‘Literary snobbery is nonsense. There is nothing wrong with wanting your readers to keep turning the pages’ 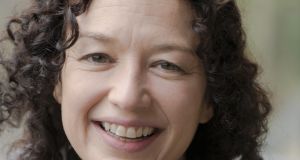 Andrea Carter: “the most important thing is to love writing for writing’s sake, otherwise there’s no point.”

Tell us about your new work and how it came about – the story behind the story.
I wanted to write a book inspired by the real and devastating floods which affected Inishowen in 2017, when bridges collapsed, and towns were cut off. The regularity of Malin to Mizen charity races gave me the idea for a charity cycle which would bring strangers to town, only to be trapped there by the heavy rain. Followed by the inevitable discovery of a body...

What was the first book to make an impression on you?
When I read The Diary of Anne Frank as a young girl, I could relate to issues she was going through: puberty, fancying boys for the first time, keeping a diary and trying to hide it from prying eyes. She was exactly like me. Except for the fact, of course, that she was terrified for her life, hiding in an attic with her family. It made the Third Reich far more real for me than any history lesson. When my grandmother found a second-hand copy of The Footsteps of Anne Frank at a sale of work, I discovered the devastating truth of what happened to Anne and her family after they were betrayed.

What was your favourite book as a child?
I’m afraid I didn’t have a favourite book; I consumed them far too quickly. Thankfully we had Portlaoise Library! I joined the library when I was three.

And what is your favourite book or books now?
The Wind in the Willows is one of the books I remember losing myself in as a child, and it’s never left me, that world of the riverbank. I still cannot walk along a river without gazing wistfully at the water and imagining Ratty in his boat and Mole losing the oar, or thinking of their picnics, “a yard of long French bread, a sausage out of which the garlic sang, some cheese which lay down and cried”.

As a writer, the book is a perfect lesson in pace: it alternates beautifully between adventure and domesticity, between wild larks and quiet evenings by the fire.

What is your favourite quotation?
The opening lines of Mister Sandman by Barbara Gowdy still make the hair stand up on the back of my neck: “Joan Canary was the Reincarnation Baby. Big news at the time, at least in the Vancouver papers. This is going back, 1956. Joan was that newborn who supposedly screamed, ‘Oh, no, not again!’ at a pitch so shrill that one of the old women attending the birth clawed out her hearing aid.”

Which Irish author should everyone read?
What an impossible question! All Irish authors! I will say that with the reissue of some older Irish titles I’m enjoying the discovery of some Irish authors whom I hadn’t known. I’ve just finished Tramp Press’s reissue of Dorothy McArdle’s The Unforeseen, which I loved.

What is the most beautiful book you own?
My Dad, who has a fondness for auctions, has taken to picking up first editions. So I now have a few beautiful books!

Where and how do you write?
I wrote my first four books sitting upright in the spare bed (terrible for the back). I now have a desk, but I still work mostly in pyjamas. I write first thing in the morning, moving from bed to laptop and stopping off at the coffeepot en route.

What book changed the way you think about fiction?
The Tenant of Wildfell Hall by Anne Brontë is astounding. Published in 1848, it deals with themes of domestic abuse, alcoholism and feminism, but has a mystery at its heart. It made me realise that literary snobbery is nonsense, that there is nothing wrong with wanting your readers to keep turning the pages.

Who influenced you the most?
I met PD James a year or two before she died, and she was so encouraging. It was before I was published, and she told me she’d been first published at 42. By the time of her death she’d written at least 20 books.

What advice would you give to an aspiring author?
Read, write and don’t give up. Bookshops are filled with books by authors who were rejected countless times before they were published. But the most important thing is to love writing for writing’s sake, otherwise there’s no point.

What weight do you give reviews?
It’s lovely to get a good one and pretty wounding to receive a bad one (I still remember the word “uncooked” from my first Sunday Times review!), but if you can’t deal with negative reviews then writing for publication isn’t for you. It’s the most horribly exposing thing to do, like walking down Grafton St in your underwear; you’re inviting people to point and stare. Not everyone is going to like what you write.

What has being a writer taught you?
To live on very little!

Which writers, living or dead, would you invite to your dream dinner party?
The Brontë sisters, Marian Keyes, and a clutch of Irish crime writers. I’d need a big table (and lots of booze for the crime writers).

What is the funniest scene you’ve read?
There’s a scene in Neil Hegarty’s new book The Jewel which had me laughing out loud (I’d been in tears five minutes earlier). It involved socks.

If you were to write a historical novel, which event or figure would you choose?
I’d love to write about Jean-Gaspard Deburau, a Bohemian-French mime artist best known for his portrayal of the character Pierrot. Deburau (stage-name Baptiste) was acquitted of murder in 1836, after killing a man who was following and taunting him. The trial was a sensation during which all of Paris crowded into the courtroom, intrigued to hear Deburau’s voice for the first time. But I’d need to spend some time in Paris to work on it.

Where is your favourite place in Ireland, and in the world?
Lagg Beach or Five Fingers Strand, Inishowen, Co Donegal. I was blown away when I first walked onto that beach (metaphorically and literally!). It’s completely stunning.
Andrea Carter is the author of the Inishowen Mysteries. Her first three books are in development for television. The fifth in the series, The Body Falls, will be published by Little, Brown UK on April 2nd.

Book quiz: Neville Shute’s On the Beach is set after what kind of apocalyptic disaster?