Alexander McCall Smith on Ireland: What would the Brother say?

The bestselling author, who once taught at Queen’s, reflects on his Irish influences, from Brian Moore to Flann O’Brien, and defends the comic novel 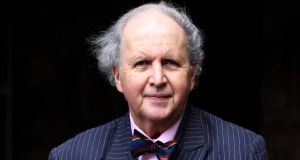 Alexander McCall Smith: “Fatty O’Leary’s Dinner Party is a jeu d’esprit. It is not meant to portray anything real about Ireland, other than, I suppose, the justly celebrated Irish love of fun. There is an extraordinary view held by many today that all novels should be realistic, hard and gritty. This is a very strange view of the possibilities of the novel.” Photograph: Andrew Milligan/PA

It is a long time since I lived in Ireland. That was in the early 1970s, when I took up my first job, an academic post, at Queen’s University in Belfast. It was a very significant time in the history of Northern Ireland – the Sunningdale Agreement had produced the first power-sharing executive, and there was widespread hope that peace might just break through the cycle of violence. It did not – at least not then – and what had become a positive time became a time of despair – for just about everybody. But in spite of that, the period of just over a year that I spent there was extremely important in more ways than one. Living in the middle of history like that heightens one’s awareness and one’s understanding. It can cause scales to drop from one’s eyes.

But for me it was more than that. It sparked my interest in the literature of both North and South. Amongst northern writers, I discovered Brian Moore, in my view a writer who deserved far more recognition than he was actually given. His Lonely Passion of Judith Hearne made a profound impression on me. Its picture of Belfast was instantly recognisable, and its central character rung completely true. Then I was introduced to a number of poets whose work I might otherwise not have explored. I read Michael Longley, whose No Continuing City I still enjoy going back to; I read many of the other Northern Irish poets who were coming to the fore at the time. And I was introduced by a friend, Nollaig MacCongáil, to the classic Irish short story.

It was in Belfast, too, that I first started to read WH Auden. I remember the precise moment when I took a copy of Auden’s Collected Shorter Poems off the shelves at the University Library and went off to read it in the Senior Common Room in College Gardens. This was the literary discovery of my life; I immersed myself in Auden’s deeply engaging, cerebral poetry, and ever since then I have travelled with a copy of that book in my suitcase. It led to all sorts of things, including a friendship with Auden’s literary executor, Prof Edward Mendelson, who wrote to me out of the blue many years later and told me he was a reader of my Botswana novels and felt that Auden and Mma Ramotswe – my main Botswana character – would have agreed with one another on many things.

Although my brief sojourn in Ireland was followed, over the years, with a number of trips to Dublin and occasional trips back to Belfast, Ireland never really featured in my writing. There were references, of course: Ireland comes into my Portuguese Irregular Verbs series of novels, and in my Isabel Dalhousie novels, set in Edinburgh, Isabel’s first husband is Irish and there are one or two Irish scenes.

One has to be very careful in writing about somewhere one doesn’t know all that well, although I think that it’s almost impossible to have literary interests and not be influenced or affected in some way by Irish culture. For this reason, perhaps, Ireland has gradually been creeping into my novels, in much the same way as has another country I like and admire, Australia. In my novel Trains and Lovers there is an Irish scene where two young Americans find themselves in Kerry. But such scenes have been incidental to main plots that take place elsewhere – mostly in Scotland.

But then some years ago I decided to write the novel about a couple of engaging and likeable Irish-Americans who visit Ireland as a 40th birthday treat. I gave the hero an outrageous name, Fatty O’Leary, and I called his two friends Porky Sullivan and Tubby O’Rourke. That gave the game away – this was going to be a romp, and a ridiculous one at that. But why not? One of my great literary heroes is Brian O’Nolan, who, as Myles na gCopaleen, wrote columns for The Irish Times that are, in my view, some of the funniest columns ever written. In my view O’Nolan would have approved of Fatty O’Leary and the utterly ridiculous things that happen to him on his much anticipated trip to his ancestral homeland. Fatty suffers misfortune after misfortune in Ireland, mostly of a thoroughly absurd nature, but ultimately he triumphs against gravity, killjoys and a spectacularly pretentious Dublin couple who condescend awfully to poor Fatty. Those two are dealt with by a dim but decent Irish peer who comes to Fatty’s rescue – a very satisfactory outcome.

Fatty O’Leary’s Dinner Party is a jeu d’esprit. It is not meant to portray anything real about Ireland, other than, I suppose, the justly celebrated Irish love of fun. There is an extraordinary view held by many today that all novels should be realistic, hard and gritty. This is a very strange view of the possibilities of the novel. Certainly one of the roles that fiction should fulfil is the portrayal of human tragedy and the bleakness of the world – but that is only one of its roles. Fiction should also celebrate joy and delight in the amusing and even absurd side of life. Magic realism, which allows for anything to happen – even things that defy the rules of physics - has its place, and romance, sheer romance, is as permissible as the seriousness of social realism.

The Ireland I wrote about is not all that different from the Scotland I portray in my Scotland Street novels. The characters are all somewhat larger than life, but are none the less popular for that. Striking a serious note may be one way of saying something about the world we live in and all its travails, but it is not the only way. One can also portray the poignant and the downright tragic through humour. You can say much about the human condition when you are writing about small and inconsequential things; you do not need the epic themes and a cast of thousands. Trollope says a lot about human nature and ordinary life without using a large canvas, as does Barbara Pym.

And we should not be afraid to poke fun at ourselves and to be, where needed, irreverent. Both Scotland and Ireland can do that. Dublin, like Edinburgh, is a Unesco City of Literature. We have that in common, along with a number of other things. Both capital cities have been aware of the limiting features of London’s cultural shadow, both have had to struggle to protect a vision of the world that may differ from that which prevails in parts of England – all of that is natural and hardly unexpected.

Scotland, of course, watches Ireland with interest and talks about what sort of state Ireland is. Recently I think that Ireland has been courageous in tackling certain darker aspects of her past. What Ireland has been doing in laying to rest its ghosts is admirable. I, for one, particularly welcome the efforts at reconciliation that people in both Ireland and Britain have made, which show all of us freeing ourselves from the grip of the past. Every high-profile handshake, every meeting of those who previously would not talk to one another, underlines how far we have come from the sterility of recrimination and hatred and how far generosity of spirit has made its presence known. As the Brother, that wonderful character in Myles na gCopaleen’s columns, would undoubtedly remark, There you have it.

British Council Ireland hosts a free reading by Alexander McCall Smith in the Abbey Presbyterian Church, Parnell Square North, Dublin, on Wednesday, May 20th, at 6.30pm, as part of Words on the Street – European Literature Night. The British Council in association with the International Writers Festival Dublin also hosts an evening in conversation with Alexander McCall Smith this Thursday, May 21st, at 8pm, in Smock Alley Theatre, Dublin. Tickets: €12, €10