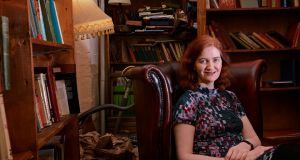 It’s not surprising that a new Emma Donoghue title generates a particularly sonorous buzz. She’s a writer who has not only built up a long and steady body of readers as a result of her impressive canon of fiction (nine novels, five short story collections, two children’s books), but she’s achieved that wildly coveted, elusive goal – the “international best seller” and the movie. Every review of her titles published since refers to Room. Constantly.

Yet her readers don’t tend to do this, partly because they’ve already been enjoying her work for 25 years, but mostly because since her well-deserved success, she has resisted the temptation of turning formulaic and instead produced several completely different books, taking us from the music halls of the wild west in the extraordinary Frog Music, to a chilly rural Ireland in The Wonder and the realms of a politically correct family commune in The Lotterys books. For her next literary trick, she does not disappoint.

1 Former solicitors ran an ‘identity factory’ in committing fraud – court told
2 Ciara Kelly: I was pregnant, unmarried, a junior doctor and I got old-school comments
3 Kanturk farm shootings: A timeline
4 Cork shootings: Postmortems on two of three family members complete
5 Son (23) who died in suspected Cork murder-suicide was due to graduate
6 Coronavirus: Too early to say if Ireland has turned a corner, warns Tony Holohan
7 Woman who lost damages case over ‘thrill ride’ must pay appeal costs
8 Cork suspected murder-suicide may have been over disputed will
9 Third person arrested in education board corruption investigation
10 Hospitals across Europe running out of beds due to ‘runaway’ Covid cases
11 Large retailers modify stores and block off non-essential products from customers
12 From the past to modernity: images of Ireland transforming
13 Carefully-revived D7 terrace with work-from-home scope for €595k
14 Back to brack: An easy Halloween bake
15 Deaths of father and sons may have been over disputed inheritance
16 US sex cult founder Keith Raniere sentenced to 120 years in prison
17 Seán O’Brien: Anger over my parents’ break-up never left me
18 Robbie Henshaw likely to be the only Irish change for France finale
19 Will the real Chuck Barris step forward . . . Hit man: fact or fiction
20 Essex lorry deaths: victims pleaded for lorry doors to be opened, court hears
21 Two hundred Irish retailers for all your online Christmas shopping
22 Vicky Phelan feels ‘betrayed’ by CervicalCheck tribunal
23 ‘Shellshocked’: Outrage in Australia after women on flight strip-searched in Qatar
24 Somali-American congresswoman ‘hates’ US, Trump tells rally
25 Don McLean on the meaning of American Pie: ‘Who cares, who gives a f**k’
26 Appeal for missing woman: 'She is my only sister... it’s still torture'
27 US election: Money makes electoral world go round as candidates spend big
28 ‘Black hair is so much more than hair’: Emma Dabiri’s passionate exploration of identity
29 Former priest who downloaded child abuse imagery jailed
30 The Irish Times view on the US supreme court: securing Trump’s legacy
31 Husband loses appeal to overturn interim barring order
32 Gardaí say 52 people who went missing in 2020 not yet found
33 Breathe easy to maximise your running experience
34 Am I crazy to consider switching to an Ulster Bank mortgage?
35 Bartomeu resigns and drops bombshell of Barcelona joining European Super League
36 How long can Government afford to keep State pension age at 66?
37 Suspected murder-suicide shooting in Cork leaves father and two sons dead
38 Matthew McConaughey: ‘I wouldn’t give back one ass-whupping for the values that are ingrained in me’
39 PTSB plays down Ulster Bank talk as it sells €1.4bn of loans
40 Olivia Newton-John: ‘For me, my cancer has been a gift’
Real news has value SUBSCRIBE