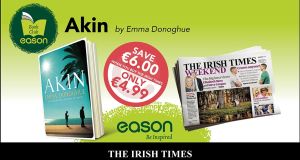 Akin by Emma Donoghue is this Saturday’s Irish Times Eason offer. Save €6 on the retail price and buy it for just €4.99 at any branch along with a copy of The Irish Times.

In Saturday’s Ticket, The Irish Times publishes its list of the Top 40 Irish fictional characters; Kathleen McMahon talks to Róisín Ingle about her new novel, Nothing But Blue Sky; and Slavoj Zizek talks to Joe Humphreys, who ponders whether Zizek is the Elvis of cultural theory or the Borat of philosophy?

Our reviews are Paschal Donohoe on Twilight of Democracy: The Failure of Politics and the Parting of Friends By Anne Applebaum; Jonathan McAloon on A Traveller at the Gates of Wisdom by John Boyne; Keith Duggan on David Kynaston’s Shots in the Dark: A Diary of Saturday Dreams and Strange Times; Niamh Donnelly on Supporting cast by kit de waal; Rachel Andrews on Catching the Worm by Wiliam Campbell; Susan McKay on Jenny Diski’s Collected Essays; Sarah Gilmartin on Saturday Lunch with the Brownings by Penelope Mortimer; Claire Hennessy on the best new YA fiction; and a new poem by Thomas Kinsella.

Writing on One features contemporary and celebrated authors reading their own writing. Among those to feature this summer are: artist and writer Sara Baume’s handiwork; Belfast-based Wendy Erskine’s story To All Their Dues; Tyrone writer Benedict Kiely’s radio essays; Rosita Boland’s essay Bali from her highly praised book Elsewhere; Offaly writer Ian Maleney’s non-fiction book Minor Monuments; and Cork bi-lingual poet Doireann Ní Ghríofa’s much-anticipated book A Ghost in the Throat. Writing on One, a six-week series, commences on RTÉ Radio 1 on Saturday, August 1st at 7 pm - 8 pm. The series is produced by Clíodhna Ní Anluain.

Sinéad Morrissey has been honoured with Gdansk’s European Poet of Freedom Literary Award 2020 for ler latest collection, On Balance, translated by Magda Heydel. The jurors recognised the way the poet travels between different cultures, her impressive knowledge of the world, and the ability to speak the languages of various poetic forms, which echo both the fascination with folk imagination and modern science. The award ceremony will take place on August 31st in Gdansk, while an open meeting with the winners – the poet and her translator – will take place the next day.

Dara McAnulty has been shorltisted for the Wainwright Prize for nature writing for his acclaimed Diary of a Naturalist, published by Little Toller. Also shorltiated were The Frayed Atlantic Edge by David Gange (William Collins); On the Red Hill by Mike Parker (Cornerstone, Penguin Random House UK); Dark, Salt, Clear by Lamorna Ash (Bloomsbury); Native: Life in a Vanishing Landscape by Patrick Laurie (Birlinn); Dancing with Bees by Brigit Strawbridge Howard & John Walters, illustrator (Chelsea Green Publishing); and Wanderland by Jini Reddy (Bloomsbury Wildlife). The winner will be announced on September 9th.

The Well Review has announce the names of its two scholarship awardees for its first 12-week non-fiction masterclass, The Shadow in Six Ways They are Rita Hynes from Drogheda, who has worked as a bookseller and events manager for bookshops, literary festivals and publishing groups in Ireland and Scotland, and Grace O’Doherty from Wicklow, whose work has appeared in Banshee, The Honest Ulsterman, Poetry Bus and Poetry Ireland Review. There are limited places still available for the course, which starts on August 6th.

The Arts Council’s prestigious Next Generation bursary has been awarded to 23 artists in the fields of music, dance, film, theatre and literature at an early, pivotal point in their careers. Each will receive €20,000, in effect to buy time to develop their practice.

Artists will also take part in a collective week-long residential programme in the Tyrone Guthrie Centre at Annaghmakerrig, Co Monaghan, in early 2021. Arts Council Director Maureen Kennelly said the agency had received a large number of applications for the award this year, and that the standard had been particularly high. “All of these artists have demonstrated an exceptional ambition and vision for their work, and the Arts Council is delighted to support them,” she said. “I look forward to following them in their work over the coming years.”

Red Line Book Festival announced that award winning writer and translator Keith Payne has been appointed as the festival’s 2020 Writer-in-Residence. As part of his residency, Payne is seeking participation from those living in the community in Tallaght, to join him in a series of workshops titled: Connection Reset 24: Attention Equals Life. Workshops will begin the week of August 17th and run for 10 weeks up to and beyond the week of the 2020 Red Line Book Festival. Register your interest by emailing wir@redinebookfestival.ie before August 12th.

Carcanet Press has announced the appointment of John McAuliffe to the role of Associate Publisher for a period of six months from August 1st. John will share editorial duties with Michael Schmidt and the managing editor, Andrew Latimer; he will also be looking at the press as a whole, to consider the impact of lockdown and how it will continue to develop its new poetry and classics lists.

John is based in Manchester where he is professor of poetry at the university. Chief poetry critic at The Irish Times from 2013-2020, he founded and co-edits The Manchester Review and directs The Centre for New Writing and its long-running Literature Live reading series. His five books with The Gallery Press include most recently The Kabul Olympics (2020). He will be taking a break from reviewing for The Irish Times to concentrate on the new role. Martina Evans and Seán Hewitt will alternate as poetry reviewers each month.

Boys Don’t Cry is described as the heartbreaking story of two brothers ripped apart – and how one of them will face growing up without the other.

Joyner said: “Fíona Scarlett’s novel pretty much did it for me. It’s a great big beating heart of a novel, from an incredibly talented young author; the tale of two brothers and the stories they can’t escape. Boys don’t cry? Well, we shall see – this editor cried buckets.”

Scarlett said: “I am absolutely over the moon that Boys Don’t Cry has found such a wonderful home at Faber with the fabulous Louisa Joyner. To work with Faber is a dream come true and I’m beyond excited for the road ahead.”

Scarlett is a primary-school teacher from Dublin and holds a masters in creative writing from the University of Glasgow. She recently received a Literature Bursary Award from the Arts Council of Ireland. Boys Don’t Cry is her debut novel.