The Bull Wall: The history of a Dublin landmark 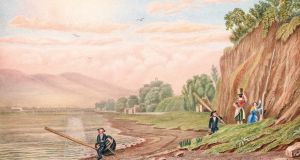 The bridge to Bull Island

In 1814-15 Miss Ann Plumtree spent time in Dublin. She wrote: “Another pleasant day’s driving during my stay in Dublin was spent in a party to Howth … the road runs for a long way at the edge of the North Bull (Sandbank) and about a mile from the town passes by Marino … This latter is more interesting as it passes through the village of Clontarf. It is not advisable to take this road at the flow of the tide, since it is at the very edge of the water; and in some cases scarcely wide enough to allow two carriages to pass. At low water, there is ample space of sand, enough for a legion of carriages to go abreast.”

After the North Great Bull Wall was built between 1819 and 1824 and the then-enormous embankment was put up across the strand to facilitate the Dublin and Drogheda Railway in 1844, the Tolka River still ebbed out through the outer of the two arches seen today as a dual carriageway on entry to Clontarf.

Look at the two attractive early Victorian houses across the road; these replaced the Royal Hibernian Marine School, which housed young boys who were raised in the Protestant religion. One of several such institutions in Dublin, this one was well outside the city when built in the late 1700s.

The promenade along Clontarf has been filled in and prettified for today’s walker, giving a good view of how the city and port developed. As we stroll along, we can identify the location today at the Port Tunnel where Clontarf Island once existed – nearly 15 acres on accumulated sand, used in the 17th and 18th centuries for quarantine purposes to keep plague out of the city. The island eventually vanished owing to predation for material.

At the junction of Vernon Avenue, note the stone cairns in the water – the last of an original seven. These were erected by John Vernon to mark the boundary of his land because of a dispute in the 18th century over material washed up on the shore from the new wall being built in timber towards the Poolbeg Lighthouse. The row escalated and even went to the House of Lords in the Irish Parliament.

Approaching the Bull Wall wooden bridge, see the rise opposite: this is where the last of Daniel O’Connell’s monster meetings was to be held in 1843. It was cancelled because the government claimed that it was a serious threat to security, and they put the guns on the South Wall (still on site in Ringsend) on high alert to shell the people from the fort we see today.

The wall was necessary for several reasons. In the first place, the bay did not offer enough shelter for shipping, and there was the problem of crossing the bar to get shelter behind the South Wall. In any kind of easterly gale anchors could not hold, and the double tragedy of the loss of almost 400 souls off the rocks along the southern shore gave a frightening illustration of the hazards. Howth Harbour, when finished, did not deliver what was required, and it was decided that Dunleary was the best option. In the meantime the Port decided in favour of a second wall.

The question then became where to locate another wall to enclose the outer harbour of Dublin. Eventually the Port decided to go with the plan of Francis Giles and the builder George Halpin. The task was completed in less than four years, compared to just under a hundred years for the South Wall. There is a myth that Captain William Bligh, infamous for his Bounty voyage, designed or built the North Bull Wall. He did not; he was dead before it even began. He did, however, make proposals for a wall elsewhere in the Liffey.

The wall itself was built in less than four years because the builder, George Halpin, realised that men could not sustain a six-mile walk twice a day and a full 60-hour week. He persuaded the Port to buy a ship to use as a floating hostel. The Alexandra of Petersburg was fitted out and placed on site, and the men lived and worked there.

The records can be found in two volumes newly discovered in the basement of the Four Courts when I was researching my book Dublin Moving East, and they include details of expenses for clothing, bedding, beer and food. The ship was used as a hostel for three years before Halpin built a shed on the Bull Wall to accommodate the men. The stone was mainly shipped across the bay from Dunleary by raft, and the records show that the men worked through Christmas holidays and round the clock, as weather and tide permitted.

The wall itself is quite narrow and not very high and is cut across the tip of the North Bull, still visible today at low tide from the shore/promenade. The last section appears to be unfinished; this is because 200 years ago its builders knew and appreciated the gigantic forces that would be unleashed by the extreme volumes of water using such a narrow exit on an ebb tide. The unfinished wall allows the initial push of the early tide to leave across the lower section, acting as a safety valve. Otherwise the wall might have been simply pushed aside by the force of the water. The engineers confirm that even today the South Wall shows actual movement on occasion – small, yes, but real nonetheless.

In tandem with the wall’s construction, the bar was dredged by the dredger Patrick, a steam vessel operating in Dublin after the first steamship had been seen only four years previously; another, more powerful version had been ordered by the time the work was completed. As a result, the harbour of Dublin became deeper and more accessible. Steamships became numerous, transforming trade, mail and passenger services.

Because of the wall, Clontarf became a much more desirable place to live away from the city, which had now expanded out past North Strand, Ballybough, Fairview and Marino – all new territory for the city to grow into and occupy. The last great work imposed on the city in its expansion would be the Dublin and Drogheda Railway, crossing the same space just 20-odd years later.

Dublin Moving East: How the City Took Over the Sea, by Michael Branagan, is published by Wordwell, €35