Akhil Sharma on his debt to Hemingway and Robinson Crusoe

A Q&A with 2016 International Dublin Literary Award winner: Reading taught me you will regret being cruel, not being kind 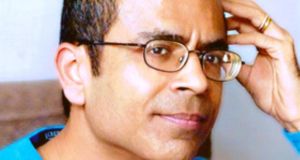 Akhil Sharma to aspiring authors: “Don’t do it! And if you are going to do it, take joy in the satisfactions that come from writing and don’t wait for the book to be done to be happy”. Photograph: Bill Miller

Born in India and raised in the US, Akhil Sharma is the author of An Obedient Father, for which he won the 2001 PEN/Hemingway Award and the 2001 Whiting Writers’ Award. His short story, Cosmopolitan, was anthologised in The Best American Short Stories 1998, and was also made into an acclaimed 2003 film of the same name. Gary Shteyngart, Kiran Desai, and Mohsin Hamid are among his many champions and Family Life, his new novel, is generating a phenomenal buzz. The New Yorker has twice run excerpts. The story of how a family copes with their gifted son’s calamitous accident, Family Life (Faber, £14.99) is, according to the Observer, “a delicate and often moving work of palliative poetics, based on a calamity that befell his own brother”. It has won the 2016 International Dublin Literary Award

Robinson Crusoe. I read the book soon after I came to America as a child and when I was feeling overwhelmed. The book for me was a fantasy of pleasurable isolation.

A diary that someone gave me when I was five or six years old in which I tried to write a novel about a submarine captain who possessed a rare pearl. For me, this submarine captain almost felt like a real person and someone whom I had responsibilities to.

A Farewell to Arms by Hemingway, Father and Son by Edmund Gosse, Sons and Lovers by Lawrence, Chekhov’s stories, Pushkin’s stories.

“Most folks are as happy as they make up their minds to be.” Abraham Lincoln

Father Karamazov. I love how he goes around to his neighbours telling them that his wife beats him.

Annabel Davis-Goff. This extraordinary novelist and memoirist has not written much and so it is perhaps the lack of quantity that has allowed her to fall through the cracks.

Traditional always, except there are some minor works by great writers that are easier to find as parts of collected e-editions than in print.

An annotated guide to The Picture of Dorian Gray. The illustrations are luscious.

I spent a great deal of time interviewing people for my first novel, An Obedient Father.

A Farewell to Arms by Ernest Hemingway.

The Jeeves novels. An 18th birthday should be full of laughter.

Don’t do it! And if you are going to do it, take joy in the satisfactions that come from writing and don’t wait for the book to be done to be happy.

Good editors are essential in making a good book better. And because there is so much noise in the system from all the books that are produced, editors as public champions are necessary.

How lucky I am.

Chekhov, Tolstoy, Dostoevsky (because they would enjoy spending time with each other), Hardy (because I would love to meet him), and Shakespeare (because he is the sun and we are all dust next to him)

Anything in the Jeeves novels.

Lately it has been patient.

I am writing a short story on Lincoln.