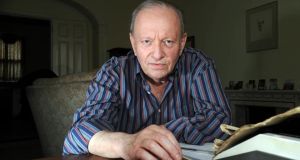 Derek Mahon: there is a marked consolatory note in nearly all his latest poems.

Book Title:
Against the Clock

The muse is a capricious drab, fickle in her comings and her goings, but it can be said for her that at least she is not ageist. Derek Mahon in the title poem of his superb, thrilling and fizzingly exuberant new collection draws our attention to the old stagers who gave her the glad eye and were rewarded for their tenacity and presumption. Having mentioned Sophocles, 90 when he wrote Oedipus at Colonus, and Ovid, banished to the Black Sea coast but “who fought on for a reprieve”, Mahon calls out the roll of honour:

“So many exiles! So many reprobates!-

for whom, to their credit, it was never over:

who sang to the black nights.”

Mahon, who was born in Belfast in 1941 – “(phew!)”, as he exclaims – published his first collection, Night-Crossing, in 1968, and went on to become recognised as a singular and ringing voice among what was a golden generation of “Northern poets” that included Seamus Heaney, Michael Longley, Seamus Deane and, at something of a stretch, John Montague, 12 years Mahon’s senior, and also, stretching in the other direction, Paul Muldoon, 10 years his junior. After schooling at the Royal Belfast Academical Institution – the fabled “Inst” – Mahon went on to study in Trinity College Dublin, and at the Sorbonne in Paris. He lived and worked in London for some years, then returned to Ireland and eventually settled in Kinsale, where he now lives.

The volumes he published between 1968 and the mid-1980s, including Beyond Howth Head, Courtyards in Delft and The Hunt by Night, contained transcendently fine and beautiful work. There are critics who will claim, surely with justification, that A Disused Shed in County Wexford is the greatest single poem by an Irish poet since Yeats. Indeed, one of his contemporaries speaks of reading it when it was still in typescript and announcing to his wife that he was going to give up poetry altogether, so impressed was he by Mahon’s mastery – he changed his mind, though, to our great benefit.

In the intervening years, Mahon wrote copiously, and published widely. The Yaddo Letter (1992) and The Hudson Letter (1995) were particularly notable. Much of the work of these years might be considered “public poetry”, in which the poet concerned himself with issues of the day, social, political and artistic. The poems, many of them gathered into sequences, bristle with names of people and places and the dates and occasions of public events – “Radio and TV/spoke of El Niño”; “in the moon shadow of the World Trade Centre”, etc – so that one is reminded of late Auden, and even perhaps of Billy Collins and other “colloquial” poets of the day.

Yet there was, in Mahon’s middle period, the slight impression of a poet making brilliant poetry but also marking time. A number of great artists experience a tremendous blossoming towards the end – Yeats and Janacek are two such that spring to mind – and many of the poems in the tellingly titled Against the Clock sound a note of surprise at and gratitude for a resurgence of facility and an infusion of unlooked-for, late grace. Olympia, as intricate and elegant a virtuoso performance as anything Mahon would have executed in his salad days, is a witty paean to his typewriter:

ribbon and paper glimmering. I wait,

she waits, for a first word to communicate

itself with a hesitant beat

to the white sheet.”

The poem is as light as the tap of a fingertip on a keyboard – though goodness knows there was nothing very light about those old manual models – yet it manages to communicate something of the heat and urgency of artistic creation, while maintaining the classical restraint which was the mark of Mahon’s poetry from the start. Olympia, a goddess and a machine, bears him onwards through

jazzing it up again as

in the great days.”

One can almost hear the “clackety clack” of “the dance/of keys”, and the ageing poet’s cackle of delight at his refound energies.

The writing in these poems is not really “late style”, as considered by Edward Said in his book of that title, which, in Said’s version of it, tends to generate masterpieces that nevertheless are broken or incomplete – the Aeneid, Bach’s final fugue, Proust’s À la recherche – but rather a return to earlier powers. There is nothing in late Mahon of Yeats’s “why should not old men be mad?”, for although the poems in Against the Clock return again and again to the theme of age and ageing – “Now that you’re seventy-five,/sails idly fluttering . . .” – there is a youthful spring to the metre, and an almost boyish, mischievous joy in the handling of language and the devising of imagery:

finished at last, but that wasn’t the end,

was it, since we’re obliged to stick it out

until the pen falls from the trembling hand;

so just get on with it.”

There is a marked consolatory note in nearly all the poems here. The light is not dying but resurging, and even when it does begin to fade we feel it will not be raged at but accepted as a part of the natural order of things, the precursor to another Ovidian metamorphosis. The collection is wonderfully varied. There is a poem to the poet’s daughter, one on Hurricane Ophelia and one on Being a Dog; there is even a lament on the Time of Trump. All testify to the unflagging spirit of one of the very finest of Irish poets, living or dead, “still singing, still going strong”. Against the Clock gives cause for national celebration.