Adam White: From turning wood to turns of phrase

After a dip in work, carpenter Adam White discovered his gift for poetry – and now his first collection is up for a major prize 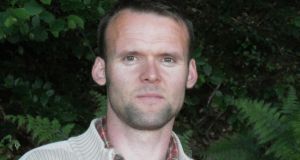 Once a carpenter, poet Adam White is still inspired by construction: ‘I tend to try to recreate the woodwork, the sounds and smells and pleasures of it, in the writing’

Poetry and carpentry may seem worlds apart but for Adam White, shortlisted for a prestigious poetry award, both crafts require an apprenticeship and great attention to detail. White, a native of Youghal in Co Cork who is based in Normandy, is in the running for the Felix Dennis Prize for Best First Collection of Poetry, worth £5,000.

This prize is one of three categories in the Forward Prizes for Poetry competition. Previous winners include Seamus Heaney, Ted Hughes, Thom Gunn and Carol Ann Duffy.

The 34-year-old’s collection of poetry, Accurate Measurements, was published in April by Doire Press, an independent publishing house in Galway. The book contains a number of poems that are about the intricacies of woodwork.

With the downturn in the construction industry, White says that he has nostalgia for this sector. “I tend to try to recreate the woodwork, the sounds and smells and pleasures of it, in the writing.”

White is up against five other poets: Dan O’Brien, Steve Ely, Emily Berry, Hannah Lowe and Marianne Burton. A winner will be announced on October 1st at the Southbank Centre in London and prizes will be awarded by the novelist Jeanette Winterson.

Writing lyrics
White never set out to be a writer. As a teenager, he wrote lyrics for songs. “They didn’t make much sense. I just liked the sound of words and rhymes.”

After serving a four-year apprenticeship as a carpenter, he embraced the work full-time. When the economy started to falter and work became scarce on building sites, White signed up for an arts degree in English and French at NUI Galway as he had always been interested in English literature.

In his final year in 2009, White attended a seminar on modern Irish poetry, which involved close readings of the work of poets such as Heaney, Derek Mahon, Medbh McGuckian, Eavan Boland and Michael Longley. “As soon as I started reading these poets I said, ‘Jesus, I’ll have to try this.’ When I see people doing things that I like, I tend to try it for myself.”

A friend suggested that White attend the North Beach Poetry Night slam in Galway’s Crane Bar, run by John Walsh and Lisa Frank of Doire Press. Budding poets had to read two poems at each session.

Seeking perfection
White, being something of a perfectionist, decided that if he was going to read to an audience, the poems “had better be good poems. The quality of the stuff I was reading at university made me aspire to write as well as I could.”

He wasn’t comfortable with the aggressive delivery involved in “slamming” poetry, opting instead to recite his work in a heartfelt way. Walsh and Frank encouraged White to keep writing.

“After a while, they said that if I ever had enough poems for a collection, they’d be interested in publishing it. I didn’t have to go looking for a publisher. I was very lucky that things fell into place.”

As well as writing poetry, White teaches English in Normandy where he lives with his French girlfriend. “There’s only two of us in the house. When Karine goes to work and I have a day to myself to sit down and write, it can be pretty lonely. I miss working with a team and having the craic and the banter on the building sites.”

But White is a dedicated writer who says he has served a four-year apprenticeship in the art of poetry – the same length of time it took him to qualify as a carpenter.

When he has an idea for a poem, he allows it “to go around in my head, gathering momentum.

“By the time I get the chance to actually sit down and write, it’s ready to spill out. I can get it all down in an hour or two. Then, I spend a couple of hours tidying it up. I leave it alone for a few days and write a second draft, and a few days later, a third draft.

“I write about five drafts in all. Writing more drafts would be overkill. I’d lose interest in it if I had to do that.”

White expects that his second collection of poetry will take at least three years to complete. He has an idea for a book but doesn’t want to disclose it at this early stage. Accurate Measurements is not just about construction and the metaphors it lends itself to. “I don’t think it would have been very interesting if I had 60 pages about building. So the book also has poems about my family, nature, travelling; there are three love poems as well.”

Continuing apprenticeship
While White likes to draw a line under his apprenticeship to poetry, he is constantly reading the work of poets he admires, to improve his own writing.

“I’ve read more Heaney than any other poet and I like the work of Ted Hughes as well. I really admire Heaney’s poems about farming and what’s going on around the house, such as the making of butter. I like his technical descriptions about how things are actually made.”

White’s title poem is about the hanging of a door, describing the process from start to finish. “You could compare hanging a door to writing a poem. It’s about crafting something. Also, a door is a way in.”

And for White, the “way in” that he is now most interested in is the one that leads to creativity.