Acts of Allegiance by Peter Cunningham: Signs of a great writer

A sharp reminder of what evil can be done in the name of good, and how condescension and arrogance can lead to disaster 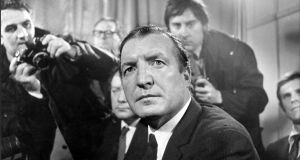 Charles Haughey is flanked by photographers at a press conference in Dublin, following his acquittal in the Arms Trial in October 1970 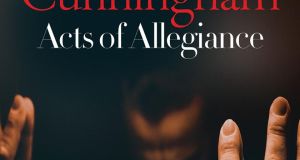 “What man are you at the end of the day, Mr Ransom?”

This is the question that torments Marty Ransom, the hero of Peter Cunningham’s masterful novel Acts of Allegiance. What man is he? An Irishman? A good husband? A loyal civil servant? A spy? None of the above?

Cunningham takes the reader back and forth through Ransom’s life, from the 1950s to the bleakness of the Troubles and beyond. Ransom grows up in idyllic rural Waterford on a country estate named Waterloo. It’s a glamorous lifestyle, but one based entirely on an illusion: Marty’s father, Captain Ransom, is far from the Anglo-Irish gentleman he aspires to be. His surname and the Waterloo property come from his wife’s side. In reality he is Paddy Kane from Fowler Street, Waterford. Marty’s childhood is divided between the freezing but elegant discomforts of Waterloo and the close quarters of the little house on Fowler Street where his grandmother lives with aunts and uncles and Marty’s cousin, Iggy Kane. Marty dreams of being just like Iggy, a born troublemaker. Iggy has a gift for working with his hands, whereas Marty only has an Anglicised accent and a ticket to boarding school in England.

Issues of class, of background, of loyalty: Cunningham is superb at evoking the uneasiness of Ransom at all ages in negotiating the social minefield. He is a tentative character, unsure of other people’s motivations and indeed his own. But that very uncertainty is what makes him malleable. After serving in the British army like his father, Ransom is pushed into the Department of External Affairs where he barters successfully with the British to secure economic opportunities for Ireland in the bleak post-war period. But the British have an agenda, and Ransom is useful for their purposes too.

The fate of the two countries is tied together by a long history. One side barely remembers it while the other cannot forget it, and in the middle stands Ransom, unsure which way to face. By an accident of birth and upbringing he has connections with both the British establishment and those who seek to counter them in Northern Ireland. The complexity and inequality of the Anglo-Irish relationship is laid bare here, but subtly; for one English character “Ireland seemed nothing like a foreign country to her; yet the fact that it was clearly intrigued her”. It is unknown and unknowable, brutal at times, brutalised beyond peace.

Acts of Allegiance follows the events of history closely: here is Bloody Sunday and national outrage, there is Charlie Haughey, lording it at the races in Paris, opening back channels of communication with the IRA as a power play. Cunningham doesn’t get bogged down, sketching in the details of what really happened, keeping the narrative tightly focused. Ransom’s obsessions are the novel’s preoccupation and for the edgy, self-absorbed protagonist, key figures of history pass by without being accorded particular significance beyond how he, Ransom, may appear in their eyes.

The plot slips back and forth from one decade to the next, foreshadowing trouble, shading in details that make sense of what has gone before. The significance of the scattered vignettes emerges gradually and indeed some of them are notable chiefly for the beauty of the language. Cunningham has a lyrical way with description: “the big triangular field was nailed like a pennant to the throat of the mountain” conveys the entire scene and so much more.

At the heart of this book is a son striving to live up to his father: to be as brave and as insouciant and charming as a man whose flaws are tragically visible to everyone else. “You’re like a man who’s been hollowed out,” one character says to Marty. The trouble with following his perspective is that, at times, some emotional affect is lacking. It’s entirely in keeping with the skilful characterisation, but it’s a risk all the same. However, the plot engages where the protagonist might not. This is an intricately structured novel.

It is also a timely novel, as the United Kingdom arrives at another crossroads that might affect Ireland for better or worse, though the book contains far more than an echo of Brexit. It’s a sharp reminder of what evil can be done in the name of good, and how condescension and arrogance can lead to disaster. The sign of a great writer is to take the personal and specific and draw out what is universal about it, and Peter Cunningham achieves this with tremendous skill.

‘This could be Belfast in 1968’: How political conflict in the US could descend into violence
Real news has value SUBSCRIBE