A window onto the world of Mark Twain 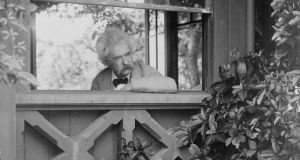 Samuel L Clemens, better known after 1863 by his pseudonym, Mark Twain, made several attempts to write an autobiography. He discarded hundreds of pages but kept enough to show that he had failed. In 1904 he tried an almost new method, dictating his thoughts at length to his secretary. In January 1906, when he had crossed the frontier into his 70s, he started taking the method more seriously, dictating for a few hours nearly every day. He was pleased with the results. “I am tired of the pen,” he soon decided.

But he gave himself three concessions.

One: he ordained that the materials he produced must not be published in their entirety until 100 years after his death. (Born on November 30th, 1835, he died on April 21st, 1910.) “I am speaking from the grave,” he told himself with evident satisfaction. In the event, three of his biographers ignored this quaintness, especially as he published several pieces himself in the North American Review as soon as the ink of dictation was dry.

Two: he held himself free to talk about anything that came into his mind, regardless of order or sequence. Other autobiographies patiently and dutifully follow a planned and undivergent course through gardens and deserts and interesting cities and dreary solitudes . . . but this is not that kind of autobiography. This one is only a pleasure excursion, and it sidetracks itself anywhere that there is a circus, or a fresh excitement of any kind, and seldom waits until the show is over but packs up and goes on again as soon as a fresher one is advertised.

Three: he acknowledged no limit of wordage. Between January 9th, 1906, and the end of March he talked enough to fill 264 pages of the first volume – published by the University of California Press, with 267 pages of notes, in 2010, on the dot of the embargo. Between April 2nd, 1906, and February 28th, 1907, he dictated enough to fill 456 pages of the second volume, entailing 206 pages of notes. The notes in both volumes are fine – well worth the price.

Satire
Twain’s style in dictation was that of the lecturer, except that he permitted himself from the grave many freedoms of satire that he would not have offered from the podium. He was a celebrity of the platform even before the publication of The Adventures of Huckleberry Finn in 1884 made him still more celebrated. After that he lectured all over the world and lived high in places of choice: France, Switzerland, Italy, Germany, Sweden, Austria, Australia, New Zealand, India, Ceylon and South Africa, returning from Bermuda to die at home in Redding, Connecticut. Everywhere, people paid good money to see him, hear him, and – the final touch – to shake his hand.

His style on the platform was colloquial but decorous, he limited himself to one laugh per lecture, and he rejected every temptation to sound like Huck or Jim or Tom Sawyer. He was also much in demand as an after-dinner speaker. He lived well, met everybody: the prince of Wales, Kipling, Henry James, Shaw, Henry Irving, Thomas Edison, Kaiser Wilhelm II, Robert Louis Stevenson – every big name you could think of. To be brief, he was a swell. But, as TS Eliot wrote of him:

As Tom Sawyer grew up, he wanted success and applause. He wanted prosperity, a happy domestic life of a conventional kind, universal approval, and fame. All of these things he obtained. As Huck Finn he was indifferent to all these things; and being composite of the two, Mark Twain both strove for them, and resented their violation of his integrity. Hence he became the humorist and even clown: with his gifts, a certain way to success, for everyone could enjoy his writings without the slightest feeling of discomfort, self-consciousness or self-criticism.

Twain might easily have afforded the life that Eliot attributes to Tom Sawyer. The lecture circuit was lucrative. He arranged gratifying contracts for his books. He would have been rich if he had not insisted on pursuing dud investments – the Paige typesetter – and throwing away good money to sustain them. Then there were expensive illnesses in the family, and the notion that the sick one could be cured by moving her – usually her – from place to place, country to country. Twain’s wife, Livy, died at 34, their daughter Susy at 24, their daughter Jean at 29. Only Clara survived, dying at 88.

This autobiography is not all circuses and pleasure excursions. Twain spent several afternoons denouncing the God in whom he did not believe, making fun of the Immaculate Conception, which should not have concerned him much, and grovelling before the despicable General Grant. Quoting one of his favourite books, Suetonius’s Lives of the Twelve Caesars, he said, as if he were teaching a room of undergraduates and playing for laughs: “In those old Roman days a gentleman’s education was not complete until he had taken a theological course at the seminary and learned how to translate entrails.”

He had justly appreciative things to say about Helen Keller and justly vitriolic things to say about King Leopold II of the Belgians. The nonsense of phrenology occupied him for several wasted afternoons, followed by the equal tedium of palmistry. He liked his fellow writer Bret Harte at first but soon got over it and kept Harte’s every defect of character in mind for the right occasion to reveal it. But he sometimes described a person in terms that a biographer might weigh, though there is nothing quite as fine in the second volume as Twain’s account of Theodore Roosevelt in the first one – “his newest interest is the one that absorbs him” – an assessment that would also have applied to Twain except that in his case, unlike Roosevelt’s, it rarely mattered. Three months later, on April 3rd, 1906, Twain returned to Roosevelt with further evidence, calling him “far and away the worst President we have ever had”.

Twain had something to say about everything. He was well disposed to new gadgets, especially the telephone and less so the typewriter, though he employed a machinist to type out The Adventures of Tom Sawyer. He first saw a typewriter, he reports, in Boston in 1871 and got a demonstration in which the typist did 57 words a minute. On the platform, by his own count, Twain talked 100 words a minute.

These professional matters come into his mind quite often, and they account for some of his drolleries. My favourite one in the second volume is provoked by the London postal service. During one of Twain’s year-long residences in London, he rented Dollis Hill House, a splendid farmhouse with six acres of lawn – splendid except that it lacked a telephone. Twain wonders how Gladstone, who lived in that house for a spell, contrived to run the British Empire without a telephone. Twain couldn’t run a small establishment without one. Every day or two he wanted to place an order at Whiteleys, the largest department store in the city:

“We can’t telephone him, we can’t telegraph him, we must do everything by letter – and give him a day and a half in which to fill the order. Our nearest telegraph office is two miles away, the post office which attends to our mails is further, the postman comes to us but twice a day – 9am and 5pm. A letter sent to our pillar-box at any hour in the evening up to 11 will reach Whiteley next morning, but not earlier.”

No sage
Twain was a great writer in one book. Not much of a sage, he found a few themes that are still worth thinking about long after he talked them up. One is the alleged Americanisation of Europe. He was not the first or the last to have this thought or to use this word to nail it down, but he used it with pretended zeal: “Steadily, continuously, persistently, we are Americanising Europe, and all in good time we shall get the job perfected.”

Sixty years later the critic FR Leavis, tired for the moment of using the shorthand word “Americanisation” to denote everything he deplored, told readers of the Times Literary Supplement that “the problem is one of cultural disinheritance and the meaninglessness of the technologico-Benthamite world”, poor Bentham having to take all the blame for the triple triumph of the United States, science and money.

Twain’s second theme, among many for thinking about, is “the process which will turn our republic into a monarchy, and how far off that event may be”.

When I first read that passage I thought Twain was joking, but a few nights ago I saw on television a photograph from the archives of President George W Bush accompanied by Dick Cheney, Donald Rumsfeld, Paul Wolfowitz, Condoleezza Rice, Colin Powell and Douglas Feith. That seemed to resemble a monarch and the most sinister aristocrats of his court, hot for invading Iraq. It was some consolation to remind myself that such a gang could only hold empire, at worst, for eight years. But that is small consolation. Eight years is too long to have any Bush or Cheney in the White House.