A war of attrition: Eileen Battersby on The Winter War, by Philip Teir

Review: A bland Scandinavian debut novel about a failing marriage – and a hamster – demonstrates just how difficult it can be for writers to make the ordinary compelling 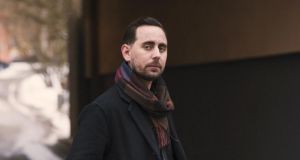 It can’t be particularly easy for a man to step on a hamster, unless of course the hamster happens to be ill or unusually slow. In The Winter War no details about it are given aside from the fact that it’s a pet. There is no explanation of why a hamster would passively succumb to death through being trodden on by a barefoot, late-middle-aged human startled during sex. But the Finnish-Swedish writer Philip Teir does not appear to pause for thought in his bland, cliched debut novel about a failing marriage in contemporary Helsinki.

Max Paul is a sociologist whose subject appears to be sexual habits and lifestyle studies. Predictably, his sex life is nonexistent. Pause for canned laughter . . .

Max is about as dull as it is possible to be while still being technically alive. He plays tennis and frets about the approach of his 60th birthday. The dread event is the one thing that preoccupies him, although it is not the birthday so much as how something as mundane as age could possibly be happening to him. His attention is slightly diverted when the chance of an unlikely affair begins to surface.

The hamster that features in the opening line presides over the action, such as it is. It settles into a variation of Banquo’s ghost and is very important for Teir, too important. He has seized on the dead pet as a narrative device in a novel that swaggers from one calculatedly self-regarding nonevent to the next. Rarely have so many almost-funny one-liners, lame stretches of dialogue and flat sitcom situations been gathered between the same hapless covers. Even the expected Tove Jansson moment falls flatter than a pancake.

The Winter War, which takes its title from the skirmish between Finland and the Soviet Union in 1939, is about the small conflicts that dominate daily life, with particular emphasis on relationships. A quote from Strindberg prefaces the novel: “And yet those trivial matters were not without significance in life, because life consists of trivial matters.” It more or less sums up a book that struggles to find a consistent tone or even a glimmer of individuality.

Hamster in the deep freeze

If this seems harsh, blame the publicity given to a Scandinavian review that pretty much compared this lame fare to the work of the US masters Richard Yates and John Updike. Teir simply lacks the visceral power of Yates, and – allowing for the challenges of translation – there is nothing to suggest that Teir’s functional prose has the sensuous virtuosity of the great Updike’s.

It all begins – for the humans, that is – at a supper party during which Max studies the other guests. Also present is his wife of many years, Katriina, who is drinking a lot, apparently as usual. So is she an alcoholic? We never find out, because Teir quickly moves on. This happens throughout: a suggestion is made, an allusion, a possibility arises. Is Max’s son-in-law about to have an affair, with a man? Who knows? Seeds are planted, but nothing happens.

The Winter War is an extended act of attrition. Max is writing a book about the Finnish sociologist Edvard Westermarck, and he is having difficulty bringing all the material together. At least this is the opinion of Matti, his publisher, who informs Max late in the narrative that publication is to be deferred: “You have the biographical details more or less under control, but there’s still something I’m missing . . . It needs to be more anchored in the context of the era, or maybe there should be a little more about the fact that he was probably gay . . . I don’t know.” Max’s book sounds as half-hearted as Teir’s novel reads. Nothing is made of the fact that the Paul family dog is named Edvard, one would like to think in honour of Westermarck.

The characterisation of the daughters is lazily handled: Helen is a teacher and is sufficiently sensitive not to speak to her parents for two weeks following the discovery of the frozen hamster, formerly the property of her cardboard-cutout children. Helen also grieves for her grandmother while the woman is still alive. Eva, on the other hand, is fleeing the memory of her former boyfriend’s wedding, at which she had flirted, unknowingly, with the bride’s brother.

Yet the Paul family is not fully dysfunctional; just not interesting. Katriina may or may not be slightly hysterical, yet this, as with so much else, is never fully developed. She used to make inappropriate sexual comments when her daughters were growing up; nowadays she is capable of grabbing her husband’s crotch. She is also a control freak, eager to plan a funeral luncheon before the death occurs.

Teir has created a married couple caught up in a war of their own: a man fearing that he is disappearing and a woman who thinks she is invisible. Yet he does little with them. If ever a novel were suspended in a state of wordy inertia, it is this tentative effort, which merely shows how difficult it is to do ordinary well. Jonathan Franzen is no Updike, and Philip Teir is definitely no Franzen.

Early on, Katriina is said to see marriage as “a form of reciprocal tyranny”. For her, marriage offers few options, which seems odd for a woman with a career. “Being married to Max was like floating on a raft in a comfortable climate and occasionally going ashore without realising that you had been missing civilisation . . . Over the past few years she’d also learned to appreciate her solitude, a sense of simply drifting aimlessly, without constantly yearning for the sight of a harbour.”

Throughout, there is a feeling that something is not quite right. Even Laura, the young femme-fatale journalist living in squalor, Max’s former student, is neither quite nice nor quite sinister enough to be anything but yet another of Teir’s haphazardly conceived characters.

But the book’s major weakness is the flat language, combined with weak jokes and robotic dialogue. It takes flair and a subtle degree of empathy to make the ordinary compelling, and there is insufficient evidence of either in this novel to justify making the effort.