A night on the tiles

What more natural challenge to set during Dublin Writers Festival than to play Scrabble against The Irish Times? 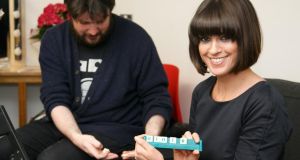 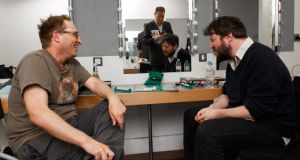 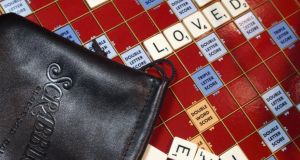 “No. I haven’t played for four or five years.”

We’re backstage at Liberty Hall in Dublin, where McCann is about to be interviewed in front of an audience as part of Dublin Writers Festival. More importantly, we have initiated a game of Scrabble.

“I bet you’re good at Scrabble,” says McCann, who seems intent on distracting me with affable chat. “I only get one go, right? And then you have the same game ongoing with different writers? But you didn’t get Dan Brown. I’m disgusted with you.”

He picks his letters.

“All good ones!” he says triumphantly. “How much time do I have to do this? I have my word. I can play the word ‘rhythm’.” He doesn’t really have the word “rhythm”.

He stares at the board. He plays “hosed” on a double word score (18 points). “Hosed,” he says. “Because that’s what you’re going to do to all these writers!”

“No, you won,” McCann says even more sadly. He’s under the illusion that the first player gets a double word score. He sifts through the rules for about five minutes before finally accepting his victory, mounting the stage of Liberty Hall Theatre and being thoroughly entertaining for an hour and a half. It’s a bad start.

Ronson, to be fair, is trying to resolve an issue with his laptop while he plays. “Tell the readers I’m multitasking,” he says.

I’ve just played “hoop” on a double word score, worth 18 points, so Ronson is trying to get two words at once, using Williams’s crafty two-letter-word tactics.

“It’s not,” I say. I don’t have a dictionary – I really should have brought a dictionary – so Ronson checks on his phone. “It stands for . . . Associated Press,” he says.

“That’s an abbreviation,” I complain.

That also sounds like an abbreviation, so he decides to add a W, to make “paw” on a triple word score, giving him a healthy but insufficient 16 points.

“I’m taking great solace because I heard Ian McEwan was rubbish at this the last time, and he’s won a Booker,” says Paul Lynch, the first-time author of Red Sky in Morning. He’s about to take to the stage at Smock Alley Theatre alongside the second-time novelist Peter Murphy.

“I think it’s unfair that people expect writers to be good at this,” says Lynch. “When you’re choosing words for a book it’s contextual. It’s a totally different process.”

Nonetheless he offers to go first. “I’ll get it out of the way,” he says with a sigh.

They’re not impressed with the tiles Lynch has inherited from Jon Ronson.

“Would you look at the rubbish Ronson left behind him!” says Murphy. “He’s like some student who’s after trashing the flat you’ve moved into.”

“Oh dear, they’re not good letters, are they?” says Lynch. “I used to like Jon Ronson until this moment. This is awful.”

He doesn’t spend too much time thinking about it. He plays “gurn”. “That’s an all right word,” he says.

I stare at the board for a while before putting down “boon”. You will have noticed that I have mixed up the order. I should have gone first, but I don’t tell Lynch until later.

Murphy is a more seasoned Scrabbler. “The trick is not getting too hung up on individual words,” he says. “I used to fall in love with the prospect of getting ‘xylophone’ and would lose 12 games in a row.” Recently, he says, he’s been trying to modulate his playing into a sparser “late Scrabble style”.

After much concentration he plays “bint”. “It’s of Russian extraction,” he says, to raise the tone. “I was trying to get ‘bantam’, but I didn’t have an M.”

I put down “joint” on a double word and a triple letter score and get 28 points. “Jesus, that’s a good word,” says Lynch, before feeling the injustice of the situation. “You gave me a seven-letter selection with three Is in it! I’d like to make an official complaint about the letters Ronson left me.”

“Jon Ronson f***ed it up,” says Aleksandar Hemon. I have explained that Lynch was blaming Ronson for his tile selection. “I have seven vowels,” says Hemon. Then he stares at the board silently for a very long time. I have already played “jag” on a double word score. I gave Hemon the option of going first, but he declined.

“Can I exchange all my letters?” he asks, eventually.

“I might miss a turn anyway,” he says, looking at me with his big sad eyes.

I let him pick another seven. His eyes don’t get any happier.

“I shouldn’t have let you go first,” he says. Eventually, he plays “line”, garnering himself a meagre 10 points with the help of a double word score.

The author, journalist and TV presenter Dawn O’Porter is preparing for a Q&A with my colleague Róisín Ingle in a backstage room at Smock Alley Theatre.

“This is really hard,” she says as she stares at the board. “I feel as if I’ve never heard any words. I usually play as an excuse to sit by a log fire and drink red wine.”

Victory is mine, I think. Then I find myself stumped by what one publishing person calls “a very closed board”.

One of O’Porter’s publishing colleagues attempts to help. “Oi,” says O’Porter. “You’re meant to be on my side.”

She lets Ingle assist me, but my colleague doesn’t seem to understand the rules of Scrabble.

I feel a bit downcast. Finally, I play “ewe”. I shrug it off by joking about how “ewe” rhymes with “grew” and by nonchalantly biting into a consoling chocolate Wagon Wheel, which was part of the backstage food basket. Inside, however, I am devastated.

“Colum McCann went with ‘hosed’?” asks Barry. “He’s been too long in the US.”

“Bint”, they both agree, is a very Peter Murphyish word.

They’re struck by how monosyllabic the board is. Barry, who volunteers to go first, suddenly understands why. The tiles are cursed. “All Us and f***in’ Vs,” he says. “This is a disaster.”

Torn between the game and overseeing the soundcheck for the launch of a short-story anthology he has edited, he settles on adding an S to “joint”.

I make two words, “kin” and “on”. “I didn’t realise you could do two words at once until very late in my Scrabble-playing career,” says Murray. “I haven’t played for a while, because I get extremely competitive and angry.”

He has the air of a man who’s played a lot of Scrabble in seedy late-night Scrabble joints. “I feel hosed,” he says while staring at the board. “Hosed by the bints.”

Just when I think he’s flagging he puts down “next” with the X on a double letter score, also creating, as a tactical byproduct, the word “ones”, for 24 points.

“And you don’t look at all smug about it,” says Barry. Sarcasm, incidentally, is worth only 12 points in Scrabble.