A Magdalene laundry that was neither Irish nor Catholic, and novel it inspired

This is my take on what led to that breakout which closed Glasgow’s notorious asylum for good. I wanted to tell the women’s story, to use dramatic licence to give them a voice 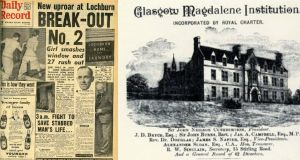 How the Daily Record reported the 1958 escape from Glasgow’s Magdalene Institution for the Repression of Vice and Rehabilitation of Penitent Females (also known as Lochburn House). It had very specific criteria for women who entered – they had to be free from venereal disease, newly “fallen”, not pregnant – which set it apart from its Irish counterparts – and willing to submit to discipline. Others were committed to the notorious Lock Hospital 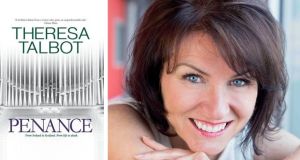 Theresa Talbot: My parents were both Irish, so I was always aware of the Magdalenes on some level. I was shocked, however, to discover that the Glasgow Institution, like so many in Britain, were not run by the Catholic Church, but by parish councils and local authorities

In 1958 Glasgow’s Magdalene Institution was closed down after the inmates staged a “riot” amid claims of abuse and ill treatment. The riot was no more than a breakout where the girls in a desperate bid for freedom climbed a ladder and scaled a wall.

The Magdalene laundries are synonymous with Ireland, but they were actually widespread throughout Britain too . This story was part of Glasgow’s forgotten past and one I was researching as a possible radio feature.

The girls were all aged between 15 and 19 years of age and none had been convicted of a criminal offence. Despite this police all over the city were hunting for them and newspaper reports called on the public to be vigilant and look out for the girls, distinctive in their blue dresses and white aprons. Each time the girls were rounded up they staged another breakout, some escaping down the fire escape; others staged a rooftop protest. They vowed to keep escaping until their voices were heard. The “riot” lasted for three days. The final breakout occurred during a visit by offcials from the Scottish home department who were investigating the series of events. There was an official inquiry into their claims of beatings, bullying and verbal abuse; to this day no one has been held accountable. To me that’s the biggest crime of all.

I found some newspaper articles in the archives and thought “what happened”. After all, the institute had existed in Glasgow in one form or another since 1812. Something must have brought things to a point whereby they just said “no more – enough is enough”. And the picture of the girls haunted me. I wanted to know what made them stage such a radical protest, but more than that I wanted to know what happened to them afterwards? They were just kids with their whole lives ahead of them, so where did they go? Did they have family to care for them? Or more likely were they left to fend for themselves?

I started jotting down ideas and before long the radio feature (which I was told wouldn’t really be of any interest!) was forgotten and I realised I had a bigger story to tell. I suppose the premise for Penance really is art imitating life – the main protagonist, Oonagh O’Neill, is a Glasgow-based journalist researching the city’s Magdalene Institution when she comes across the same archived picture and thinks…”there’s a story here”. Her research uncovers more than the incarceration of innocent females and leads her on her own journey.

This is my take on what led to that breakout which closed the doors of the city’s notorious asylum for good. I wanted to tell their story. I wanted to use dramatic licence to give the women a voice. And often fiction can be a more powerful tool in relaying a story of this magnitude.

I never intended to frame Penance around a crime novel, it just seemed to happen that way. To me the worst crimes of all are the ones which are carried out in the full view of the public – sanctioned by the establishment. Look at Jimmy Saville, look at paedophiles in position of authority, look at domestic abuse. Many perpetrators will never be brought to justice and their crimes are so pernicious then seep into our psyche and become the social norm almost unawares.

I was born and brought up in Glasgow but my parents were both Irish. Dad was from Dublin and Mum from Dún Laoghaire, so I was always aware of the Magdalenes on some level. I was shocked, however, to discover that the Glasgow Institution, like so many in Britain, were not run by the Catholic Church, but by parish councils and local authority councils.

The narrative for my story demanded that the asylum be Catholic-run with links to Galway, so Lockbridge House in Penance is actually an amalgamation of Glasgow’s Magdalene home, also known as Lochburn House, and the city’s notorious Lock Hospital.

Glasgow’s Magdalene Institution for the Repression of Vice and Rehabilitation of Penitent Females (to give it its official name) was non-denominational and was funded by voluntary subscriptions – as well as the income generated from being a working laundry.

It was originally set up in response to the city’s growing concern about prostitution, sexually transmitted disease and the moral health of society as a whole. Obviously it was considered prudent at the time to incarcerate the women in a voluntary institution – and at the time the term prostitute included sex-workers, single mothers, socialists and girls who dressed “immorally”.

Victorian Glasgow had a dual system in operation to deal with the spread of this social problem. The Magdalene Laundry had very specific criteria for women who entered – they had to be free from venereal disease, newly “fallen”, not pregnant – which set it apart from its Irish counterparts – and willing to submit to discipline.

The others were committed to the notorious Lock Hospital, which was established in 1805 to house “dangerous” females with sexually transmitted diseases. Glasgow policed its own version of the Contagious Diseases Act. The Glasgow System, as it became known, saw unprecedented collusion between the local constabulary and the medical authorities. Women under suspicion could be forced to undergo an intimate examination by male police officers; if they showed signs of VD they would be incarcerated in the Lock Hospital without limit of time. Many were never released.

The most horrific aspect of this was that the Glasgow system was deemed to successful is was adopted by several cities across Britain. The Lock Hospital didn’t close its doors until 1950. There’s an actual transcript from a doctor claiming a seven-year-old girl receiving treatment for syphilis gave herself the disease!

The records for the Lock Hospital are fairly scant too. Again it’s as though the city would prefer to deny any knowledge of its existence. I researched the stories of many women for the book, not just those from the Magdalene, but archived interviews from other asylums, poorhouses and prisons.

I set Penance in the year 2000 with flashbacks to 1958. I wanted to tell the story with a modern outlook and with the benefit of hindsight. Also, it allowed me to show how easily victims are forgotten.

The more research I did the more horror I unfolded. I’d often heard the Magdalene Laundries described as Ireland’s Shame. Well, I have to say the rest of the world needs to get off the moral high-ground and look at the way working-class women were treated by society in general. And it was primarily a working-class problem. One report into Glasgow’s Magdalene Asylum states “few of the applicants belong to the better educated and better provided for classes….it is gratifying to find that comparatively few who have enjoyed the advantages of a Christian home fall into this sin”.

These women were not afforded the luxury of a fair and just society. They committed no crime. They were never convicted of any wrongdoing. So in essence they had no right to appeal. Penance tells the story of thousands of women who lived and died in shame because there was no one to speak up for them. I’m acutely aware that there are many women still alive who endured the horrors of not only the Magdalenes, but also asylums, so it was important that I tried to be sensitive and not make their pain salacious. We may not know their names, we may never see their faces but if we spare a thought for them each day they’ll never be forgotten.

Theresa Talbot is a BBC broadcaster and freelance producer. Penance, her second book, is published by Strident Publishing