A literary festival in a shopping centre 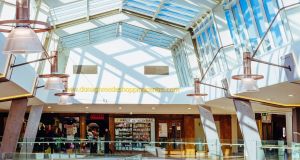 A new festival of writing aims to celebrate a love of reading and books by bringing its events to that most egalitarian of venues, a suburban shopping centre on the north side of Dublin.

Donaghmede Literary Festival emerged following a campaign to save the local library, based in Donaghmede Shopping Centre, 20 minutes from the heart of the capital.

Last year, Dublin City Council was considering relocating the library, in the shopping centre for over 30 years, to a venue outside the area. Supporters got together, including the local residents’ association, local Labour party Senator Aodhán Ó Riordáin and writer Sheila O’Flanagan to fight to save the community facility. During the campaign, it became obvious how popular the library was and how much interest there was in reading and books.

“Writing festivals are often held in leafy suburbs or in castles and not generally in places like Donaghmede,” O’Flanagan says.

She can’t think of a literary festival that’s been run in Dublin north of the Royal Canal. They are mostly in affluent areas, she says.

“We wanted to celebrate that love of reading and books in the area and we thought, ‘why not here?’ We wanted to focus on the democratisation of reading and reading for pleasure, which is often not reflected in a lot of literary conversation.”

The suburb is a mix of private and social housing and its shopping centre, developed over 45 years ago, has been refurbished but is typical of its time – functional with an anchor tenant, chain stores and local businesses. Its popular library, where many of the events are taking place, is on the first floor. Open spaces around the centre are also being utilised, including for Savage Words with Roddy Doyle, which is already booked out. There is no charge for any of the events, though tickets must be reserved via the website. There are workshops for children and adults, readings, discussions and guided walks.

“There was a big conversation we had about not charging . . . In the end we thought some people in Donaghmede wouldn’t be able to afford to pay . . . so we said if we were going to do it we would do it for free,” says O’Flanagan.

The manager at the shopping centre, Pat McCabe, was enthusiastic and agreed to sponsor the festival. There was, therefore, no payment needed for the venue. The local community got fully behind it, the librarians were quickly involved, as was the shopping centre’s bookshop, The Haven. And most writers, too, were fantastic about coming on board, O’Flanagan says.

“Roddy Doyle said yes straight away . . . it’s great to have someone of his calibre,” she says. “His books are very recognisable and he crosses the divide between literary and popular fiction.”

Ó Riordáin, whom O’Flanagan credits with spearheading the festival, says the save-the-library campaign has grown into “a wonderful positive expression of community life”.

“The buzz in the area is wonderful,” he says. “It’s important for every community to protect their resources but also to build on them and send the message out to the world about all the great things that they are achieving together.”

O’Flanagan is moderating at a Saturday evening event about the growth of female voices in literature. But her anxiety is reserved for the success of the overall festival and the weeks running up to it have been about logistics and checking that “all boxes are ticked”. They are hoping to “showcase the community at its best”.

“This is our first . . . we know we’ll find out there are things we could have done better,” she says.

“”But we’re hoping it will all work out, and everyone will have a good time.”

As for Donaghmede library, the campaign to ensure it remains in the shopping centre has been successful, so far at least.
Donaghmedelitfest runs from September 26th to 28th. For information on events and for tickets see Donaghmedelitfest.com