A Life in Questions review: the disappointingly private Jeremy Paxman

It feels as if the publisher, rather than BBC Newsnight’s great interrogator, wanted to produce this book 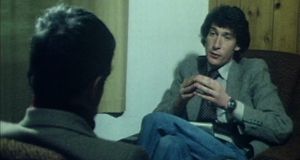 Jeremy Paxman reporting for Spotlight on BBC Northern Ireland, in 1979.

Book Title:
A Life in Questions

A third of the way into his memoir, Jeremy Paxman wonders why anyone bothers to write a book, endorsing the view that while every journalist may believe they have a book in them, that’s probably where it should stay.

It is not advice he has heeded: this is his eleventh effort. He talks about the compulsion to write, but is apparently unconvinced, since he returns to the question a hundred pages on, this time concluding: “If you have an itch, it helps to scratch it.”

The trouble is that it feels as though the publisher rather than Paxman himself had the itch to produce this book. You can imagine him somewhat reluctantly agreeing, sighing and then imposing the condition, spelt out in the foreword, that leaves the most gaping hole: “I have taken the decision not to write about my family.”

So we do not meet the woman who has shared his life for three decades or learn that they have three children.

Paxman wastes no time, however, in introducing his seaman father and his appalling temper: “I was thrashed with sticks, shoes, cricket stumps, cricket bats or the flat of his hand,” he writes on page 6. “Did I love my father? My feelings ranged from resentment to passionate hatred.”

This baggage, along with a brief reference to depression and therapy, is checked in at the start of a whistle-stop tour that takes him from Yorkshire to the nation’s living rooms.

Invited along for some of the ride, we set out from a John Major-ish cricket-on-the-green world of sit-up-and-beg bikes, maiden aunts, men in tweed jackets, Barry Bucknell and the Goons. “I cannot help that it all sounds such a clichéd picture of a vanished England,” he writes. Sadly, it does sound cliched. HE Bates and Laurie Lee have been there, done it better.

Journalism first gets a look in when Paxman goes up to Cambridge and takes the editorship of the Varsity student newspaper. (University Challenge contestants will be aghast to learn that he needed A-level resits to get in, having managed only a B, C and E in his first attempt.)

He writes that life at St Catharine’s College was everything he dared to hope it would be: “a beautiful bountiful feast”. Yet he spares it only a dozen pages, reinforcing the perception that the personal is being kept to the minimum – an uncomfortable attitude in an autobiography.

After graduating (with a 2:1 in English) Paxman is at first rejected and then offered a job at the BBC, writing radio bulletins. A spell with Radio Bristol follows before he pitches up in Belfast in 1974, at the height of the Troubles.

Here, at last, the book comes to life. Here, at last, the vagueness and generalisations are swept away to offer some insight into the unique experience of being Jeremy Paxman – reporter and then, for 25 years, host of Newsnight – rather than being just one of the many 1950s children who was beaten at home (weren’t we all?) or almost any public schoolboy.

It is as though the professional arena liberates Paxman as he relates the background to the conflict in Northern Ireland, scary encounters with Gerry Adams, the H-block dirty protests and hunger strikes, the rise of rival republican and “loyalist” paramilitaries and the dilemmas in trying to report the news without giving terrorists “the oxygen of publicity”.

And once he has broken free from the straitjacket that constrained the personal he’s off, describing and commenting on wars in Nicaragua, Lebanon and El Salvador (where a soldier standing next to him was shot in the chest); the problems of the cosy relationship between politicians and journalists in the Westminster bubble (“the reporter is there to speak for the governed, and a journalist who has spent all their working life in the company of politicians loses that perspective”); and, most of all, the inner workings of the BBC, his employer for more than half his life.

The diffidence remains, however, with mistakes and regrets given precedence over triumphs: falling for an IRA stunt, forgetting to ask John Prescott the question that would produce a scoop, failing to stop Matthew Parris “outing” Peter Mandelson on Newsnight as gay, asking Charles Kennedy “one question too many” about his drinking, rueing the “unkind” question to Gordon Brown: “Why don’t people like you?”

Then there is the notorious interview with Michael Howard and that repeated question about whether Howard, as home secretary, had threatened to overrule the head of the prison service – to which hindsight offers both torturer and victim answers that might have broken the impasse – and the hapless young Home Office minister Chloe Smith, who was cruelly asked, “. . . You ever think you’re incompetent?”

He admires Tony Blair and Bill Clinton’s mastery of detail, Kenneth Clarke’s frankness, and Boris Johnson’s “nimble and sinewy brain”. Johnson wins the prize for “most enjoyable to interview”. There is admiration, too, for Frank Bough – “one of the most accomplished broadcasters of his generation”. Paxman says it’s a shame that Bough is forever remembered for his liking for cocaine – and then proceeds to spend three pages retelling that story.

For comic relief, lunches with Stuart Rose of Marks & Spencer, in the aftermath of pantsgate, and Silvio Berlusconi, in his “bunga bunga room”, are gems, deftly sketched in a page or two. As is the teddy-bear- and-lollipops encounter with Mohamed al-Fayed.

Newsnight’s shame over Jimmy Savile is a different kettle of fish, mulled over in detail by a man clearly troubled by his subject. Paxman was obviously falling out of love with Newsnight, but he felt compelled by loyalty to stay on for a while after the controversy over the spiking of its Savile investigation and subsequent ill-informed smearing of Lord McAlpine, the late Conservative Party treasurer.

The defence of Meirion Jones, the producer who had pledged in 2011 to “nail” Savile, is laudable, but it still begs a question: if Jones had, as he said, been aware in the 1970s of what the disc jockey was up to, why did he wait more than 30 years, until Savile was dead, to do anything about it?

We know that Paxman is opinionated – he has been far more critical of the BBC elsewhere than he is here – and it is apparent, if only from the many projects he is offered, that others hold him in high esteem. Yet he is still not confident that he has the right to hold forth. The most revealing sentence in the book is not the headline-grabbing one about hating his father but: “I have suffered all my working life from impostor syndrome, unable to quiet the nagging voice inside asking ‘and what, precisely, do you bring to the party?’ ”

It’s that doubt that spurs many successful people, that keeps them grounded and marks out the talented from the egotists. But there is another nagging voice that comes through this desultory account of his life: “Why am I bothering with this?”

And so we reach our destination.Paxo has been an engaging travelling companion but a reluctant confidant: essentially that bloke off the telly but with less pomposity and a greater sense of the absurd (his favourite adjective).

Apart from the superficial glimpse of his childhood, we know him no better than we did when we set out.

We take our leave in the arrivals lounge, with Paxman pondering where to go next. As he reclaims the baggage from the carousel it seems lighter than it was: the violent father is forgiven, if not understood.

But there is a new burden in the recognition that his (our) baby-boomer generation has been the most fortunate in history – yet still demands more.

Then there is the hand luggage he has carried all the way: that bag of diffidence.

“I have taken my very modest talent quite a long way,” he writes.

Well, that’s half-right. Liz Gerard is a media commentator and former deputy night editor of the Times. She blogs about journalism at sub-scribe.co.uk