A Hidden Landscape Once a Week review: Between the lines of UK rock journalism 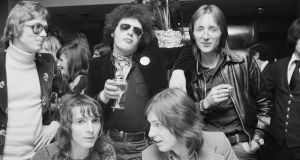 At an after-show party in London, 1974, are (back) Chris Charlesworth of Melody Maker, Charles Shaar Murray and Nick Logan of the NME; and (front) Rob Mackie of Sounds and Chris Briggs of Chrysalis records. Photograph: Erica Echenberg/Redferns

Book Title:
A Hidden Landscape Once A Week: The unruly curiosity of the UK music press in the 1960s-80s, in the words of those who were there

In 2015 editor and writer Mark Sinker organised a conference at Birkbeck University on the history of the UK music press from the 1960s to the 1980s. The title of the conference, Underground/Overground, alluded to what was special about this particular epoch of music journalism. During this period, ideas associated with independent countercultural publishing found a home in commercially successful weekly magazines. It was as if the underground almost succeeded in going overground without compromising on its more radical convictions.

Following on from the conference, this anthology comprises conversations, memories and essays by some of the most significant music journalists and editors from the period, examining how the music press managed to harness an ambitious critical culture on a wide-reaching, mass-market scale. At its best, the music press functioned as a gateway drug to a whole new cultural world. Readers initially pulled in for record reviews of their favourite bands might find themselves chasing up references to French philosophy, European modernism or radical politics. As Charles Shaar Murray recalls, the New Musical Express (NME) was guided by the idea that writing about the music was less important than writing “about what the music was about”.

Murray was hired in 1972 at a moment when the NME was threatened with imminent closure due to dwindling sales. The paper had failed to comprehend the transformations of rock and Murray and a whole set of journalists who had been writing for the underground press were brought into the redress this. As Murray says, “part of the brief – which we inherited from the underground press – was to broaden the palate of cultural influence, and turn people on to stuff they might not otherwise encounter”.

Paul Morley similarly saw the music press as a crucial platform for unexpected cultural encounters. He recounts how “The NME was an extraordinary tunnel you could crawl through every Thursday morning. A new set of possibilities opened up then. It was psychedelic almost.”

The vocabulary of psychedelia recurs in this volume. Its musical role in the late 1960s acted as one of the major catalysts for new kinds of music journalism. Psychedelic music demanded a new language. When the Beatles started bringing out albums such as Revolver and Sgt Pepper’s it made apparent the lag between rock music’s increasing conception of itself as “art” and music journalism’s comparatively conservative and outdated writing style. By the time of punk and post-punk, a weekly music press that had taken on board lessons from more experimental underground journalism was much better equipped to make sense of another set of countercultural changes.

But even if psychedelia no longer seemed relevant as a musical style amid the gloom of the late 1970s, its aura persisted in a conception of music as a transformative vehicle for mind-expanding ideas. Whether the imaginary is that of hippies kissing the sky or post-punk goths gazing into the abyss, in both contexts the writer is faced with ambitious forms of music that seem to reach for the ineffable and must then attempt to translate them into the constraints of the written word.

These might sound like anguished and overly philosophical concerns for popular music journalism but many writers used ideas from philosophy to write about music in ways that were fun, playful and irreverent. French theory was used not for the sake of dry, abstract intellectualising but as part of adventurous writing styles that sought to convey the same unruly energies as the music. It was as if the music journalist or critic was trying to contribute to the kinds of world-building normally reserved for the musicians themselves.

This contradictory position of the music journalist – split between being a critic and a participant – is best summed by Morley in a 1980 NME article on the band Cabaret Voltaire. Taking the train from London to Sheffield to meet the group, he states his mission at the beginning of the article: “I am on a journey to demystify and mythologize.” This captures something of the contradictory spirit of this tradition of music journalism: seeking to demystify the conditions of music production in late capitalism but not at the expense of spoiling the mystery of the music, even intensifying the mythology around it for the reader/listener.

Elsewhere in this volume, the renowned postcolonial theorist and former music journalist Paul Gilroy expresses his understandable weariness with this familiar narrative of the UK music press, which he refers to as the “bromantic ethnography of the NME office”. Gilroy writes about his time as an aspiring journalist in the 1970s when he was excluded from the music press by “self-appointed white custodians”, an experience undoubtedly shared by many young black intellectuals in Britain. Throughout the 1960s, for example, there were no black writers with any prominent role in the music press, though Gilroy and Sinker note separately that some young white journalists, particularly Val Wilmer and Richard Williams, made notable efforts to make sure black originators were not entirely edged out.

Sinker actually frames this two-decade history of the music press in directly postcolonial terms in his excellent introductory essay to the volume. He sees it as a “tale of counter-colonial curiosity after the end of empire”. This allows the space for recognising the subversive aspects of this tradition of music journalism, pursuing countercultural provocations at the heart of commercial publishing, while at the same critically interrogating its complicity in the racist power structures of what Paul Gilroy refers to as “this deluded, postcolonial country”. In this regard Sinker sets out the right questions for this volume, and beyond. Questions such as “Who gets to speak?” and “Did we really eradicate the impulse to empire in ourselves?”

The presence of these sorts of difficult questions also makes for smarter music writing. In the past I’ve read Sinker cover everything from experimental noise music to the Spice Girls, and he always meets his subjects with a critical generosity and a desire to interrogate but also revel in contradictions. Similarly with this volume, he celebrates the noise of disagreement and critical tension. His editing and framing of the volume turn it into something more interesting than a simple celebration of some kind of “golden age of music journalism”, because, as he puts it “resurgent gleeful cacophony is much more the reality than nostalgia: a polyglot discourse rude and smart.”