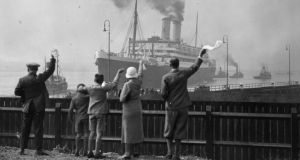 Danger ahead: the SS Orontes, the Orient liner on which Rachel Rhys has set A Dangerous Crossing, leaves London for Australia in the 1930s. Photograph: Davis/Getty

If you’re going to run away from your old life you might as well run to the other side of the world. Rachel Rhys’s new novel, A Dangerous Crossing, tells the stories of a group of people who have decided, or been forced, to do just that in the summer of 1939.

There’s the charming Edward Fletcher, recovering from a stay in a sanitorium, and his protective sister Helena; the glamorous Max and Eliza Campbell, a frivolous and privileged couple whose glamorous facade hides dark secrets; Maria, a Jewish Austrian refugee who fears she will never see her family again; and Lily, a young working-class girl determined to start afresh in less gloomy climes. In ordinary life the paths of these people would probably never have crossed. But the usual social rules don’t apply on an ocean liner, the Orient liner SS Orontes, on which the characters are making their way from England to Australia.

Twenty-five year-old Lily is taking advantage of a (real) scheme run by the Church of England, which paid for young – and white – British women to travel to Australia in order to work in domestic service for at least two years. Lily views it as a chance to see the world – and to escape a tragedy in her own past, the details of which gradually become clear as the novel progresses.

Rachel Rhys is the alter ego of Tammy Cohen, a successful thriller writer who has adopted a pseudonym for her first foray into historical fiction, and she knows just how much detail to dole out, slowly revealing the characters’ motivations and secret passions.

We see life on the Orontes through Lily’s eyes as “a floating world, apart from all other worlds”, and the atmosphere of the voyage is so vividly evoked that you may initially feel seasick and, then, sunkissed, along with the passengers.

You may also share Lily’s creeping unease. At the start of the journey everything feels like an adventure, but “the longer the journey continues, the more confined it is starting to feel, deck upon deck, passenger upon passenger, all of them churning around each other without anywhere to go”.

As the ship slowly starts to feel more claustrophobic Lily starts to wonder how well she really knows her new friends. Are any of them really being themselves on board? After all, as Eliza says, “You can do what you want on a boat, behave as badly as you like, and when you get to wherever you’re going, it’s as if it never happened.”

But the real world still manages to creep into this dreamlike place, thanks to visits to various ports and the regular reports of the geopolitical events that you know will soon lead to war. The many German and Austrian Jewish refugees on the ship are viewed by pretty much everyone with the casual anti-Semitism that was so common in 1930s Britain and that is often ignored in nostalgic depictions of the era.

But other aspects of the novel are less convincing. George is an authentic fascist, but making him a physically repulsive sexual predator too risks pushing him towards caricature. When Lily’s new friend Maria gently suggests that perhaps Edward is reluctant to get romantically involved with her because of the difference in their backgrounds Lily is shocked; she chastises herself for being naive, but it seems extremely unlikely that an intelligent working-class girl would not already have been well aware of this possibility.

And throughout the book the dialogue can be a little stilted. (Strangely, that of the brittle, affected Eliza is generally the most convincing.)

Yet Rhys creates such a powerful sense of foreboding that you may well gulp down the entire book in a single day. A Dangerous Crossing begins with the arrest of an unnamed woman for an unnamed crime during the Orontes’s arrival in Sydney before flashing back to the start of the voyage, and throughout the novel there’s a sense that something sinister could happen at any time. This isn’t a perfect novel, but it’s a totally gripping one. Just don’t take it on a cruise.

Anna Carey’s latest novel, The Making of Mollie, was shortlisted for an Irish Book Award in 2016