Charlie Parker and DC Max Wolfe back on the beat, and family screts loom large in popular fiction 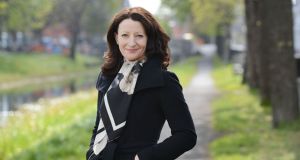 Kathleen MacMahon releases her second novel, The Long Hot Summer, in May 2015

The Girl on the Train (Doubleday, January), by Paula Hawkins, is a psychological thriller centred on the daily commute; the story is already on its way to Hollywood. Second Life (Doubleday, February), by SJ Watson, is the story of a devoted mother and wife who becomes obsessed with a stranger.

James Naughtie’s The Paris Spring (Head of Zeus, March) follows its hero, Will Flemyng, back to his spying days in 1960s Paris. Peter Swanson’s The Kind Worth Killing (Faber, February) is a tightly plotted novel of betrayal set in London and Boston.

The Slaughter Man (Cornerstone, May), by Tony Parsons, sees DC Max Wolfe on the hunt for a dying serial killer. The Stranger (Orion, March) is the latest from the US bestseller Harlan Coben.
In Irish crime fiction, there are gunrunners on the Border and riots in Belfast in Adrian McKinty’s Gun Street Girl (Serpent’s Tail, January), the fourth in his Sean Duffy series.
Nazi atrocities, drowned bodies and American billionaires find their way to rural Ireland in The Lost and the Blind (Severn House, January), by the Irish Times crime critic Declan Burke.
Jarlath Gregory’s The Organised Criminal (Liberties, April) is an Irish noir novel set in bandit country. The second book by Karen Perry, Only We Know (Penguin, May), is a psychological thriller that looks at a child’s death in Kenya.
The RTÉ journalist Sinéad Crowley follows her debut with Are You Watching Me? (Quercus, July), which picks up with Sgt Claire Boyle six months after she has given birth.
New books from more established names include John Connolly’s A Song of Shadows (Hodder and Stoughton, April), with Charlie Parker risking his life to defend a woman he barely knows, and Stuart Neville’s Those We Left Behind (Harvill Secker, June), the story of a cover-up murder that sent a 12-year-old boy to prison.

Mothers, that perennial source of literary inspiration, feature prominently in Irish commercial fiction next year. In Anna McPartlin’s  Somewhere Inside of Happy (Transworld Ireland, May) a middle-aged mother looks back 20 years to the day her son died, while Sheila O’Flanagan’s  My Mother’s Secret (Headline, July) centres on a shock revelation at a 40th-anniversary party.
Casting off the role of mother and wife, Iseult McAllister unearths family secrets in  The Long Hot Summer (Little, Brown, May), the second novel by Kathleen MacMahon. More shocks are in store for the Conway family in Emma Hannigan’s ninth novel,  The Secrets We Share (Hachette Ireland, March), although arguably not as many as the final instalment of Laurence Donaghy’s  Completely Folk’d (Blackstaff, March).
Patricia Scanlan’s  A Time for Friends (Simon and Schuster, February) tests the bonds of friendship when the going gets tough. Rosemary McLoughlin’s sequel  Return to Tyringham Park (Poolbeg, April) follows twins separated at birth in Australia and Ireland.  Still You (Poolbeg, June), by the Derry journalist Claire Allan, explores the difficulties of being a carer.
Another Northern Irish author, Jason Johnson, brings us the musings of an unarmed hitman in  Aloysius Tempo (Liberties, June), while those looking for romance north of the Border will find it in the wartime novel  The Golden Sisters (Blackstaff, March), by Arlene Hughes.
Farther afield,  The Mime Order (Bloomsbury, January) is Samantha Shannon’s sequel to her penal-colony bestseller, The Bone Season. Jeffrey Archer’s fifth Harry Clifton novel,  Mightier than the Sword (Macmillan, May), opens with an IRA bomb exploding on yhr MV Buckingham.
The Long Utopia (Harper Luxe, June), by Terry Pratchett and Stephen Baxter, is the fourth novel in the Long Earth science-fiction series. Fans of historical fiction should keep an eye out for Dennis Lehane’s second World War novel  World Gone By (William Morrow, March) and Ian Ross’s  The War at the Edge of the World (Head of Zeus, January), the first book in a series set at the end of the Roman Empire.

A Choice of Emily Dickinson’s Verse