10 facts you didn’t know about sport in London 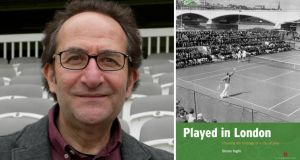 1. London has the oldest bicycle shop in the world, Pearsons of Sutton, established as a blacksmiths in 1860, and the second oldest cycle track in the world, Herne Hill, opened in 1891.

2. London’s oldest surviving sports-related structure can be visited only by cabinet ministers and government officials. Dating from c.1534, it is the northern wall of a tennis court built at Whitehall Palace by Henry VIII, now forming part of the Cabinet Office, backing on to Downing Street. It is said that Anne Boleyn was watching a game of tennis on this court when she was arrested on Henry’s orders in 1536, and that, having placed a bet on the outcome of the match, she begged to be allowed to see who won. Whitehall Palace was, at the time, the largest sporting complex in Europe, with four tennis courts, a cockpit, a tiltyard for jousting and a bowling alley.

3. Pall Mall takes its name from the French game known as paille maille (literally ball and mallet), a favourite of James 1. The road was originally a pall mall alley, measuring 850 yards long, covered in crushed seashells.

4. The highest concentration of public and private swimming baths ever recorded in Britain was in Islington. Between 1743 and 1939 no fewer than 14 baths operated. The longest-lasting was the open-air Peerless Pool (1743-1868), commemorated today by both Peerless Street and Bath Street. A hundred yards from the site stands Ironmonger Row Baths, the last baths in London to have a public laundry.

5. There are two games thought to be played in London, and nowhere else! One is a form of Old English skittles, once popular in pubs across the southeast, but now confined to a single alley at the Freemasons’ Arms in Downshire Hill, Hampstead. Try it for yourself on Tuesday evenings from 8-11pm. The other is rugby netball. This was dreamt up by soldiers in 1907 and has been played on Clapham Common ever since. Games take place also on Tuesday evenings, but only during the summer.

6. London’s oldest sports building still in use for its original purpose is the Real Tennis Court at Hampton Court Palace. (Real tennis is a name adopted to distinguish the ancient game of tennis from its Victorian offshoot, lawn tennis). One of its walls dates back to 1625. Today the court is listed Grade I, the highest level of protection accorded by government.

7. In the 1930s Herbert Morrison, leader of the London County Council, promised that London would become a city of lidos. In total, 75 lidos and outdoor swimming pools operated in the capital during the 20th century. Today only 15 lidos, pools, ponds and reservoirs remain where the public can swim outdoors. The oldest is the Serpentine in Hyde Park, where swimming races were first organised in 1837.

8. Between 1927-39 London boasted no fewer than 27 greyhound tracks. At their peak in the 1930s and late 1940s, race nights at the likes of White City, Wembley, Wimbledon and West Ham drew crowds rivalling those of the major football clubs, offering facilities of a standard then unseen at most other sports venues. Not least they encouraged women to attend! Today only three tracks survive, at Wimbledon (opened in 1928 but now in the balance), Romford (1931) and Crayford (1986).

9. Had it not been for the intervention of Queen Victoria’s husband, Albert, the Oval cricket ground in Kennington might well have disappeared only six years after it opened. Albert intervened to stop housing being built on the site in 1851 because he had recently become a fan of the game.

10. Until the publication of Played in London, sports historians have long believed that the first floodlit sports event in Britain, and therefore the world, was a football match at Bramall Lane in Sheffield in October 1878. However, research conducted by author Simon Inglis has now revealed that an earlier floodlit match took place in west London, and that instead of football, it was actually a polo match, between the Ranelagh Club and their neighbours at Hurlingham, played on the evening of July 18th, 1878.

Played In London: Charting The Heritage Of A City At Play by Simon Inglis (English Heritage £25) has been shortlisted for the William Hill Sports Book of the Year 2014