Bob Quinn: ‘Ireland is part of the evil empire’

The veteran Irish film-maker is as angry as ever. Ireland is complicit in US violence, politics is corrupt, and he’s so frustrated by the silence on climate change that he has written a new work of fiction on the subject

Film-maker, writer and Aosdána member Bob Quinn has written and self-published a novel about climate change. Here he shows us some of the side projects he works on in his garden. Video: Joe O'Shaughnessy 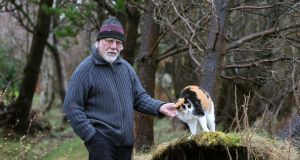 Bob Quinn: “I realised that climate change, rather than war, is the main driver of migration.” Photograph: Joe O’Shaughnessy

If a whoop was heard in south Connemara when Donald Trump was elected US president it might have been coming from a film-maker’s hide in Béal an Daingin. “I was delighted,” Bob Quinn says, not about the result itself but about having forecast it.

A week before the election, last November, he had recalled, on Twitter, a line from To Certain Friends, a poem from 1966 by the Canadian writer FR Scott: “While they are busy arguing about the obvious, / A half-witted demagogue will walk away with their children.”

“It’s down to evolution, and ‘nature, red in tooth and claw’,” he says of Trump’s ascendancy, quoting Tennyson.

Trump got what he craved – attention – and the US got its mirror image in return.

The US was founded on genocide and slavery, is run on principles of crude capitalism and neo-Darwinism, is the engine of the so-called free market and globalisation, is responsible for the recent 15 years of oil wars in the Middle East, has demonised two billion Muslims, and competed with China to be the greatest producer of greenhouse gases.

“It’s a violent country . . . but we’re complicit,” Quinn continues, barely drawing a breath. “Shannon Airport, facilitating US multinationals with low tax rates – for years we have been part of the evil empire, and Enda Kenny should bring something more than shamrock to the White House.”

Coffee can get cold, even ice over, on a midmorning’s exploration of the universe with Quinn. While still on the first cup, looking out over the Atlantic in the Builín Blasta cafe, in An Spideál, he has circumnavigated the globe thrice and spanned time from prehistory to the present.

His interests extend from politics to sociology to anthropology and sport. He has no television, reads several books a week, loves the French author and film-maker Michel Houellebecq – because “he doesn’ t give a damn” – and believes that the late US writer Kurt Vonnegut should have got a Nobel Prize.

Animated while talking about rugby, or life back in Carthage with the Phoenicians, Quinn exudes a weariness about contemporary events and a fury about what’s to come.

The 81-year-old father of six and grandfather of 10, whose body of work in film, photography and writing spans four decades and more, has lost none of the fire that drove him to leave a safe job at RTÉ back in 1969.

Montrose’s loss was then the west of Ireland’s gain. Quinn was determined to shatter the romantic representations of Paul Henry and John Huston through more than 100 works of film, documentary and experimental work for his company, Cinegael.

Quinn still gets requests for copies of his Atlantean quartet of films and accompanying book, questioning Ireland’s so-called “Celtic” origins, from early 1980s. Two of his films are in the collection of the Museum of Modern Art in New York, he is a longtime member of Aosdána, and he received a lifetime award from the Irish Film Institute; he gave his extensive archive to NUI Galway in 2010.

I didn’t become a television producer until I was 27, after a plethora of different jobs and a stint as a trainee in RTÉ , but I was lucky in that they knew I’d produce something fairly professional,”

He learned Irish, campaigned for Gaeltacht civil rights and was part of a movement that led to the establishment by Michael D Higgins, as minister for arts, of what is now TG4.

His criticisms of the commercialisation of the national broadcaster – articulated in the book Sit Down and Be Counted, which he wrote with Lelia Doolan and Jack Dowling in 1969 – may have fallen on deaf ears, but he was appointed to the RTÉ Authority in June 1995.

In November 1996, a day after he had been critical of RTÉ on the Tonight with Vincent Browne programme, on Radio 1, he was dropped from a panel set up to interview candidates for the director generalship of the organisation. He wrote of his experiences on the authority in Maverick, published in 2001.

His anger and frustration now are not about the future of the media – he reads this newspaper daily, although many aspects of it annoy or depress him – but about the state of the planet, and he is struck by the virtual silence on the topic in contemporary Irish literature.

“Cli-fi, or climate-change fiction, is a recognised literary genre,” he says. Its writers include Michael Crichton, with State of Fear; Cormac McCarthy, with The Road; and even Dr Seuss, with The Lorax. Quinn regards the Canadian writer Margaret Atwood as one of the finest. He says

Maybe writers here feel readers want an escape from the reality of it all,”

So Quinn has dipped his toe in the rising waters. He has written and self-published a story about a former advertising man and spin doctor named Flannery, who has a boat. Aristophanes’ Apple, which Quinn describes as a story of “peril, philosophy and love”, is based in a not-too-distant future when ice caps are vanishing, coastal cities are drowning and the tipping point has been passed.

He took its title from Aristophanes’s theory that people used to be spherical creatures, with two bodies attached back to back, and Zeus cut them in half for spite, leaving their navels as a constant reminder that they were once joined as one.

He says that the dystopian tale, located on an emerald isle that is now one large lake and 365 islands, had started as a factual film after a harrowing experience on the River Shannon five years ago.

“I was on the boat I own with Donncha Ó hÉallaithe during December, and I was going upstream at full throttle,” he says. “After a while I realised I was looking at the same trees, and the boat was making no headway. Over several winters I took out the camera and photographed the flooding on and around the Shannon system.”

Bob Quinn is no Seanín-come-lately in his passion for the environment. He began planting back in 1982 in Carraroe. His second wife, Miriam Allen, found six acres of bog, big enough for 1,000 trees, of which about 500 survived.

“I got the grandkids out about 10 years ago to do a survey, and we counted 31 species in total,” he says. “Willow, beech, birch, elder, Monterey pines 40ft high. I found saplings in Seanadh Phéistín, and I was stopped one day by two gardaí who were looking for stolen Christmas trees. Laughing, he says

A young copper whispered to the older garda, as he must have recognised me, so they let me go. It was the only time I was ever stopped for anything,”

“Then I read about the Taoiseach favouring an increase in our national cattle herd from six million to nine million, and the Environmental Protection Agency report intimating that we could have sustainable agriculture, and that really upset me.”

The EPA has acknowledged that increasing milk production by 50 per cent, as articulated in the Government’s Foodwise 2020 strategy, would pose “serious challenges” to this sustainability.

How can it possibly be sustainable in the future when it isn’t now? All those animals farting: what is it doing to our emission levels?”

he says. “The farming lobby is so strong that there is little or no public reaction, or maybe it’s just that people aren’t interested in climate change, because our climate seems to change every day.

“We’re wearing the same clothes all year round now, and getting gales at all the wrong times of year, and all people want to talk about is who got knocked out last night in the latest round of Dancing with the Stars,” he says.

“But then maybe this is more of the escapism that people crave. And our intense interest in other planets must be because we know we are finished here. During 85 per cent of the 4.5-billion-year history of this planet there has been global warming,” he says.

The scientists are 95 per cent certain about the impact of human activity, but that 5 per cent is enough to let in the voices of Trump and Healy-Rae, saying it is all up to God.”

"Nobody backed my climate film”

As preparation for the film that became a book, Quinn had researched three themes: climate change, migration and Irish mythology. He was struck by the fact that the Naval Service’s patrols in the Mediterranean were rescuing many migrants fleeing from sub-Saharan Africa, via Libya. One of the experts he interviewed was Dr Martin Claessens, of the Max Planck Institute for Meteorology, in Hamburg, who studies the rapid desertification of the Sahara.

From his computer-simulated study I realised that climate change, rather than war, is the main driver of migration.”

Quinn approached funding bodies but received no financial support for his film. “Everything, everyone, has a season, and perhaps I do too,” he says, but he can’t help thinking that his subject matter was too real.

“I can swim, I can use a boat, and I remember saying years ago that I would have a boat in the garden, ready,” he says.

He began to take grim pleasure in the idea that Dublin’s centres of power – the International Financial Services Centre, the corporate docklands, “even the film studios they want to build on the Poolbeg peninsula”, could and would all be under water.

But even satire has its limits now.

“Swift, Wilde, Vonnegut, Myles na gCopaleen, Ross O’Carroll-Kelly, Voltaire and the like are wonderful, and they still entertain us, make life tolerable, reassure us that we are not mad. But they never stopped a war or a plague. Never created penicillin or a cure for the common cold. So, unlike technology but exactly like all art, satire is not useful. In fact, like art, it is useless – but absolutely essential.

“It makes us imagine that life is sweet and can be hilarious. But it doesn’t stop politics from being venal and corrupt. It doesn’t soften sheer brass-neckery. It hasn’t stopped Trump.”

Only €1 for the first month.

Bridge on the River Kwai: ‘This film does not authentically portray the conduct of British officers’
8