Band of brothers: the Lockout with music and dancing

The Abbey Theatre’s adaptation of James Plunkett’s 1958 play ‘The Risen People’ takes in elements of music hall and vaudeville, and discards Jim Larkin 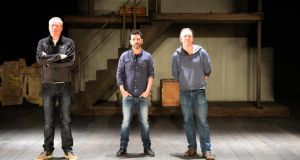 It’s easy to be sentimental – or cynical – about such concepts as solidarity and brotherhood. It’s not so easy to bring them to life. The Abbey Theatre’s new adaptation of James Plunkett’s 1958 play The Risen People aims to do just that, however, as director Jimmy Fay joins forces with pianist Conor Linehan and choreographer Colin Dunne.

The production will focus as much on music and movement as it does on Plunkett’s inimitable words: a multifaceted approach that can be traced back to the author. “The Risen People was written as a series of pageants in the late 1940s,” says Fay. “It then got expanded into a radio drama called Big Jim. When it became The Risen People in 1958, it had music and songs in it. Plunkett wrote When Larkin Came to Dublin Town, and he included The Mantle of Green as well.”

The Risen People was eventually to flower magnificently into Plunkett’s novel Strumpet City. The play focuses on a smaller number of central characters but, like the novel, it tells a big story. “There were 80,000 people on strike – a huge number in a population of 300,000,” says Fay. “We’re able to zone in and zone out; narrow it down to this one, almost- commune tenement building where these people live.”

Fay says the new staging does not preach. He sees it as an opportunity to take account of recent historical research about the Lockout, notably the wealth of detail in Padraig Yeates’s magisterial study, Lockout: Dublin 1913. “We thought it would be a good way to galvanise, energise, this period of history,” he says.

In particular, he felt, a dancer’s perspective would add a valuable extra dimension. “It’s an epic event and we’re doing it with nine actors and two musicians,” says Dunne. “Part of the challenge is to create intimacy of character for the individuals who are in this predicament, but also to re-imagine the sense of scale of the events that are surrounding them.”

For Linehan, rehearsals for The Risen People have been a revelation of a more immediate kind. “I don’t think I’ve ever worked with a company that was as much an ensemble – in the real sense of the word – as this company,” he says. “Everybody is equally invested in the success or failure of the piece. There are no hierarchies.”

Musically eclectic
As well as writing some new songs – music and lyrics – Linehan will provide live music along with the Congolese guitarist Niwel Tsumbu. “Musically, it is very eclectic,” he says. “During rehearsals we threw a lot of paint at a lot of walls – deliberately. We felt we must be as fearless as possible because there’s so much baggage around these political and cultural events. And so we felt we had to be open and brave and take what we got at the end of it.”

The cast appears to be well up for the challenge of a performance that includes elements of music hall and vaudeville. “Many of the actors are talented musicians in their own right,” says Linehan. “Charlotte McCurry, who plays Annie, is a flute player. Phelim Drew, who pays Mr Hennessy, plays guitar. Keith Hanna [Pat] is a good percussionist, and Lloyd Cooney [Joe] plays fiddle.”

Is there a danger of turning a theatre piece (which, after all, began life as a pageant), into a musical? “We’re not doing a musical,” says Dunne firmly. “Songs appear and then they disappear again. I was pretty clear that I didn’t want there to be Irish dance in the piece. I didn’t even work with a dance vocabulary.

“I’ve taught very little movement. It has been much more about working with the actors in the room to create energy when we need it and create chaos when we need it – and intervene whenever I felt I could intervene. Some songs suggest it.”

One such is the Linehan-penned Only The Whores Have Money, which all three say is a big, dramatic set-piece. “It allows us to indulge ourselves a little bit,” admits Linehan.

“It’s a kind of fantasy sequence for Mrs Hennessy, played by Hilda Fay, when she’s sitting in the queue for the pawn shop. She says, ‘Only the whores have money’, and then the footlights come on and the follow spot comes on. And then there’s this fantastic whirl of movement. And then at the end, bang: they’re back in the queue.”

Although Plunkett has generally been recognised as more of a humanist writer than a political apologist, there’s no mistaking the message of The Risen People. “People were locked out, and they were starved back to work. That’s what happened,” says Fay. “William Martin Murphy is the bad guy in this.” The point is underlined in a series of short comic films by Neil O’Driscoll, inspired by comic strips that ran in the Irish Worker newspaper at the time.

“He has animated ‘the shark of socialism’,” says Fay with glee. “And William Martin Murphy comes out in a phantom mask and then turns into a bird flying over Dartry House, with all the bodies of the workers lying there.”

The new production also takes liberties with Plunkett’s original cast of characters. In particular, it does away with the role of Jim Larkin. “Larkin is a bit Christ-like in the play,” says Fay.

“He comes in, is benevolent to people, and then disappears. But what matters about Larkin is how he galvanises and influences people through oratory – through his words. So we began to divide up his words among the cast. The people were the ones who were inspired by them, so why should they not be the ones to say them?”

Controversial move
It’s a controversial move, but Fay is unrepentant. “I feel we’re free to do this sort of thing with The Risen People because, although it’s a good play, it wasn’t Plunkett’s last word on it. He knew he would expand it into Strumpet City – whereas the play stands as something that you can leap off and explore the characters.”

In a similar spirit, Fay has added a prostitute, Lily Maxwell – played by Kate Stanley Brennan – to the cast list.

“Prostitution was such a major part of everything around here – and it was very important for us to mark that,” he says. “We gave Mrs Hennessy a long sequence on the stairs as well. Her husband is the guy who lazes about, so she never gets any cash – even before the strike. Then he starts scabbing and the community kind of turns against him.

“That’s when Fitzpatrick and the lads begin to show muscle. They turn away from outward rebellion and begin to turn on each other a little bit. It’s a very significant moment, when the story darkens.”

The Risen People is at the Abbey until February 4