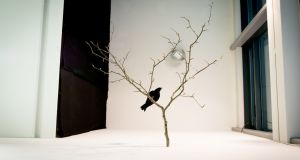 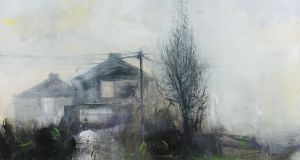 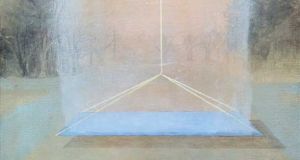 Detail from Relocation by Gillian Lawler

So Through the Singing Land He Passed – Sabine Mac Mahon
The Lab, Dublin
★★★★★

If you find yourself suffering from 1916 fatigue, Sabine Mac Mahon’s exhibition at the Lab might be just what you need. So Through the Singing Land He Passed is part of the gallery’s programme relating to the Easter Rising. Mac Mahon was invited to explore the Rising in the context of “visual commemoration”, from the emergence of a historical narrative of “near mythological proportions” to the multiple perspectives of revisionist debate.

She looked to the National Gallery’s 1966 commemorative exhibition, Cuimhneachán 1916, and neatly linked it back to a previous project of hers, her research into a little-known modernist group of Irish artists, the South Down Society of Modern Art, established in 1927. She discovered that one of the key artists in the group, Maimie Campbell, had approached National Gallery director James White in 1966, suggesting that her painting The Death of Cúchulainn might figure in the commemorative show. He deflected her offer on the basis that the exhibition was more documentary and historical than artistic.

The State’s memorial of the Rising, unveiled by de Valera in 1934, is the bronze cast of Oliver Sheppard’s sculpture that stands in the GPO. Its use as memorial to 1916 confirmed a seamless continuity between an idealised Celtic past and the sacrificial heroism of the 1916 leaders in the emergent nationalist narrative. Campbell’s pictorial version, although “closely modelled on Sheppard’s Pietá-esque figure”, is a lively, highly coloured work in tempera that attempts, Mac Mahon notes, “to reconcile the relationship between the archaic and the avant-garde in her idiosyncratic Kandinsky-via-South-Down . . . style”.

Her idea was to ask five younger contemporary artists, working across a wide variety of disciplines, to respond to Campbell’s painting. That painting features in the exhibition with the five contemporary offerings. The latter group includes performance artist Michael-John Cervis re-enactment of Cúchulainn’s demise on Grafton Street, Conor Dowling’s photographs of the several proposed locations where Pearse formally surrendered, Caoimhseach Ní Lamhna’s informal abstract evocations of heroic embodiment and light, Sophie Prendergast’s clever sculptural manifestation of the Plain of Muirthemne, where the hero perished, and Emma O’Brien’s monumental recreation of a popular representation of the mythical figure.

It all makes for a compelling experience. Dating back to her graduation show, Mac Mahon’s work has dealt, on the basis of meticulous research, with the appropriation, reinvention and creation of notionally authentic objects and primary documents.

Apart from the wonderful job Mac Mahon does on Campbell, she has equipped her five young artists with creditable works, each accompanied by a recognisable theoretical rationale. She has also provided them with brilliantly appropriate CVs, academic backgrounds (worryingly) tailored to produce exactly the kind of works we see in the show. She is, in short, inviting us to examine the construction not only of cultural historical myths, but also contemporary cultural practices.

Incidentally, John Beattie’s slide installation, Performing NGI.988, upstairs at the Lab, covers similar material in quite a different vein and is well worth seeing.

Bill Bryson’s reference to Centralia, Pennsylvania, in his book A Walk in the Woods drew Gillian Lawler to the town in 2014. Centralia fell victim to a still unfolding environmental disaster in 1962, when a vein of coal deep beneath it was accidentally ignited. It is burning still. The underground conflagration generates fissures and sinkholes and spews out toxic gases. As the years passed many residents opted for relocation, others hung on, until in 1992 the state governor issued the American equivalent of a compulsory purchase order – eminent domain – on all property in the borough.

Centralia is more a starting point than a conclusion for Lawler. She has taken photographs on site, but documentation is not the point of the exercise. Relatively few dwellings remain on an abandoned network of roads, as trees and other vegetation gradually reclaim the space and smoke curdles in the air. Lawler positions various orderly, geometric, patterned structures against these vistas. As she puts it, they seem to hang there, scrutinising the conditions beneath. These elegantly poised motifs appear delicately balanced against huge energies that simmer within and occasionally erupt through the earth: dreams and glimpses of order precariously won from chaos. The paintings’ finely tuned surfaces reflect that state of momentary, uncertain but beautiful stability.

Patricia Burns has built up a significant body of work dealing with the suburbs as an anomalous, in-between environment. But rather than emphasising the mechanical nature of suburban planning, with tidy grids of uniform houses, neat verges and green spaces, she has explored the feeling of the suburbs as living and lived-in spaces, sometimes from within, sometimes glimpsed in transit: cars, arrivals and departures are inextricable parts of the suburban experience. Burns favours moody winter light and half-light, mists and rain, and there is often a sense of the rural world lapping at the edges.

She is based in Cork but her recent work has brought her to Dublin, in imagination at least: painting from memory, she has reconstituted her childhood family home and its immediate surroundings on Ballyroan Road in Rathfarnham. The impetus was the death of one of her parents, and the ensuing duties of dealing with the family house and sifting through “decades of memory”. Burns paints with increasing skill and assurance, suggesting things rather than spelling them out. Mist and dampness are pervasive. The Back Garden recurs as a title and a subject. Overgrown and unruly, it has a symbolic gravity.

Darkness has undercut the utopian suburban dream from the beginning. Historically, the darkness of Ballyroan, for example, is encapsulated in the disappearance of schoolboy Philip Kearns in 1986, a mystery that remains unsolved and still haunts the community. Burns’s paintings do not address that mystery or any other specifically, but the unknown, the incalculable, always lingers at the borders of her painting.

It is a richly melancholy show, and a number of paintings stand out as being really exceptional, perhaps her finest to date.