Two intriguing group exhibitions ask whether we can believe our eyes 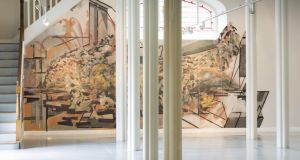 Neil Carroll’s How Many Is a Million? from the exhibition What Is and What Might Be at Highlanes Gallery What Is and What Might Be – Ten contemporary painters

The Drogheda Arts Festival has been and gone but the Highlanes centrepiece show runs on into June. Its starting point was one of the most famous paintings in Europe: Hans Holbein’s 1533 masterpiece The Ambassadors. The painting, an exercise in virtuoso realism, harbours a strange secret: an anamorphically distorted image of a skull, visible as such only when viewed from an acute angle. Psychoanalyst Jacques Lacan lighted on Holbein’s transgression of the rules of representation. Holbein undermines the viewer’s sense of superiority, of being in control, Lacan argued, unsettling an imagined order with a glimpse of mortality staring right back at us.

Three co-curators, artist Colin Martin, Temple Bar’s Cliodhna Shaffrey and Highlanes’ Aoife Ruane looked for contemporary painters who similarly choose to break the rules in various ways. Most radically, perhaps, Susan Connolly seems to undo the fabric of the gallery itself, apparently peeling back a layer of wall-covering to reveal bare plaster. But the peeled layer is actually paint, and we realise we are looking at a painting. It’s a visual conundrum worthy of the dialogue with Holbein that the curators have in mind.

The largest work is also site-specific, Neil Carroll’s How Many Is a Million?, a dazzling mural that explodes, figuratively speaking, the gallery space. Carroll’s constructed paintings have consistently explored the idea of using architectonic elements to make spaces that transcend architecture, and he does exactly that here. In a different vein, using geometric patterning, Miranda Blennerhassett does something comparable.

Fabrication is also at the heart of Kevin Cosgrove’s Workshop with Clock, in which we’re looking at a place where things – we are not sure what – are made and the tools and equipment used to make them, but not the things themselves, or the people who make them. What has been made is the painting. Fergus Feehily’s Cloud (reprise) is an image of a cloud, because he says it is and we can see the resemblance once he has pointed it out: in fact it’s a found piece of plywood in a found frame. You get the picture. Kevin Mooney, Mairéad O’hEocha, Mark O’Kelly, Kathy Tynan and Andrew Vickery also feature. The only problem with the show is that it leaves us wanting to see more from several of these artists, and it’s easy to think of others who could happily have been included. Until June 17th, highlanes.ie

Late in the 19th century, a pastoralist named Joseph Bradshaw happened upon a distinctive group of Aboriginal cave paintings in western Australia. The Aboriginal terms for them are Gwion Gwion, or Giro Giro. They’ve been the subject of debate and uncertainty ever since Bradshaw publicised the drawings he made of them. Then, in 2010, a Queensland neuroscientist, Jack Pettigrew, led an investigative team to study examples at 16 separate sites, and discovered something startling.

The remarkably vivid appearance of the figurative images was a result not of the durability of pigments used by the artists, but because they were actually alive. The original paint may have contained fungal spores, or may have been invaded subsequently. Either way, Pettigrew and his researchers concluded that no paint was now present in the paintings: “ . . . the pigments of the original paint have been replaced by pigmented micro-organisms”. The “paint” surface visible now consists of the current generation of two long-established symbiotic partners, black fungi and red bacteria.

Curator Mihnea Mircan was greatly taken by the Gwion Gwion. They are both ancient and contemporary and, in terms of conventional art conservation, ruined by contamination. In A Breathcrystal, Mircan takes the ideas of invasive bodies, cross-contamination and hybridisation and invites us to consider how they might have a bearing on some contemporary artists and projects. It’s a great premise. The textual elements may be contaminated by a typical curatorial urge to use language as a barrier rather than an aid to explanation, but A Breathcrystal (which began with an evening of screenings of related films at the IFI) is never less than intriguing.

One highlight is certainly Phillip Warnell’s short film Outlandish: Strange Foreign Bodies, inspired by philosopher Jean-Luc Nancy’s essay The Intruder, a reflection on his drastic experiences as a heart-transplant recipient and a cancer patient. Nancy features in the film, reading from a jointly written script that muses on the nature and integrity of the body, which he’s exceptionally well-qualified to discuss. Incidentally, the two have since collaborated on another film, about a man who kept an alligator and a tiger in his New York apartment for several years.

Appropriately, Melbourne-based Tom Nicholson is included, with works relating to the ill-fated Burke and Wills expedition of 1860. Deliberately defying the myth of heroic exploration, Nicholson details how the two came to grief by disdaining Aboriginal example in how to survive in the harshly inhospitable terrain. Facing starvation, they set about making flour from nardoo sporocarps, but neglected to roast the plants first, meaning enzymes that made the food indigestible survived. They starved to death while feeling bloated.

In her challenging interactive piece, Katerina Undo transforms the visitor’s mouth into an ear, drawing on a 19th-century technological bid to circumvent deafness. Siebren de Haan recorded Lonnie van Brummelen’s marathon performance in dragging a plaster copy of a Greek statue from Amsterdam to Lascaux as it disintegrated to chalk marks on the road. Miklós Onucsán carves the weights of stones into their surfaces – meaning they now weigh less. Jacqueline Mesmaeker’s The Androgyne, comprising two related sculptural tableaux, is subtle and beautiful. Jean-Luc Moulène, Phillip Warnell, Jonas Staal, Fabio Mauri and Lawrence Abu Hamdan also feature. Until May 30th, projectartscentre.ie