Visual art round-up: On the trail of Jack the Ripper in Drogheda 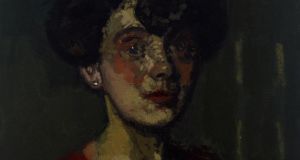 Detail from Head of a Woman (1906) by Walter Sickert 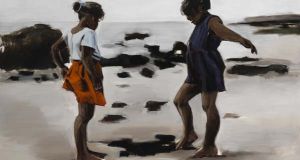 Detail from Condor and the Mole (2011) by Lynette Yiadom-Boakye

One Day, Something Happens: Paintings of People

As a writer and editor and not a curator per se, Jennifer Higgie brings an interesting slant to her selection of 40 or so works from the UK’s Arts Council Collection.

She is a long-term co-editor of Frieze, a contemporary art magazine, and was on the council’s acquisitions committee from 2011 to 2013. Besides being a novelist and screenwriter she studied painting and has written about art and artists so she is, in all, pretty well qualified to put something together from the 8,000-plus pieces in the collection.

To be fair, you could probably put a good show together from the collection armed with little more than a blindfold, a pin and a list. She disdained that easy option. Once she began to delve in earnest, she soon concluded that she would really like to do a show of figurative painting. Although the collection was begun in 1946, the earliest works in it are from the late 19th century.

Was Sickert the Ripper?

Chronologically, Higgie’s selection starts with Walter Sickert’s 1906 Head of a Woman. Despite its bold colouring, it’s a muted, even dark composition. The sitter was a French milliner. She and her sister worked as models for Sickert. She is depicted with one breast exposed, for no obvious reason. Sickert was at home with the dark side of urban life and relished the murkiness of the demi-monde. The thriller writer Patricia Cornwell became convinced that he was Jack the Ripper, purchased many of his works in search of clues to support her hypothesis, and published a book that conspicuously failed to live up to its subtitle, Case Closed.

More recently, DNA analysis came up with a more plausible identification of the murderer: a contemporary suspect who was a paranoid schizophrenic but, as an anonymous nobody, lacked the celebrity allure of Sickert and other comparably rich or famous candidates.

Perhaps Cornwell was unconsciously moved by the idea that to make an image of someone is to steal something from them, or of them, seeing Sickert’s dark depictions as equivalent to or evidence of a kind of invasive violence.

It’s an old idea that has gained new currency in a digital age when personal, intimate images are so publicly stolen and misused. Richard Hamilton ventured into this territory in a 1964 work that Higgie has included in her show, Portrait of Hugh Gaitskell as a Famous Monster of Filmland. Hamilton vents his fury at the Labour Party leader for his vacillation over nuclear policy in a cruelly satirical composite collage portrait that incorporates an eye from the title character of the 1959 film Jack the Ripper.

Art history is often presented as a coherent, linear progression. Higgie points out that “the real history of art is not neat; it twists and turns back on itself”, which is certainly the case. Artists generally don’t work in a logical, incremental way. They have widely differing aims and imperatives. They relate to their time and place, and to the history of art, in personal, unpredictable, often idiosyncratic ways. There are no rules, even though various orthodoxies might insist there are, and critical consensus can form around particular individuals and groups.

Higgie was drawn to works that “offer a unique worldview”, that “side-step the canon” and that embody a theatrical, narrative quality, which makes sense for a writer who works with narrative: her novel Bedlam is based on the story of the Victorian painter Richard Dadd, who became convinced that his father was a satanic imposter and murdered him. Confined to Bedlam, he continued to paint industriously for several decades, depicting an inner, fantasy world with great technical skill.

Walter Bayes’s 1932 painting sets the scene for Higgie’s choice: viewers in a theatre box gazing at an unseen spectacle. Another audience features in Malcolm Drummond’s 1912 Brompton Oratory. We don’t see the performers, but they turn up in many of the other paintings, such as Ceri Richard’s beautifully rhythmic Two Musicians from 1954 or the dance-like movement of the figures in Ryan Mosley’s 2011 Northern Ritual. And William Roberts’s bathers appear tightly choreographed in his 1966 composition The Seaside.

There’s a strong cartoonish strain running through works by Georgia Hayes, Renee So (whose paintings are made on a knitting machine) and Rose Wylie. Also noticeable is Higgie’s inclusion of a number of painters who, like Dadd (though without the psychiatric condition and homicidal tendencies), can be seen as aligned with an outsider tradition of mild eccentricity in British art and letters: Alasdair Grey, Jeffrey Camp, Bob Robinson, even Peter Blake and Euan Uglow. All excel.

More theoretical pieces, including those by Steven Claydon and Martin Westwood, seem laboured, and it would have been nice to have a real Frank Auerbach instead of Glenn Brown’s photorealist copy of one. But any chance to see work by Paula Rego and David Hockney is a chance worth taking, and Lucian Freud steals the show with his rapt, loving, diminutive 1954 portrait of Caroline Blackwood.