Visual Art round-up: Bent knees and a strange nostalgia for the future

Installations, painting, etchings and photography: four Dublin shows have it all 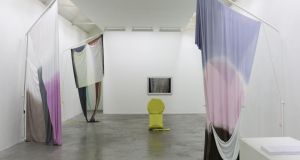 Bent Knees Are a Give by Isabel Nolan 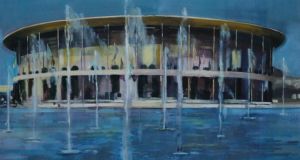 Detail from Pavilion by Graham Chorlton 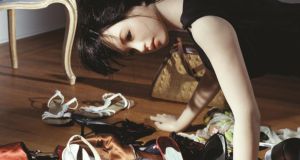 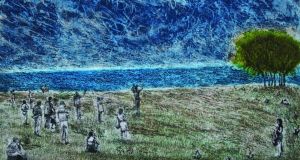 Detail from Apparition by Daniel Lipstein

Bent Knees Are a Give – Isabel Nolan

The poet and priest John Donne died in 1631. His memorial statue, at St Paul’s in London, was carved from a drawing, made from life, of him posing in his shroud. He knew that he was dying, probably from stomach cancer, and commissioned the drawing, reflecting partly on mortality but even more on immortality. When she saw the statue, Isabel Nolan was struck by his faith: he appeared content that he was about to meet his maker. Then she became disturbed by his knees, which seemed to her “a little knocked . . . slightly bent”. They introduced a note of uncertainty.

Delving further, she encountered the theory that the poet had not so much been contemplating death as imagining his own resurrection. The transcendent ambition of the gesture sits incongruously with Donne’s knock-kneed stance. The knees indicate for Nolan not just the frailty of human hope but an inherent, unacknowledged doubt.

In Bent Knees Are a Give, a group of works forming an effective overall installation, she explores that notion. The gallery is hung with a succession of coloured banners, but the bid for pageantry falls flat: they trail forlornly. Each flagpole is bent at the “knee”, as though unable to support itself . A lion, the king of the beasts, occupies the centre of the room. But it’s in the form of a cartoonish sculpture and it extends a paw pierced by a thorn, waiting for its St Jerome. It might all sound a little downbeat, but the abiding note is one of gentle melancholy, and there is humour. The show functions extremely well as an overall installation. Until May 16th, kerlin.ie

Graham Chorlton is one of many contemporary painters whose work could be described as post-photographic. He uses photographic sources of various kinds, including postcard reproductions and film, and retains photographic elements in his paintings, but they are not photorealist. For Pavilion the starting point was a family photo album found at a flea market in Brussels. Researching the images, he found that a group of them were taken at the 1958 World’s Fair in Brussels, Expo 58, the first to be held since the end of the second World War. They featured the American Pavilion. Chorlton is known for his paintings of the built environment, with an emphasis on moving through spaces; he’s drawn to anonymous but half-familiar urban settings and structures, often quite functional, often uninhabited, islands set in seas of roads. He was struck by the idea of the fair’s elaborate but temporary modernist architecture, assertively optimistic and forward-looking but instantly consigned to the past. And he captures that strange nostalgia for the future. Until May 2, crossgallery.ie

Daniel Lipstein’s etchings and aquatints have a dreamy, meditative quality not a million miles removed in feeling from the paintings of Marc Chagall. Lipstein’s work is informed by meditation, and he has written about keeping a dream journal.

He was born in Tel Aviv, and he sees the Mediterranean as an archetypal source and symbol, and it is the sea that features in his landscapes, along with his more immediate inland surroundings of the last 30 years or so, close to the Curragh of Kildare.

He also has a background in natural medicine, and his images are imbued with compassion. They explore human experience, from childhood to adulthood, in a gentle, allegorical vein.

Everything has a metaphysical weight and significance. The tree, for example, that recurs from image to image, could well be the tree of knowledge given its glowing, enhanced presence. This might sound forced or contrived, but it’s not. The aquatints are built up from several densely textured, coloured plates – plus copper dust judiciously applied – and the end results have an exceptionally rich consistency and surface. Until May 2nd, graphicstudiodublin.com

The Prix Pictet, an international photography exhibition and competition, now in its fifth cycle, is conceived and achieved on a daunting scale. There’s an extensive panel of nominators globally. They can propose work made in any genre of photography. The 11 shortlisted photographers feature in a touring exhibition. As well as an award of 100,000 Swiss francs, there’s a commission award. TeNeues publishes a substantial book with shortlist portfolios and selected images from the wider pool of those proposed.

Within the overall concept of sustainability, a theme is assigned each yearm and this time around it was “consumption”.

Sad to say, German photographer Michael Schmidt died just days after being named as the winner last year for his seven-year documentation of global food production, Foodstuffs. He was renowned for his low-key, sustained approach to his projects; Schmidt always shot in black-and-white with a small 35mm camera. A modest portion of Foodstuffs features in the Gallery of Photography’s concise but engrossing shortlist show.

The transition from one kind of photography to another can jar, so it’s not a smooth experience, but in the end the disjunctures work, emphasising the validity of radically different ways of dealing with a subject.

At one extreme, Laurie Simmons ordered a life-size Japanese “love doll” and made a body of work with the doll as model. At another, Mishka Henner made stunning satellite studies of North American beef cattle farms and oilfields. They can read as abstract images, but look more closely and the level of resolution is extraordinary.

Allan Sekula (who also died since the process was initiated) and Hong Hao also stand out, but there isn’t a dud among the 11. Until May 10, galleryofphotography.ie