A sprawling show pays tribute to Lynn, a humanitarian who was airbrushed from the 1916 picture 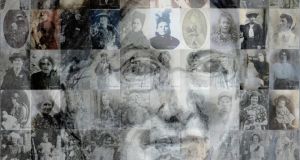 Detail from Matriline, a Kathleen Lynn Mosaic by Mary Kelly 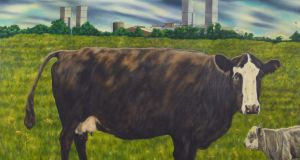 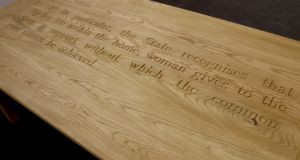 By any standard, Kathleen Florence Lynn ranks as a hard act to follow. Insider on the Outside is a co-ordinated series of exhibitions curated by Catherine Marshall, with the aim of paying artistic tribute to a woman whose role in Irish history was bold, imaginative and beneficial to a degree that shames the current political and administrative establishment. She was born in Killala, Co Mayo, in 1874. Her mother was a descendant of the Earl of Hazelwood, her father a Church of Ireland clergyman.

Her paternal grandfather, who died the year before she was born, had been a doctor, and the story goes that Lynn, appalled by accounts of privation and disease during the Famine, determined to become a doctor herself, her ambitions extending beyond the purely medical into social improvements. Undeterred by the obstacles placed in the way of women aiming to pursue a medical career other than in nursing, she went on to study medicine and qualified as a doctor. Her empathy for the socially and economically disadvantaged edged her towards radical politics and the Rising.

She was the first female doctor to be taken on by the Royal Victoria Eye and Ear Hospital, a fellow of the College of Surgeons, a campaigner for women’s suffrage and had set up home with her lifelong companion, Madeleine ffrench-Mullen. As chief medical officer of the Irish Citizen Army, Lynn instructed its medics and found herself in command of the rebels in City Hall following the death of Seán Connolly. She famously declared herself to be “a Red Cross doctor and a belligerent” after the surrender.

In 1919 she and ffrench-Mullen established St Ultan’s Hospital for Infants on Charlemont Street with minimal resources, staffed and run by women. From the beginning it exemplified Lynn’s philanthropic ambitions, aiming not just to cure ills but to educate and improve the lot of its disadvantaged patients and their families. St Ultan’s pioneered BCG vaccination against tuberculosis and opened a Montessori ward in 1934. Lynn advocated the establishment of a national children’s hospital. Although elected as a Sinn Féin TD in 1923, she was an anti-Treaty abstentionist. She parted company with Sinn Féin around 1926, reportedly because of the party’s lack of commitment to health and social issues.

Insider on the Outside follows an ambitious Mayo Arts Collaborative project held in 2013, when a composite survey show of work by Mayo-born Niamh O’Malley occupied five venues throughout the county. It was a good idea, not so much despite of but because of the extensive geographic spread of the county. Given the physical isolation of the venues, to symbolically link Belmullet to Ballina, Westport to Ballycastle, with Castlebar at the centre of the web, was a significant achievement.

Given the impact of the Famine on Lynn’s life, the inclusion of Patrick Graham’s epic lament Famine (Mayo Series) from 1995 is perfect. Its multiple, rhythmic bands of white paint, never quite becoming opaque, are like bandages on an historic wound. Will O’Kane uses a healing motif as well, painting on to layered Plaster of Paris bandages to make a series of magical seals or charms that span the range of Lynn’s concerns, from the immediate treatment of sick children to social and economic conditions, plus a nod towards her relationship with ffrench-Mullen.

Joanna Hopkins too picks up on the importance of their relationship. Every November 24th, ffrench Mullen gave Lynn flowers, “including cyclamen, azaleas, primulas and begonias”. Hopkins looks to the dried flowers, leaves and feathers included in Lynn’s diaries. A living floral display will be offered to visitors on the last day of the show.

Margo McNulty’s photo etchings delve into the archives to elaborate on the documented texture of her life in the form of correspondence (including a letter from Michael Collins), artefacts and diaries. The diaries are extraordinary documents, and would now probably be considered conceptual artworks, with a folio devoted to each day of the year. Thus, all entries for January 1st are written sequentially in a single folio, and so on.

Michelle Browne, Deirdre O’Mahony, Conor O’Grady and Seamus Nolan address aspects of Lynn’s concerns in the here and now: respectively, women’s politicisation in the whole of society; asking what Lynn would say of the plight of those coping with the reality of the Irish health system in the rural environment; the persistence of stereotypical gender roles in Irish society; and the emergence of the Kurdish female militia the YPJ.

Mary Kelly’s Matriline is a mosaic grid of images of Irish women from the date of Lynn’s birth to now, incorporating throughout drawings of 50 women involved in 1916. It is a bid to visualise the often discounted role of women in Irish society during this time. A supplementary piece alludes to Elizabeth O’Farrell, who was nominated by Pearse to deliver the surrender and was subsequently airbrushed – imperfectly, as the image of her boots demonstrates – out of official photographs of the surrender.

Geraldine O’Reilly and Dermot Seymour visit Lynn’s family home, the former depicting the house, the latter cows grazing in a field visible from the garden. In the background is the environmentally troublesome Asahi Chemical Plant, now a biomass power station.

Gary Coyle’s beautiful drawing of a tree is a view of the former site of Michael Scott’s ffrench- Mullen House, a social housing block adjacent to St Ultan’s, built as a result of campaigning by Lynn and ffrench-Mullen. It was demolished two years ago and is currently in the process of redevelopment, a salutary reminder that we could do with someone like Kathleen Lynn right now.