The naive and the knowing of Haitian art 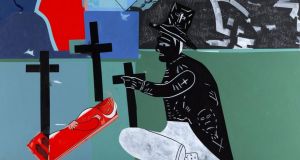 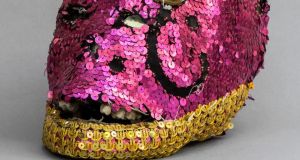 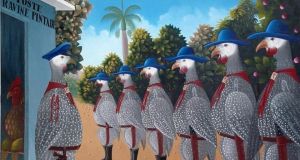 It seems miraculous that a country so blighted by slavery, dictatorship, epidemics, poverty and natural disasters should produce such original and vibrant art.

“The thing these artists all have in common is energy and an extraordinary ability to transcend misfortune. That is specific to Haiti,” says Régine Cuzin, co-commissioner of Haiti: Two Centuries of Artistic Creation, which is at the Grand Palais in Paris.

Haitian art is usually associated with the brightly coloured, so-called naive painting pioneered by the Obin brothers, Philomé and Sénèque, in the northern town of Cap- Haïtien a century ago. Their art’s syncretism of Catholicism, freemasonry and voodoo is characteristic of much of what followed.

In 1945 André Breton, the founder of the surrealist movement, visited Haiti and fell under the spell of Hector Hyppolite, considered one of the finest naive painters, whose work is characterised by childlike simplicity. Breton pronounced Hyppolite a surrealist.

Hervé Télémaque, a contemporary Haitian painter who lives in France, paid homage to Hyppolite in his 2000 painting Le Voyage d’Hector Hyppolite en Afrique. Disguised as Baron Samedi, the voodoo guardian of cemeteries, Hyppolite awakens a zombie. The names of Haitian and African dictators are scrawled in white chalk in the background.

Préfète Duffaut, a naive painter who died in 2012, spent a lifetime inventing the idyllic scenery with which he embellished his own coffin. But he was too fat for the narrow box, and sold it to a gallery owner in Port-au-Prince.

“The market has so focused on naive art that it prevented people realising there could be other types of Haitian art,” says Cuzin. The exhibition seeks to correct the imbalance, by emphasising paintings from the Saint-Soleil movement, conceived of as an exit “from the impasse of naive painting”, as well as works from those long- neglected abstractionists of the 1950s and 1960s.

Saint-Soleil was founded by the painter and ceramist Jean-Claude Garoute, known as Tiga, in the mountains above Port-au-Prince in 1972. Tiga provided paints and canvas to self-taught peasants and construction workers. The French writer and former culture minister, André Malraux, visited the artistic commune and called it “the most striking experiment in magical painting in our century”.

More recently the young Atis Rezistans (resistance artists) came together in a dumping ground for discarded cars at the southern end of La Grand-Rue, the main road in Port-au-Prince. They transformed salvage into an art form.

Most of these Grand-Rue artists integrate human skulls in their work, as if they were cast-offs, along with wheelchairs, carburettors, tyres and other salvaged objects.

Céleur Jean-Hérard’s three Zwazo (“birds” in Creole) – mother, father and daughter – stand like totem poles at the beginning of the exhibition. They are made of wood, tyres, plastic and recycled metal, and are beautiful and clumsy, humorous and almost sacerdotal.

The sculptures of Frantz Jacques, who was known as Guyodo, are reminiscent of the late French sculptors César and Arman. He often spray-paints them silver. When Guyodo was asked to create a sculpture in Paris for the exhibition, he had to obtain permission to pillage the city dump for materials. The resulting sculpture incorporates an immersion heater, a bicycle, supermarket trolley, pots and pans.

André Eugène christens his humorous creations with voodoo names. Legba is the guardian of the crossroad between the real world and that of the loas or voodoo spirits. As imagined by Eugène, he is a 5m-high rusting, lumbering figure with an inordinately large sexual organ. Eugène’s bust of the voodoo high priestess Madan Letan balances a goat skull on her ample breasts and two fighting cocks atop her headdress.

David Boyer and Dubréus Lhérisson met in a workshop that makes sequinned voodoo flags. Boyer’s collages of computer motherboards, cutlery and buttons replicate the feeling of the flags, but with the strange beauty of a Byzantine mosaic.

Lhérisson decorated seven human skulls with sequins, seashells, beads and tassles. “One cannot help thinking of Damien Hirst’s fake skull encrusted with diamonds,” says Cuzin. “But their philosophies are diametrically opposed. Lhérisson says there is nothing morbid about his skulls, since he makes them more beautiful and brings them to life.”

Some Haitian artists, including Manuel Mathieu, who lives in Montreal, and Mario Benjamin, who has remained in Haiti to mentor others, resent being automatically classified by their nationality. They deliberately shun visual allusions to the Haitian experience. “They want their work to be recognised on its own merits,” says Cuzin. “But it’s a long struggle.”

Mathieu’s work is strikingly similar to that of the Irish artist Brian Maguire. His paintings, and those of Benjamin, are on a par with the finest contemporary art in Europe and the US.

François “Papa Doc” Duvalier, the dictator who ruled Haiti from 1957 until 1971, used voodoo to terrorise his people. “It was impossible to mock the dictator openly, so artists used animals to satirise him,” says Cuzin. Fritzner Lamour was among the most effective, dressing guinea fowl – the symbol of the Duvalier family – in the uniforms of the police and dreaded tontons macoute militia.

“For many, the artistic response to dictatorship was exile,” says Cuzin. Sasha Huber, a Haitian artist who lives in Finland, turned her staple-gun portraits of Papa and Baby Doc Duvalier from the series Shooting Back into performance art.

Only one of the 168 works on exhibit at the Grand Palais was not created by a Haitian. It is a portrait of a dramatically handsome former slave, Jean-Baptiste Belley, on loan from the Château de Versailles.

Belley was born in Senegal, sold into slavery and became a member of the revolutionary French National Convention. In the 1797-1798 portrait by French artist Anne-Louis Girodet de Roucy, Belley wears a gold earring and the elegant attire of a fashionable Frenchman of the period.

The January 2010 earthquake killed more than 230,000 Haitians, injured more than 300,000 and left 1.2 million homeless. It destroyed artists’ studios and badly damaged two of the works on show in Paris. Yet it is rare for artists to address it directly.

Vladimir Cybil Charlier’s Postcard to Preacher Pat series is her response to the US televangelist who said the earthquake was God’s punishment for a “pact with the devil” concluded by revolutionary slaves at the end of the 18th century.

Sasha Huber’s video installation, Haiti Chérie, in memory of the earthquake victims, occupies a solemn, mesmerising place in the show. Huber lies in the snow, and spreads her arms and legs to make the imprint of an angels’ wings. Though she rises each time, a double of her blue- and red- clad figure (the colours of the Haitian flag) remains immobile on the ground.

By the end of the video, the figure has been multiplied hundreds of times in neat rows, like a graveyard in a snowy field of Huber’s adopted Finland.

Haiti: Two Centuries of Artistic Creation is at the Grand Palais in Paris until February 15th