A Harry Clarke masterpiece was purchased recently by the Hugh Lane Gallery. The small panel was originally created to be part of a larger window in the League of Nations Building in Geneva. It is now on permanent display in the Hugh Lane in Dublin City. Video: Enda O'Dowd 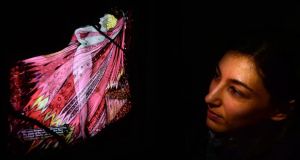 Silvia Brigada from Milan but living in Dublin views an original stained-glass artwork by Harry Clarke (which outraged the Irish government in 1930), on display at the Hugh Lane Gallery, Dublin. Photograph: Dara Mac Dónaill/The Irish Times

An original stained-glass artwork by Harry Clarke, rejected by the Irish government in 1930 as too scandalous, has gone on display at Dublin’s Hugh Lane Gallery. The work depicts a scene from Liam O’Flaherty’s novel Mr Gilhooley, showing a partially nude dancer, Nelly, Gilhooley’s mistress, covered only by a transparent veil. It was part of a series of eight panels, including 15 pieces inspired by the literature of Yeats, Shaw and O’Casey.

The piece was commissioned by the government for the League of Nations building in Geneva in late 1920s but was deemed to be unsuitable by the then president of the executive council of the Irish Free State ,WT Cosgrave. Instead it was installed in Government Buildings on Merrion Square.

The pane acquired by the gallery was Clarke’s original attempt to create the scene, but during its final firing, it developed a hairline crack. Clarke later remade this section. The 11¼ x 10¾ pane is a gold-pink glass panel, acided, stained and painted. It is set in ruby glass and leaded and inscribed by the artist in tiny handwritten letters: “She came towards him dancing, moving the folds of the veil so that they unfolded slowly as she danced”

The work was bought by the gallery for £35,000 from the Fine Art Society, London. Barbara Dawson, director of the gallery said the acquisition meant a rare and valuable Harry Clarke original was available for the Irish public to view freely. “Harry Clarke was Ireland’s greatest stained-glass artist. His marvellous imagination, his originality in depicting his subject matter and command of the stained glass technique makes him one of the greatest stained glass artists of all time.”

The later Gilhooley pane, unleaded and plated against blue glass, along with full set of panels known as the Geneva Window, is on display in the Wolfsonian Museum in Miami, Florida.