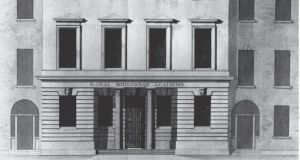 The Royal Hibernian Academy came into existence 23 years on from the Act of Union in 1800, with a royal charter and a modest annual grant. It was the culmination of a series of efforts to organise and promote artists and exhibitions in Ireland. The establishment of the academy, although a tacit acknowledgment of the pre-eminence of the Royal Academy London, asserted and defined Dublin as a centre of the arts. The original 14 academicians included William Ashford, architect Francis Johnston, John George Mulvany – father of George Mulvany, who would become the first director of the National Gallery of Ireland – and Thomas Roberts. In an act of extraordinary generosity Johnston, who was relatively wealthy, built the academy a home, Academy House, as part of a development on Lower Abbey Street.

As John Turpin outlines it in his comprehensive two-volume history of the RHA, the organisation followed the RA in its approach and procedures. While in Europe, the academic emphasis had tended to be on teaching artists, the RA prioritised collective professionalism and exhibitions. If the very term academy implies a constancy, a set of accepted standards, conventions, rules – in this case conventions inherited from the Italian Renaissance – Turpin makes it clear that academies were always works in progress, that rules were always contested, and any notion of set, enduring values was largely wishful thinking.

As it approaches its 200th anniversary, the RHA can pride itself on having survived many setbacks, several existential crises and on managing, sometimes reluctantly, to adapt and develop in relation to the world around it. Back in its early years, buoyed with confidence engendered by rising sales, it committed to paying its officials, a move that earned it a rap on the knuckles from the treasury and the slightly, but only slightly ambiguous stipulation that the academy could pay salaries if it wished, so long as the money came from its own profits and not the official annual £300 grant.

At which point its fortunes nose-dived. Certainly, the calamity of the Great Famine had crippling economic effects in Ireland, but there were other factors as well. Perhaps the novelty of an Irish academy had worn off. Attendances and sales were dropping steadily. The ominous result was a cumulative debt – two treasurers loaned their own money to keep the organisation afloat. Bitter internal divisions over the payment of salaries and the management of debt ensued. For a period the academy was headed by duplicate and antagonistic sets of personnel, with George Petrie on one side and Michael Angelo Hayes on the other. Petrie had championed one-penny admission to the annual exhibition, an egalitarian move that was financially detrimental: why pay a shilling if you could get in for a penny? Both were well intentioned, but the consensus was that only Hayes had a strategy to deliver economic viability. When Hayes was ousted, acrimony continued in the social media of the day: the various press outlets. The political solution – then as now, perhaps – was to commission an inquiry by civil servant Norman MacLeod, at the department of science and arts, South Kensington. His report, an exercise in textbook bureaucracy, concluded that there were too few academicians, that the Irish public didn’t appreciate fine art, that too many Irish artists looked elsewhere (London) for support and, charmingly, wondered whether the academy should have a government grant at all. On the plus side he argued that a larger grant was needed if the academy schools were to succeed. But then, the RDS schools were there. The department’s centralising bias leaned towards the RDS, and to survive at all the RHA had, reluctantly, to open itself to inspection of its schools by South Kensington. Still, the RHA was effectively relaunched, with a new charter that encompassed a wider membership. Gradually it became more organised, tackled the deficit and largely mended its internal politics.    The consolidation of the academy helped to encourage a shift in Irish art’s centre of gravity. With a growing domestic market for portraits and other easel paintings, including genre and landscape subjects, Irish artists could make a living at home. Add the growing influence of French painting and the Celtic revival and there was a distinct move towards a broadly based Irish visual culture. The RHA’s trials were be no means over, however.

As the 20th century began, the academy found its educational ambitions sidelined in favour of the development of the Dublin Metropolitan School of Art, even as the art market declined. More to the point, perhaps, having taken on board French realist painting, the academy found French Impressionism, which arrived in Dublin courtesy of Hugh Lane’s exhibitions, a bridge too far. As Turpin notes, this was the point where the academy ceded the progressive high ground to other actors on the Irish art scene and cast itself as an opponent of modernism, a role in which it grew increasingly entrenched. Yet despite establishment opposition, in a conservative cultural climate the academy was generally regarded as a progressive force.

The academy had been actively campaigning for a new building when the Easter Rising intervened. The annual exhibition was in progress. As fighting raged, the keeper, landscape painter Joseph Kavanagh, was painting one morning in Academy House when a piece of shrapnel from an exploding shell shattered a window and tore into the ceiling above him. The gunboat Helga had made its way up the Liffey and started lobbing shells into the city. Its target may have been either the GPO or Liberty Hall. Whether the Helga or artillery on the ground was responsible, a newsprint barricade on the street was ignited and the fire spread uncontrollably, engulfing Academy House. The hapless Kavanagh grabbed his chain of office, the academy charters and some other documents and ran for his life. The building was consumed by fire and with it the entire annual exhibition, the library, including all records, and Kavanagh’s life’s work – understandably, he never really recovered from the loss.  On the face of it, the academy’s prospects looked bleak. Not only had it lost its home and its archives, it was also heading into a period of unprecedented political uncertainty. Fortunately it had a capable president, the painter Dermod O’Brien, at the helm from 1910 to 1945. It managed, despite the suddenly incongruous “Royal” in its title, to adjust to the emergent Free State. In line with the RA, women began to be admitted as members, though gender imbalance is still an issue. Annual exhibitions continued, in the gallery of the DMSA and later the National Gallery of Ireland. It finally managed, in 1938, to acquire a new headquarters, or at least a potential headquarters since the building at 15 Ely Place was fundamentally unsuited.

A closed, cautious mentality seemed to heighten a distrust of the international modernist spirit driving European art. The establishment of the Irish Exhibition of Living Art in 1943 may even have pushed the academy further into insular conservatism. Identity tends to be accentuated under pressure. But just as the political ideal of economic self-sufficiency led to stagnation, the academy’s rejection of modernist thinking set it on a path of diminishing returns. To be fair, from the 1960s there were tentative signs of increasing flexibility, with the accommodation of more varied artistic personalities, but its reactionary reputation persisted.

The RHA Gallagher Gallery in Ely Place is now a well-known, auspiciously located arts venue. It might well not have been there at all. Dublin Corporation made a concerted effort in the 1950s to wrest the site from the RHA by compulsory purchase and turn it into a car park. Financial backing for a new building seemed a hopeless dream until developer Matt Gallagher committed himself to financing a building, designed by architect Raymond McGrath – a modernist. The process proved to be exceptionally protracted and uncertain. In the meantime, the Gallagher Group collapsed in the early 1980s. Matt Gallagher had died in 1974 (his brother Charles became involved in the project) and McGrath died at the end of 1977 (Arthur Gibney stepped into the breach). Several individuals including Ciaran MacGonigal (appointed director in 1992) and academic stalwart Thomas Ryan poured huge reserves of time and energy into advancing the plan.

Exhibitions were held in Ely Place from the mid-1980s initially in a building that was a long way from completion and, from 1989 and an official opening by Charles Haughey, a building that was relatively coherent if still incomplete. The problem was partly the scale and complexity of the building. Now it hosts a rota of several substantial contemporaneous shows while accommodating studios and the school – the prospects for which, incidentally, look more promising than at any other point in the academy’s history. Debt remains a significant issue. Carey Clarke and the late Conor Fallon were among those who played vital roles in reform and renewal, and the current director, Pat Murphy, has been an invaluable presence, proving exceptionally adept at balancing traditional and contemporary priorities.

John Turpin’s History of the Royal Hibernian Academy of Arts in two volumes, 1823-1916 and The Academy in Independent Ireland is published by the Lilliput Press, Dublin