Paper sculpture in a pulp-press pavilion 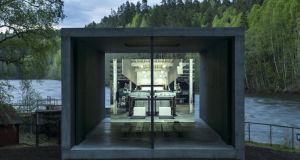 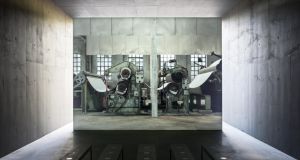 When a paper mill beside a Norwegian river folded after 100 years, in the 1950s, the founder’s great-grandson bought it back and turned it into a museum and sculpture park. Now, in this postindustrial site, pieces by illustrious artists such as Anish Kapoor, Marc Quinn and Tony Cragg dot the landscape. They have recently been joined by the work of the Tipperary-born artist John Gerrard, who collaborated with A2 Architects, a Dublin-based practice.

On his fourth or fifth visit to Kistefos Museum and Sculpture Park, 60km north of Oslo, Gerrard was struck by an old pulp press and set out to create a virtual version of it. The artist had worked with machinery before, creating pieces involving oil pumps in the American landscape.

Gerrard points out that the pumps animate the landscape as oil animates our world, and he draws a parallel with the huge impact of pulp paper and printing on disseminating information to the masses, so it was no longer restricted to an elite with access to rare manuscripts.

The pulp-press sculpture was months in the making, beginning with research into the Norwegian paper industry. Gerrard took copious photographs of the industrial pulp press. Then his team spent 18 months building a 3D mesh model and replacing parts that were missing from the original. Next they fed this into a gaming machine that turned the press into a virtual world, creating not a film but a simulated projection.

The work is in two parts. One projects images of the machine in action on to a freestanding wall, making a machine portrait of the pulp press. The other simulates the production of paper pulp – and actually produces 6mm cubes of it. These are stored in the pavilion on shelves that are added as needed. The artist has calculated this as three shelves a season. The pavilion will reach its shelf capacity in 2043.

Wishing to contextualise the pulp press alongside the river that gave rise to the paper mill’s existence and production, Gerrard brought in A2 Architects, with whom he had collaborated on his studio, in Vienna, and on Pig Slat Benches, at the EVA exhibition, in Limerick. (This involved benches made from pig-pen flooring, installed in an empty office in a former bacon factory.)

The pavilion they designed at Kistefos is, in a sense, like a camera that encloses the moving image. The pavilion was cast from concrete, relating it to a nearby concrete pier on the river and a hydroelectric power plant moulded with shuttering. Doubling its meaning, the architects took the shuttering and turned it into large doors that work as camera shutters, being opened and closed at different times of day to provide the right light for viewing the moving image of the pulp press.

The second layer of the building is the freestanding wall on which the simulated projection shows, and around which a band of daylight beckons viewers beyond the wall, to a balcony overlooking the river.

“It was an eye-opener,” says Peter Carroll of A2 Architects of both the collaboration with the artist and of working in Norway. “It was very special for us . . . particularly when we have such a strong heritage from Viking times. It was like returning the compliment.”


Well connected
It was quite surprising how well connected Ireland and Norway are, he says. “We would definitely work there again if we had the opportunity. It is so close, has a buoyant economy and a society that is open to outside professional input: there were no questions asked about our capacity to carry out this project.

“We have come across difficulties in Ireland where we have had to persuade some clients that we are very capable. In Norway we found a great acceptance of the ability of architects and artists to work together.”

The architects made many site visits during which the project evolved. “It was by no means something we decided on from a distance,” says Carroll.

The opening of the sculpture was a local event, with about 1,000 townspeople coming along and sharing champagne and hot dogs. “It was for everyone: carnivalesque,” says Carroll. “It was lovely to see people queueing up to view the pavilion. It made us think that every building could have a party: local people are being asked to accept these works. I think we will be writing it into our contracts, going forward,” he says with a smile.

John Gerrard will be showing another project at the Galway Arts Festival, from July 15th