New portrait of Edna O’Brien unveiled on her 90th birthday 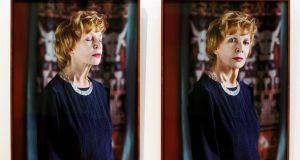 The portrait of Edna O’Brien by photographer Mandy O’Neill which was unveiled at the National Gallery of Ireland on the writer’s 90th birthday. Photograph: Maxwells

A new portrait of Edna O’Brien has been unveiled at the National Gallery of Ireland, to mark the writer’s 90th birthday.

The diptych by Zurich Portrait Prize-winning visual artist Mandy O’Neill is the latest addition to the national portrait collection at the gallery.

O’Brien said she was delighted to have a “place on the walls of the National Gallery of Ireland”, and added she hoped to return to Ireland soon for her first viewing of the portrait.

O’Brien, who was born in the Co Clare, but has lived in London for many years, has written more than 20 works of fiction since her first novel, The Country Girls, was published in 1960.

The Country Girls was described in The Irish Times by Eimear McBride in 2017 as “one of the most famous, infamous, beloved and influential Irish novels of the 20th century”.

The book was banned by the Irish censor due to content deemed too sexually explicit; it was followed by two sequels, Girl with Green Eyes and Girls in Their Married Bliss. The Country Girls and its two sequels were chosen as a trilogy for the One Book One City initiative in Dublin in 2019.

O’Brien has also written a number of short story collections, plays and works of non-fiction. Her latest novel, Girl, was published this year and won O’Brien the Kerry Group Irish Novel of the Year award.

Head curator of the National Gallery of Ireland, Dr Brendan Rooney, said the gallery was delighted to include O’Brien “among an impressive list of Irish literary greats already represented in the national portrait collection”.

“In an outstanding portrait, Mandy O’Neill presents her subject as both outwardly confident and intensely introspective,” he added.

O’Neill, who is Artist in Residence at Dublin City University, won the Zurich Portrait Prize in 2018 for her portrait of a Dublin school student, Diane, at Larkin Community College.

The diptych is currently on display at the National Gallery of Ireland, and admission is free. This year’s Zurich Portrait Prize and Zurich Young Portrait Prize exhibitions will run until March 2021. nationalgallery.ie