Money, sex workers and an awful stench in Zurich

Compacted excrement, a poker game between transgender prostitutes, and a floating wheelchair all vie for attention at the jam-packed art biennial Manifesta 11 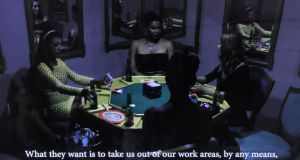 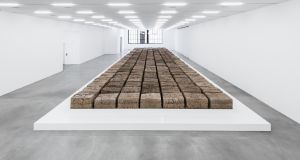 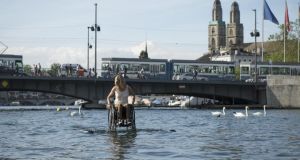 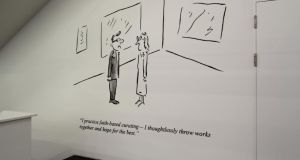 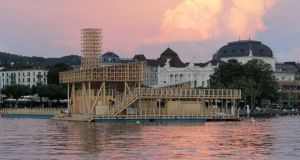 Europe and the “European project” are going to remain in the news for some time. Integration versus diversity, community versus edicts, free markets versus social support . . . It’s not always clear what the European project means, but it is important that the conversations, and the thinking, continue freely. The same could be said for Manifesta 11, the roving European biennial exhibition, which takes place this year in Zurich, a city in a country that’s geographically at the centre of Europe but not a member of the EU.

The exhibition is spread across two main venues with 30-plus satellites (which aren’t actually galleries), a floating pavilion-cum-cinema-cum-swimming pool-cum-bar, and a series of outdoor sculpture commissions. It’s hard to get a grasp of what is actually going on.

The central idea, and tagline for the exhibition, is “What people do for money”. In pursuit of this, artist and curator Christian Jankowski invited 30 artists to collaborate in what are called “joint ventures” with professionals: from the police to sex workers, dog groomers to chefs. The results of these projects are shown as artworks, films in the pavilion, and in some of the shops and offices where the collaborations took place. No wonder it feels confusing.

Some of the collaborations work better than others. Mike Bouchet, working with the Werdhölzi Wastewater Treatment Plant, has created The Zurich Load, an epic sculpture that consists of a day’s worth of human excrement, compressed into a grid of minimalist blocks. I’m reminded of the persuasive presence of Donald Judd’s pristine aluminium boxes and the calm poetry of Walter de Maria’s permanent SoHo installation, The New York Earth Room, until the pungent smell of the beautifully ordered waste, of beautifully ordered Zurich, drives me from the room. Outside, exhaling deeply, I realise the hidden ugliness behind everything human. It’s how we deal with that – face it or hide it – that matters.

Local feature
Videos of the collaborations are shown at the beautifully named Pavilion of Reflections, a wooden structure designed by Tom Emerson, floating on Lake Zurich. It’s a great spot, and the combination of swimming pool and bar isn’t so outlandish when you take a walk round town; these are a local feature. Parked up beside the pavilion is a wheelchair on a raft. This is the work of ultra-famous and frequently shocking artist Maurizio Cattelan, who had announced in 2012 that he was giving up art, but evidently didn’t.

Cattelan teamed up with Paralympic athlete Edith Wolf-Hunkeler for a performance piece in which she appears to walk, like Jesus, on water – except she’s gliding in her wheelchair. The idea is gorgeous and the promotional photographs perfect. I searched for someone who had seen it for real, but to no avail. Stick around the pavilion, because you never know.

Another project that was perhaps better in concept than execution was Guillaume Bijl’s collaboration with dog stylist Jacqueline Meier. They set up Hundesalon Bobby on the premises of art gallery Greider Contemporary. So far so good, except a sign on the door reads “To the performances of Jacqueleine Meier you can’t bring your own dog for a haircut. Thank you for understanding.” Maybe it’s the rigid social codes of Zurich that make us want to react against the rules (see panel), but we immediately started to look around for someone else’s dog to bring.

The idea of comparing artists at work to workers at work loses its intensity after a while, and as with all exhibitions, what becomes more interesting are individual highlights rather than the overarching agenda of the curator.

The exhibitions in the main venues of the Löwenbräukunst and Helmhaus also include further artworks and objects, including, oddly, a copy of the kitschy Calendario Romano, which features monthly pictures of moody priests (buy yours online at calendarioromano.org). The best art here includes Teresa Margolles’s Poker de Damas (2016). A collaboration with sex worker Sonja Victoria Vera Bohórquez, it’s a video of a conversation over poker with transgender prostitutes, which is tender, unsettling and ultimately tragic.

Art commodification
At the other end of the spectrum, Jonathan Monk’s gold leaf This Painting Should Be Installed by an Accountant (2011-2016) is a perfect comment on the commodification of the art world. Fernando Sanchez Castillo’s short film Pegasus Dance: Choreography for Riot Trucks (2008), which sees a pair of water cannon trucks “flirting”, at first seems opportunistic, but let it grow on you and you start to find yourself realising the loneliness of hostile positions.

Peppered throughout the Löwenbräukunst are Pablo Helguera’s cartoons. The New York-based Mexican artist worked with weekend newspaper supplement Das Magazin, and created a series of drawings based on the pretensions and absurdities of the art world. They should be required reading at all art colleges.

Overall, Manifesta 11 is jam-packed but patchy. There’s a cacophony of work and information, so it can be hard to spend time with the ones that really sing. I could have given Jon Rafman’s Open Heart Warrior hours, were it not for the omnipresent press of more to see, not all of which was worth seeing. Rafman’s collaboration was with a health spa, but his immersive video piece was a world away from the sunlit forest and whale song staples of such places. Instead you lie on a reclining chair and are treated to a three-channel video of hideous apocalypse. “You wander in an endless fog . . . ” the voiceover goes. “It had to end and it did.”

What is the point of it all? Sometimes artists are simply asking us to pay attention to things that don’t seem important until we think about them. In Imbissy, American-born artist John Arnold is teamed up with a Michelin-starred chef, Fabian Spiquel of Maison Manesse. Their project recreates lavish embassy dinners from history in street food stops and kiosks.

Sounds like an arty excuse for a fancy dinner? Possibly, but watching the film, I learn about the 1897 visit of the king of Siam to the Grand Hotel Victoria in Bern. It was the first time any Thai royal had left their kingdom. The purpose was to stave off the threat of colonisation. They talked as well as ate, and the visit was a success. Thailand is the only country in that region never to have been under colonial rule. The project is about “alternative forms of diplomacy”, suggests the exhibition text. We need them now more than ever.

DADA 100: A CHARTER FOR RULE-BREAKERS
One hundred years ago, as the first World War raged across Europe, a group of artists set up the Cabaret Voltaire. The artists’ tavern is at Spiegelgasse 1, in Zurich’s old town, just down the road, though not deliberately, from Lenin’s apartment.

It became the base for Dada, an art movement whose sole intent seems to have been to break all the rules.

Hans Arp, Hugo Ball, Emmy Hemmings and Sophie Taeuber were joined over time by key figures including Marcel Duchamp and Francis Picabia, who has a major retrospective at the Kunsthaus Zürich, which will travel to Moma New York in November. James Joyce, who moved to Zurich in 1904, and who died there in 1941, is claimed as an ambassador of Dada.

As Zurich celebrates Dada 100, I wonder if, as a time traveller, I would have been frustrated or excited by them. They liked to run into bars, shriek “Dada” and run away again, and a recreated Dada poetry event left me both bored and bewildered.

On the other hand, a poster for The Blindman Ball (in aid of Duchamp’s Dada magazine) in New York in 1917 promises an event that’s “Ultra Bohemian, Pre-Historic [and] Post-Alcoholic”. What’s not to love?

The Cabaret Voltaire is still there, preserved as a bar and shop, and throughout Manifesta, you can drink Dada Sours, made with absinthe, and join the (temporary) Artists’ Guild. The price of membership? You simply have to give a performance.

Summer is an astonishing finale to a prescient series
10