Michael Kane: A fierce integrity to be applauded

Reading, writing and publishing have been significant areas of endeavour, not distinct from printmaking and painting, but all facets of one imagination, one sensibility 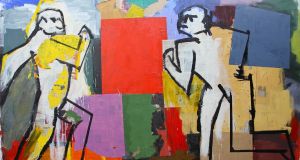 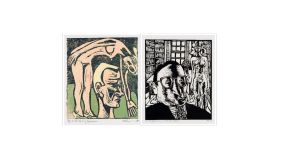 ‘At the Tomb of Agamemnon,’ from the Agamemnon Felled Series (1984); and ‘The Red-Haired Waitress Abducted by the Bookseller’ (1975)

Modality of the Visible: Michael Kane

Few would have predicted the turn taken by Michael Kane in his work a few years back. This most resolutely figurative of artists seemed to embrace a new pictorial language, one that inclined towards abstraction, with blocks and patterns of colour. The paintings were and are not dissimilar to the work of Hans Hofmann, one of the progenitors of American abstract expressionism. True, Kane tended to muddy his colours, and he retained a penchant for causing headaches for conservators by blithely incorporating ephemeral materials in the mix.

Also, as it happened, he had not set sail into the deep waters of abstraction per se, which a painting like Joggers confirms. Rather he had been continuing his observation of the ragged textures of the urban fabric and the figures within it, modulating them somewhat, perhaps, but essentially continuing. Look to his work in the 1980s, as gable blocks of vivid colour assert their presence in compositions that are more overtly representational but still visibly related to the recent work.

While he does not at all shy away from abstraction, he has previously noted that he finds certain kinds of abstraction too easy, that it was “less rigorous” for not being anchored to representational content. But he has always maintained that form matters centrally to him, it’s never a question of content eclipsing form, and that is a kind of abstraction. Modality of the Visible is a survey show with a retrospective dimension, though it is weighted towards more recent work, a little unevenly, perhaps. It still offers a good chance to contextualise that work in terms of his extensive oeuvre.

For more than 50 years now, Dublin has been not just the dominant setting in which he’s worked, but an integral part of the work, just as it is for Joyce in Ulysses. He has always had one foot in the literary camp, so to speak, and one in visual art. Reading, writing and publishing have been significant areas of endeavour, not distinct from printmaking and painting, but all facets of one imagination, one sensibility.

So, as for Joyce, his Dublin is both a real city and a mythic space in which contemporary individuals are both themselves and also embody mythic archetypes. It’s a seamless process: a canal diver becomes Icarus, a bather a nymph. Yet Kane doesn’t mythologise the city. He is drawn to specific aspects of its geography and topography, to gnarled, worn, fairly rough sections of it, places with history and attitude. Although he was born in Dublin, he grew up in Ashford in Co Wicklow, an experience that did not inspire a sympathy for Irish pastoral. In fact everything about his work suggests that he distrusts ideas of the picturesque or nostalgic romantic as applied to Irish landscape painting. In a country were a generation of artists had turned from the urban to embrace the romance of the West in the glow of the Celtic Twilight, Kane was like the boy who ran away from the circus to get a job in the city.

That may be partly because he always views a setting in terms of the people who inhabit it. And, without wishing to overstate any implied political agenda, that means not those who enjoy a position of ownership and privilege, but those who work and struggle to survive. In the past he’s pointed out that Ireland was on the way to becoming an urban society well before the transformation registered culturally. We persisted in living with the dream of a rural idyll that never really was. He is no more a landscape artist in the city than he was in the country.

That is, while he appears strongly attached to the urban environment, in his work it is, more often than not, bleakly beautiful rather than picturesquely attractive, and sometimes it’s a distinctly tough, scarred setting in which people pursue their lives, as in his series of paintings based on a huge disused mill. That was when he found himself in the docklands. Before that, his Dublin was long centred on the literary quarter of Baggotonia, which in its own way has a certain rugged texture. Occasionally individuals in his paintings might pause and catch a glimpse of something lovely, something caught in the kind warmth of the summer sun, but don’t count on it.

A truculent, combative presence in Irish cultural life in the late 1960 and 1970s, he was a pivotal figure in the Independent Artists. They sought to establish a third way, an artistic path between what they saw as the stagnant academy and the rarefied, abstraction-inflected modernism of the Living Art. He was vocally critical of Arts Council policy. While he was an activist, he was never political – political, that is, in the sense of having an ability to manoeuvre within existing hierarchical structures of administrative power in pursuit of particular goals.

His early work is often associated with German Expressionism, though he has argued that he was looking elsewhere and what emerged had more to do with the way his personality and imperatives coloured his perceived influences. Those influences he identified as being more in the direction of Matisse than, as one might have assumed, Beckmann. The people in his paintings often seem caught up in feelings and roles that are beyond their control, which of course accords with mythic archetypes. The men tend to be blocky, blokeish and awkward, though there was a distinct earlier type in his print works: a dislikable sexual predator. In general they come across as self-regarding and oblivious. Women fare better, though they often assume the role of objects of desire. At the same time, that is not quite fair, there is an honesty about sexual desire in Kane’s work that is mostly admirable. He was, and remains, nothing if not direct, and his fierce integrity is to be applauded, not least for its relative rarity.