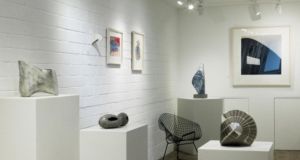 A glimpse of O’Connell’s exhibiton in England which can now be viewed virtually. Photograh: Steve Russell Studios

Gallery Pangolin is that rare thing, an art gallery devoted to the exhibition of sculpture, plus drawings and prints related to sculpture. Not surprisingly, its roots are firmly in the practicalities of making sculpture.

It was initially established as an art foundry in the mid-1980s by Rungwe Kingdon and Claude Koenig, occupying “a ramshackle greenhouse” in an Oxfordshire garden. Such was the demand for the foundry’s services that it soon outgrew the limited space available.

Kingdon and Koenig found a new location, in a beautiful setting at the edge of the Cotswolds, Chelford’s Golden Valley, close to Stroud. They’ve stayed there while expanding over the years. From being a traditional, lost wax foundry, they grew to accommodate sand-casting and much more, including ventures into 3D printing and other digital technologies.

In the process, Pangolin has become the largest arts foundry in Europe. From being a two-person operation, it’s close to being a 200-person operation. Besides the gallery, incidentally, there is also a charitable arts foundation in Uganda (where Kingdon grew up), with the aim of enabling African sculptors.

Kingdon and Koenig are married. They met at art school and realised they shared a fascination with sculpture, and particularly with the alchemy of casting.

While they have over the years worked on a stream of prestigious projects and with many illustrious names, their own names are probably not that familiar, because they are first and foremost a backroom team; they figure out ways of giving concrete form to artists’ ideas.

One of the artists they’ve worked with is Irish sculptor Eilis O’Connell.  Since 1993 they’ve been involved in casting and fabricating her sculptures. “Her sense of form and material have always appealed to us”.

They had invited her to have a survey exhibition of her work at Gallery Pangolin. That in itself is quite a compliment because they are passionate not just about the quality of the sculpture they produce but also, it seems fair to say, the sensibilities of the artists they work with.

Through an unfortunate accident of timing, O’Connell’s exhibition, which is substantial, coincided with the coronavirus crisis and the gallery had no option but to close its doors to the public. However, their extensive experience in the digital arena opened up the possibility of at least partial access.

The exhibition was there, and they had the means to make it virtually available. Now, via their website, you can embark on a digital walk-through of the show, and it is well worth doing. One can see why people intensely interested in sculptural technique would like what O’Connell does.

She works across an extensive range of scales, materials and forms. There is always a kind of sinuous elegance to what she makes, but take any individual piece and it’s never slick or facile or ingratiating. And it has a tough centre, a dense core of concentrated energy.

Large-scale public works alternate with sculptures you could hold in one hand. She is fascinated to the point of obsession by the qualities of a surface and will invest limitless amounts of time and energy until a piece feels as well as looks absolutely right.

She does have a consistent language of form, though it extends beyond the bounds of any one grammar or syntax in terms of artistic style. Rather she touches on, say, abstraction but without subscribing to any orthodoxy and, as Kingdon mentions, she is rigorously reductionist but not minimalist.

She responds instinctively to forms, remarking once that she simply loves objects. They might be entirely natural, as in gourds – a particular passion – or other plants. Her use of them usually has to do with a sense of containing or enfolding. Or they can be extended and linear, undulating and reaching upwards.

Some years back she observed that, living and working as she does in the middle of a rural, agricultural landscape – her capacious studio a former creamery – she couldn’t but absorb the feeling of constant, burgeoning energy and growth, both managed and in nature, all around her.

She is equally drawn to man-made objects, from the ring-forts in Co Donegal that originally engaged her when she was growing up to smaller archaeological finds or fragments of more recently abandoned tools and vessels in the fields.

Or, a more recent, intriguing development, she might find something, a feather, or a bird’s nest (the latter coming under the heading of animal architecture), a piece of coral, a skull, and encase it as is in a block of clear cast resin, a series she titled Found/Given.

Some of her pieces hybridise the natural and the manufactured as the title of a 2012 piece, Grown/Made suggests. It features a group of five vessel or pod-like forms from which exploratory, spindly stems snake tentatively upwards.

Kingdon refers to another duality: how the forms she makes exhibit “a simultaneous feeling of great antiquity and novel modernity”. Again, touch is always important – she titled her outstanding 2011 show at the RHA Haptic.

Between antiquity and modernity there is perhaps a timeless quality to her work. It compares to the spare urgency of traditional Inuit artefacts and culture, emerging from vital engagement with a vast, unforgiving environment.

There’s wonder, beauty, pragmatism and even fear. The Canadian writer Larry O’Connor, fascinated by the people of the far north, quotes an anonymous Eskimo verse with a simple refrain:

“I am afraid
When I watch the stars
Moving on their nightly trails,
I am afraid”

That sense, of being acutely attentive to and aware of natural patterns without for a moment taking them for granted or being reassured, comes close to the spirit of O’Connell’s work.