Cow pats but no bull: a cultural meeting place for myth and reality

Megahits from Game of Thrones to the Marvel universe are suffused in myth; so where are the echoes of Irish myth in contemporary culture? It turns out we’re surrounded by the stuff Sean Lynch’s For the Birds, which works with the myth of An Buile Suibhne 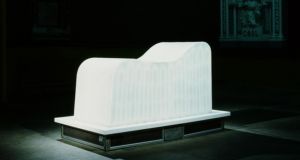 Alice Maher’s Mnemosyne: a couch made from ice 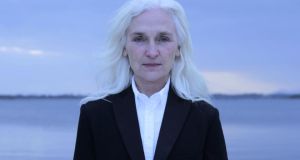 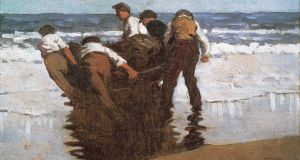 Launching the Curragh, by Paul Henry

What connects a block of ice at the Irish Museum of Modern Art, a cow pat in Carlow, the poetry of WB Yeats and Tom Murphy’s play Bailegangaire? The answer is myth.

A source of material, as well as a more indefinable set of inspirations, mythology spreads across the art forms, making its presence known in sometimes unexpected ways. At its most extreme and populist, the success of Game of Thrones; and the Marvel Avengers franchise, which features frequent dips into the mythological Norse world of Asgard, demonstrate the enormous appetite for myth in contemporary culture.

Think of myth in Ireland, though, and we’re more apt to envisage Cúchulainn, the warriors of the Fianna, Celtic scrolls and swirls, and images of bare-chested heroes and long-tressed maidens. These are the overworked shorthands for a romanticised sense of an ancient and purer Irishness, appearing from Riverdance to the art of Jim FitzPatrick.

What about contemporary Ireland? What do today’s writers and artists make of myth, and does myth even matter in today’s scientific and more secular society? The answer is yes, and possibly just as much as ever. From overt references to subtler signals, myths creep through the cracks to pervade thought and sensibility.

When well-handled, myth reaches into the psyche to touch something beyond language, and that, after all, is where the best art makes its presence felt and matters most – and that’s also why myth never goes out of fashion, but endures, in new and intriguing ways.

Alice Maher’s Mnemosyne, shown at Imma in 2012, was a couch made from ice, set on a condensing unit. Glowing in the dimly lit gallery, it drew moisture from the atmosphere and freezed it to become part of the sculpture. Mnemosyne was the Greek goddess of memory and forgetting, inventor of language and mother to the nine muses. In Maher’s work, it’s a brilliant metaphor for the vast potential of inspiration, and also its fragility – definitely mythological in origin, yet a world away from Tír na nÓg.

Myths are metaphors, standing for more than themselves; but they are also an attempt to understand the otherwise inexplicable, stretching towards a sense of something we can’t quite touch. Pre- science, myths explained the seasons, the rising and setting of the sun, life and death, as well as a set of subtler things. As such, they tap into the parts of our brain that respond to the symbolic, and can create extraordinarily powerful works of art.

As Ireland modernised, myth, in the hands of Lady Gregory and WB Yeats, offered a spiritual counterpoint to the new nationalistic basis of Irish identity. Meanwhile, Paul Henry connected to something deep in the landscape of the west of Ireland for his now iconic paintings. However, as all three discovered, work that draws on myth can be used itself to mythologise, and their various visions were put into service to construct an identity for the new Republic. Just as myth can make sense of the world, it can also impose meaning on it.

Sean Lynch’s For the Birds, on show at Visual, Carlow, until January 11th, 2015, works with the myth of An Buile Suibhne, or the Frenzy of Sweeney, which by historical reference dates from AD 637, but more recently occupied the imaginations of Flann O’Brien, with his brilliantly wicked and wonderful At Swim-Two-Birds (1939), and Seamus Heaney, with his 1983 Sweeney Astray. Lynch’s fascination with the myth of Mad Sweeney, which tells the story of King Sweeney, cursed by St Ronan to be half-man, half-bird, stems from his interest in twin tensions, still evident in Ireland today: Christian and non-Christian; rural and urban.

Sweeney is cursed to be a wanderer. His animal half is in love with wild nature, but epically lonely, too, while his human side needs to settle. As Lynch says, in what could be a motto for modern Ireland, “it’s a hard thing to be neither one nor the other”. In the Sweeney story, the mad former king finds solace on a farm at St Mullins in Carlow, where the cook each evening sinks her heel into a cow pat and fills it with milk for Sweeney to drink. It doesn’t end well. The woman’s husband grows jealous and kills Sweeney with a spear.

It would be easy to dismiss a cow pat in a vitrine on a plinth in a gallery as one more example of the fraudulent excesses of that anything-goes branch of contemporary art. But Lynch, who will represent Ireland at next year’s Venice Biennale, is using it to create connections, rather than to shock. Visual is one of Ireland’s largest galleries, but is set in a rural town. In a countryside redolent with cow pats, why should it be so astonishingly strange to see one in a gallery?

The shock value grows the farther we get from the source of things. Thomas Kinsella was another poet who liked to get to grips with myth. In Nightwalker (1967), he wrote, “Clean bricks are made of mud, we need them for our tower”. Myth is all about getting closer to that source.

Lynch and Maher are part of a newer tradition exploring and exploiting Irish myth in art, that includes Patrick Graham, Brian Bourke, Patrick Hall, Katherine Boucher Beug and James Coleman. And in For the Birds, the cow pat is a symbol of sustenance, on a physical as well as an emotional level.

The artist brought a nice-looking cow and her calves into the gallery to give him the raw materials too, underlining again that strangeness of contemporary Irish life, where we are increasingly urban, and yet just a generation, if not a family member, away from the land.

But the resonance of myth here is not so much about the passage of time and contemporary dislocations as it is about finding a link to deeper strategies for survival, and the way humanity makes stories in an effort to understand the world. No wonder it endures.

For the Birds by Sean Lynch is at Visual, Carlow, until Jan 11

Doctor Who landed in 1950s rural Ireland last night. The fiddles never stopped
2 Why Dr Seuss is the real hero of children's literature
3

At school with a serial killer: growing up with Jeffrey Dahmer
9