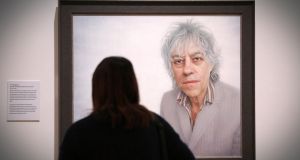 English artist Nathalie Beauvillain Scott has created a portrait of Bob Geldof entitled ‘F*** Mondays’ which is among the pieces on display at the BP Portrait Award exhibition which opens at the Ulster Museum in Belfast on Friday. Photograph: Kelvin Boyes/Press Eye. 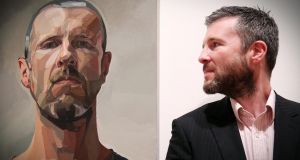 Local artist Gavan McCullough is pictured with his self portrait at the exhibition which is among the pieces on display at the BP Portrait Award exhibition which opens at the Ulster Museum in Belfast on Friday. Photograph: Kelvin Boyes/Press Eye. 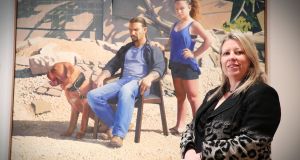 Paintings by five Irish artists feature in a new international portrait exhibition opening at the Ulster Museum in Belfast on Friday.

It is the first time since 1998 that the BP Portrait Award exhibition, on loan from the National Portrait Gallery in London, has been shown in the city.

The centrepiece is the winning portrait by Matan Ben Cnaan, the first Israeli winner of the £30,000 prize, for his portrait Annabelle and Guy.

His work is inspired by the Old Testament story of Jephthah, a judge who led the Israelites into war with the Ammonites and vowed to God that, if he won, he would sacrifice the first thing he saw on his homecoming.

He expected it to be the dog, but to his horror, it was his only daughter who rushed out to greet him.

The 36-year-old artist said he hoped “the tension imminent in the moment of realisation of the horrible price one must pay is reflected in the composition”.

Stormont culture minister Carál Ní Chuilín welcomed the arrival of the most “prestigious international competition of its kind” to Belfast. She noted the exhibition had launched the careers of “many renowned artists”.

“I urge everyone to come along and experience the spectacle of these portraits, they are a colourful and compelling reflection of our own humanity,” she said.

“I also hope this exhibition will encourage local artists - both established and aspiring - to express their creativity and create works of their own.”

Kim Mawhinney, head of art at National Museums Northern Ireland, was one of the six judges who selected the winners and the 55 exhibition pieces.

Ms Mawhinney believes the wide range of artistic techniques on show “will appeal to a wide audience, both young and old. “

The BP Portrait Award 2015 Exhibition will continue until June 12th. Admission is free.