Auctioneers say canvas could be famous painting ‘The Rush Gatherers’ 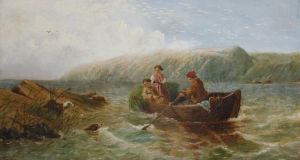 A famous 19th century painting of Lough Corrib in Connemara by James John Hill – believed lost for over 150 years – has unexpectedly been found.

Returning Home, Connemara, to be sold at Sheppard’s art auction next week could, said the auctioneers, be the missing canvas but further research is needed.

The oil painting depicts an unusual image of three people in a boat harvesting reeds from the lake. During cataloguing for its sale, Sheppard’s of Durrow, Co Laois, discovered that the unique image was familiar from a well-known 19th century print and undertook further research.

The importance of the painting was revealed by the late Maura Scannell, one of Ireland’s leading botanists, who discovered the image, by chance, when she saw a print at a book fair in Dublin in 1996.

She identified the vegetation being harvested as “Common Reed, known as giolcach in Irish and botanically as Phragmites Australis”. The reeds would have been used as animal bedding and possibly for roof-thatching. The image shows the boat being rowed by an oarsman wearing a red cap, a woman in the centre with a sickle in her right hand, and a young girl in a pink petticoat who tends a sheaf of vegetation in the stern. On the shoreline two dogs play in the shallows.

Ms Scannell described the The Rush Gatherers, Lough Corrib, Connemara, Ireland as “a rare image of post-Famine Ireland and for this period there are few paintings”.

In June 1860, a colour print of a painting titled The Rush Gatherers, Lough Corrib, Connemara, Ireland was issued as a free supplement, intended to be framed by readers, by the Victorian weekly newspaper, the Illustrated London News. The artist was James John Hill, an English painter who visited Ireland in the decade after the Great Famine and painted scenes of people and landscapes in the west .

It is believed the original was acquired by Herbert Ingram, the publisher of the newspaper but its fate is a mystery. He died in a drowning accident in America three months after the print appeared in his paper. It is not known what happened to the original painting.

Bill Hader: “What I liked about the script was that he has lots of problems, but being gay isn’t one of them”
9