Art that’s at home in the material world

A group exhibition curated by Janet Mullarney is accessible, unpredictable and rewarding 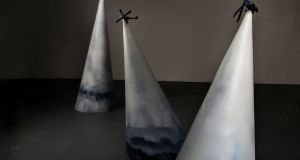 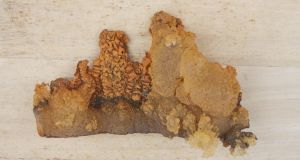 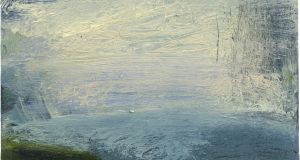 A painting by Melita Denaro

Two Birds/One Stone concludes with Albanian artist Adrian Paci’s memorable video The Story of a Stone. It’s a beautiful and slightly troubling video. In it, a big oblong of white marble is quarried in China, loaded on to a cargo ship and, during its voyage to Europe, with its hold open to the sky, transformed into a classical column by a group of Chinese craftsmen. Paci, who initially became known for works dealing with the theme of migration, puts lots of ideas into play here.

There’s globalisation and the relationship between the West and China, the latter a major source of materials, labour and manufacturing workshops for the former. The marble column, made to order, and made with real skill, is a classical pastiche, recalling the production of imitation luxury goods and facsimile artworks. But there’s also a stirring, almost mythological quality, an echo of Ulysses, to the video, as the ship cuts through the waves and the craftsmen toil.

In context Paci’s work can be seen as exploring and testing the exhibition’s premise. The curator was artist Janet Mullarney, and her rationale was to look for work, mostly sculpture, in which the constituent material or materials are vital to the finished piece, not alone in its physical form but also conceptually. She does not say so, but she might have in mind the diminished role of a connection between artist and medium in contemporary art. Conceptual artists can hire expertise in any manual or technical skill but retain creative control. They need not know how to do anything themselves, except perhaps have ideas and use a smartphone.

Not that Mullarney is of the opinion that an artist should stick to one medium. Although she is a notably gifted carver, she works in many ways with many materials, and is fluently at home in a language of representational forms, as her wonderful touring show, My Mind’s i, demonstrated last year. And the artists and work she has included in Two Birds make clear she’s not just looking for an exclusive dependence on one material or means of working. She has in mind a more open-minded discussion about the subject.

The piece that appears under her name, for example, tells the story of a Degas sculpture of a horse. It was modelled in wax but not cast during his lifetime. When it eventually was, some of the wax around the armature had perished and the result is not as he would have envisaged it. But, Mullarney points out, it’s an exceptionally dynamic piece that expresses its equine subject in a free, effective and audacious way. Not at all something lesser or flawed. Yet the materials and the process shaped what we see, encompassing and then surpassing the artist’s intentions.

She takes a similarly thoughtful approach with the artists she has invited to exhibit, never opting for easy points about means and ends and often surprising us. What attracts her, it seems fair to say, is an artist who is involved not only with ideas but also with materials, who thinks carefully about materials and is, or becomes, immersed in the processes related to them and the responses they elicit. This usually entails a manual, sensory engagement, over and above a purely intellectual one.

She has come up with a refreshing choice of exhibitors, reaching throughout the country and occasionally beyond. It’s notable that her list includes a number of artists who could be described as underrated, not least for reasons of geography. The best way to approach this show is to bear Mullarney’s rationale in mind and take each piece as it comes. Within that framework, they are all accessible, unpredictable and rewarding.

Melita Denaro splits her time between London, where she has a studio, and her home on the Isle of Doagh, an area in the far north of the Inishowen Peninsula in Co Donegal. Doagh’s elemental landscape is at the heart of her work. Her identification with Doagh is intense and rhapsodic, but at the same time her paintings are firmly rooted in the reality of the place and are not an idealised version of it. In this respect, her lengthy titles should be regarded as part of the paintings, because they pin them down, tying them to specific times, places, events and individuals, and draw in Denaro’s thoughts and feelings.

Each work is built with layers of textures and swathes of colour. Cattle or humans are present more often than not, but they are usually dwarfed by the epic grandeur of the environment. These diminutive presences are like keys that unlock the door, establishing scale and allowing us into the world of the paintings. Weather rules, swirling and roiling through the compositions, throwing shafts of sunlight across a scene or enveloping it in deep shade. Stillness is rare.

Denaro depicts animals with great feeling, embodying cattle, grazing or resting in sociable groups, with mounds of impasto. Generally, humans are tiny, hardly there, but the one figure painting in the show, Dilu at St Jude’s Street, has great, classical poise and substance.

The show’s title comes from Seamus Heaney. Denaro was introduced to him following a talk he gave at Ballyliffin on Inishowen. He asked her where she was from. She was schooled in England and was conscious she had lost her local accent, but she named her birthplace, Burt, not far away. He smiled at her and said: “On home ground then”, which pleased her immeasurably.

Pierce Brosnan: ‘I was an only child from a fractured family’
10

Patrick Kielty: ‘We weren’t sure how many people would turn up – 400 queued around the corner’
Real news has value SUBSCRIBE