Art review: unexpected views at ‘Slips and Glimpses’ and the world map reimagined 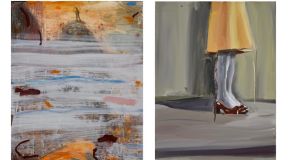 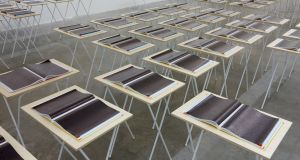 The title “Slipping Gimpses” references a statement by the artist Willem de Kooning, when he referred to the content of a painting being a glimpse and, even better, an off-balance, unexpected glimpse, a “slipping glimpse”. Effectively, this two-person show consists of two solo shows with no conscious connection but a happy congruity of manner. Anna Bjerger and Robert Armstrong are both slipping glimpsers. They arrive at their respective glimpses by different means but for both what counts is the work that follows on from the glimpse, the alchemy that can occur when you make marks with paint.

Writing about Bjerger’s work, Christian Viveros-Fauné described it as “a type of 21st century photo-based impressionism that pushes far beyond the usual postmodern art”. Just as the 19th century plein air and impressionist artists had set out to convey an optical truth, Bjerger, he suggests, has her sights on what might be called a photographic truth. That is, her paintings reflect the reality of living in a photo-saturated world. Rather than going out and setting up her easel in the street or the countryside, she trawls the ocean of photographic imagery in which we swim and nets as her sources examples that spark her interest.

In the work of Luc Tuymans, the photographic source is usually a pallid trace, an echo of a diminished, impoverished reality. Bjerger takes a more generous view. While there is a sense of distance and anonymity to her often fragmentary, truncated images, her paintings are made with evident love for the medium – and love for the image as embodied in paint. She works on aluminium panels and apparently relishes the fast, slippery nature of the metal as a support.

It’s an unforgiving support. The fresh, vibrant energy of each piece is part of its appeal, but stems from a certain instability in the process, which demands both fluidity and fluency on the part of the painter. One false move could sink the painting. It’s not a question of building up a dense, polished image in layer on layer of glazes. Rather it’s a matter of blending a series of moves all of which constitute one complex, quivering surface.

Armstrong seeds his paintings with references, but it’s reasonable to describe such references as being metaphors or even, on occasion, decoys. He revisits classical western paintings and/or biblical imagery, and specific geographical locations. Previously he has looked to an island that is gradually disappearing due to climate change. Here, he alludes to the extraordinary rock column Sigiriya in Sri Lanka, briefly a fortress, then a Buddhist monastery. The notions of transience, change and disappearance recur. The western face of Sigiriya, it is thought, was once covered by a vast fresco.

The cloud as motif runs through his paintings. It’s a magical cloud, as in the pillar of cloud, a symbol of divine intercession that guided the Israelites. Everything – including clouds – is there, one feels, so that he can get on with the business of painting, something that holds true for Bjerger as well. Jazz comes to mind, as when jazz musicians take a tune and reinvent it, not aiming to create a pure performance of an iconic original, but using the tune as a starting point to make something new, embracing possibility, fluidity, invention.

For “Atlas”, Kathy Prendergast has appropriated 100 copies of the AA Road Atlas of Europe and laid them out, opened, each atop a small folding table, to make up an approximate, composite map of Europe. At first glance the gallery resembles a classroom. Have a look at one of the atlases, though, and it seems that someone’s been messing around with a black marker. Every page has been carefully blacked out, leaving just a network of white dots in no apparent order.

The dots are cities and towns. Borders, coastlines, mountains, rivers, lakes, communications networks – everything has been obscured leaving just these signs of life, points of light glowing like stars in the night sky. Atlas follows directly on from Prendergast’s “Black Maps”. Some works from that series, focused on the Czech Republic and Slovenia, are currently on show in Gallery 2 in the Douglas Hyde in Trinity College.

She is not prescriptive about the meaning of the maps, but they do invite interpretation. She removes layers of information to bring to the fore an essential truth. The amended maps evoke, for example, a sense of common humanity, emphasising the fact that humans are isolated beings clinging to life on a small planet speeding through a vast darkness. This at a time when borders, divisions, exclusion and sectarianism are all to the fore.

She’s by no means sermonising about all this. The work is quiet and understated. And the abiding feeling is a certain melancholy, even sadness. Perhaps this line of interpretation is coloured by an awareness of recent history and current events, but it does seem to come across strongly, even as the work implicitly argues for a more positive realisation of our place in the wider world beyond petty differences and prejudices. The only drawback to the installation is the practical limitation of the Kerlin’s layout. Ideally, the work should be positioned in an even larger room and doubtless, at some stage in the future, it will be.