Moorhen Call from the Smell of the Pond, it Seems to Furrow the Smooth Surface of Silence 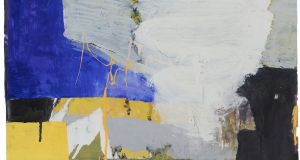 Moorhen Call from the Smell of the Pond, It Seems to Furrow the Smooth Surface of Silence by Eamon Colman, 2019-2020 (Solomon Fine Art)

What is it?
Moorhen Call from the Smell of the Pond, it Seems to Furrow the Smooth Surface of Silence, a painting by Eamon Colman.

How was it done?
It was painted with oil and other media on Japanese paper.

Where can I see it?
It is included in The Width of Yourself, Colman’s current exhibition at Solomon Fine Art (Balfe Street, next to the Westbury Hotel, Dublin, until February 29th, solomonfineart.ie).

Is it a typical work by the artist?
Not quite, perhaps. Colman built his reputation and following as a painter of works that combine an evident delight in the lively play of colour and form with allusions to mythic or magical narratives. There was, in a great deal of his work, usually an interplay between the landscape per se and the inner, imaginative landscape. To some extent Colman set out to substantiate these realms of the imagination through his travels, spending time in India, some of the southern regions of the United States and, closer to home but equally spectacular, the Kerry coast. He mentioned Bruce Chatwin’s Songlines as an exemplary attempt to gain a sense of the landscape as written into the lives and imaginations of people.

Colman’s father was the painter Seámus Ó Colmáin. Rather than following directly in his footsteps, the son found his own artistic path. After what he recalls as a bruising time with the Christian Brothers, his parents switched him to infinitely more encouraging environment of The Dalton, a Jewish school in Rathmines, followed by a Protestant school, but his parents decided not to encourage him to pursue a third-level education.

He worked as a labourer, travelled in Europe, apprenticed and studied landscape gardening, took night classes at NCAD. All the time he was gravitating towards painting, bringing to even his early work the instincts of a storyteller, including references to Celtic mythology. As Iain Biggs notes in his thoughtful, wide-ranging introduction to The Width of Yourself, a significant shift occurred in Colman’s work around 2016-2017, when he began to tone down the colour. Not just the colour, in fact – he also reassessed form, beginning to use a cancelling gesture, applying opaque bands of paint.

For those who warmed to the exuberant brightness of his previous work, the transition may be disconcerting, but there’s no question but that the recent work, more inward and less performative, reflects greater artistic maturity. Biggs links that to the artist’s increasing awareness of environmental realities, living as he does in a rural setting. Certainly, as the new paintings indicate, he is closely aware of the temper of the climate on micro and macro levels. As the extensive titles suggest, he has not discarded the storytelling urge, but the stories he tells here are more rooted in the daily encounters with the living landscape, and less concerned with a mythic dimension that is, with climate change, coming increasingly under threat with inexorable environmental destruction.