A vision of the future that's a ‘Hunger Games’ in reverse 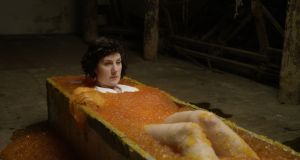 Still from A Numbness in the Mouth, (2016) by Kevin Gaffney 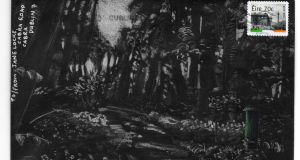 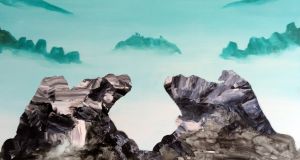 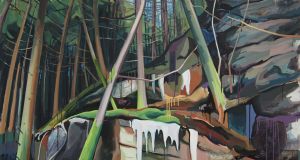 Fifteen years on from the first Futures exhibition at the RHA, episode one of series 3 (there will be three annual episodes in the series) is on view. You could describe Futures as a showcase for emerging artists, but from the start the idea was that it highlight artists one step on from emerging, whose reputations were in the process of consolidation, artists who had built up constituencies of their own. That is still the case.

Kevin Gaffney’s short film A Numbness in the Mouth was made on the basis of the Sky Academy Arts scholarship in 2015. It premiered at the Linenhall in Castlebar, Co Mayo, and featured in a survey show of his work at Millennium Court in Portadown. It is an offbeat dystopian fantasy shot in the spectacular setting of the disused Shackleton flour mill on the Liffey at Lucan. Gaffney imagines a future, authoritarian Ireland in which food production and consumption are balanced – by law. As you can imagine, strange dietary distortions result, as surpluses must be consumed. Two performers, both women, front a frenetic TV show designed to promote appropriate consumption – The Hunger Games in reverse. But off camera they drift into personal reveries, as the setting and the materials stimulate their inner lives and sensibilities. The unresolved contrast between two idioms, the brash, pop culture game show and dreamy introspection, is characteristic of Gaffney’s work as a whole.

How to be Other than a Body

Jane Locke’s research-based projects draw on actual rather than potential or speculative histories. Conceived for The Lab as part of Dublin City Council’s 1916 commemoration programme, Tales from a Green Post Box explores the history of the Irish post box. Her starting point was the central role of the GPO in the Rising. Postal technology was, she points out, the internet of the time, relatively speedy and efficient, and dependent on a network of technologies that have faded away, just as, 100 years on from Easter 1916, “our cast iron post boxes have started to disappear from our streets”. They were not always green, of course. One of the first acts of the Irish government was to cover the scarlet post boxes with emerald green paint.

Jane Rainey shone in last year’s NCAD MA show. She is a painter, and her work encapsulated both how technique can be a trap for a painter and how to escape from that trap. She has great flair and ability with paint, but always strives to second-guess herself, never settling for the lure of facile effects, always upping the ante. There’s a generosity to her vision, which encompasses anything that gains a hold on her attention, be it cartoon imagery, literary fiction, travel writing or classical painting. She embraces visual disruptions, borders, opposites, contradictions and inexplicable whimsical impulses. In all, a good equivalent of experiencing the world.

Unfortunately, there is only room to mention Elaine Hoey’s The Weight of Water, which applies gaming technology to convey the harsh reality of migrant voyages in the Mediterranean, and also game-like, though in a different way, Richard Forrest’s perceptually challenging sculptures and installations.

There’s a magical, storybook quality to Cecilia Danell’s The Last Wilderness, which incorporates a series of paintings, photographs, laser-cut plywood, drawings burnt into plywood and a film shot in super eight. Though resident in Galway since 2004, Danell is Swedish, and Sweden and Norway are at the centre of this body of work. One main strand of inspiration is the startling Norwegian landscape: she enjoyed a residency at the Nordic Artists’ Centre Dale there in the early part of last year. Another is an exceptionally lovely Swedish provincial theatre, which is the main location for her film.

She contrives a drama in which the performers are animated geometric forms, constructs. Just as theatrical characters are indeed constructs, perhaps? Utilising landscape sets in the background, she leapfrogs from the charming artifice of the theatre to the actual landscape, locating her geometric forms in abrasive environmental terrain. We get a sense of moving through multiple layers of representation, and in a sense we arrive in the fairly uncompromising setting of Norway: dense forestry, hard-won habitations, breathtaking mountainous landscapes.

There’s a continual, telling play on the line between realism and artifice in the paintings. The implication is it’s a line that is necessarily crossed once an artist picks up a paintbrush. For underlying Danell’s work is her proposition that: “In a postnature future, the human mind will be the last wilderness.” In a nice touch, the film projection, in which the provincial theatre features, is flanked by a minimal theatrical set of laser-cut plywood trees. A landscape of the mind. And a terrifically effective one, too.