A crash course in the history of European art 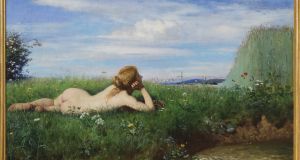 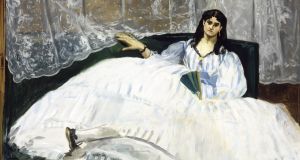 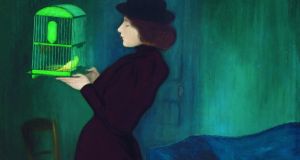 Detail from ‘Woman with a Cage’ by József Rippl-Rónai

A shapely young woman lies naked on her stomach in a field of wild flowers. The chignon at the nape of her neck is half undone. She leans on her right hand and stares at the bird above her. Puffy white clouds advance like a squadron of flying saucers.

Is Skylark, made by the Hungarian painter Pál Szinyei Merse in 1882, beautiful? Or kitsch? The viewer wavers. It provoked a scandal in late-19th-century Budapest and Vienna, greater than those created earlier by Courbet and Manet in Paris.

Critics ridiculed Skylark, but Hungarians came to love it.

“This painting violated all the rules and trends. It is daring, ahead of its time. And it could only have been painted in central Europe, ” says Laurent Salomé, commissioner of the beautifully curated Masterpieces of Budapest: Dürer, Greco, Tiepolo, Manet, Rippl-Rónai, an exhibition at the Musée du Luxembourg, in Paris, until July 10th.

The French have taken advantage of the three-year closure of the Museum of Fine Arts in Budapest, and its merger with the Hungarian National Gallery, to borrow 85 of the best paintings, sculptures and drawings from a collection of more than 10,000 works. Most were amassed over centuries by the Esterházy princes, the Hungarian equivalent of the Medici, in Florence.

“We wanted to tell a story, create the Hungarian atmosphere in miniature, show a Hungarian vision of European art,” Salomé says.

The largest concentration of Hungarian works is in the first, late Gothic section, and in the last room, on symbolism and modernity. The intervening six rooms present a mostly linear crash course in the history of European art.

Under the influence of Albrecht Dürer, the “Danube School” emerged in the 16th century as an alternative to the Italian Renaissance. Yet Dürer’s arresting portrait of a young blond man, dressed in black against a red background, painted between 1500 and 1510, was influenced by his own stays in Italy. The faint, crooked smile is reminiscent of Leonardo da Vinci.

Although Dürer took great care over the young man’s hair net and ribbon, black fur collar and brocade coat, he concentrated most on his pleasant but distant expression. His identity remains unknown, although he may have been Dürer’s brother. His dress indicates that he was middle class.

Also during the German Renaissance, Lucas Cranach the Elder painted Salomé in the attire of a lady at court, holding the severed head of John the Baptist on a platter.

A supporter of the Reformation, Cranach was the first to publish and illustrate Martin Luther’s Bible. Art historians say that his Salomé represents not only the perils of female seduction but also the church’s persecution of early Protestants.

Leonardo seems to float over the cinquecento room, which is to say the room that focuses on the 16th century in Italian art, with its reversion to classical forms. It contains a small equestrian bronze, believed to be the only surviving sculpture by the Renaissance genius.

Giovanni Antonio Boltraffio was a student of Leonardo. In his Virgin and Child the face of Mary bears a strong resemblance to Leonardo’s Madonnas, and may have been completed by him. The wood it is painted on was proved to have come from the same tree as the Virgin of the Rocks in the National Gallery in London.

The church responded to Protestant accusations of idolatry with the Counter-Reformation. In 1563 the Council of Trent decided that religious art should be pious and instructive, ending mannerism and profane subjects in religious art.

Doménikos Theotokópoulos, known as El Greco, was a painter from Crete who studied in Venice and Rome before settling in Toledo, in Spain. His paintings of the penitent Mary Magdalene, the Annunciation and St James the Lesser – all on loan from Budapest – correspond to the ascetic principles of the Counter-Reformation. El Greco’s St James is believed to be a self-portrait.

Religious art gradually evolved towards the Baroque. A century and a half after El Greco’s deeply spiritual figures, Tiepolo painted a triumphant St James at the Battle of Clavijo. The scene is vividly colourful, theatrical and earthly, save for the halo over James’s head. He holds a sword to the neck of the king of the Moors.

The great art lover Nicholas II, Prince Esterházy (1765-1833), so admired the Dutch golden age that it accounted for nearly half his collection. The Paris exhibition includes all the Dutch genres: a church interior, a Frans Hals portrait of a man in black with a white lace collar, a Rembrandt ink drawing of a peasant house, a delicate still life from Haarlem showing a ham, silver pitcher and nautilus enwrought as a silver goblet. Jan Steen’s Family of Cats is a riotous scene of a family drinking and making music. The seated, heavy-set man is believed to represent the artist.

The exhibition’s commissioners broke the chronology to fill an entire room with intriguing figures, the sort of paintings that stay with one long after an exhibition. Chief among them is a young girl sleeping, painted in Rome around 1615. Neither the identity of the artist nor that of the subject has been established with certainty. She appears to have been crying. Her nose is red, and she clutches a lace-trimmed handkerchief as she dozes on a richly embroidered cloth. The flowers, feather, pearls and beads in her hair are a still life unto themselves.

Canvases by Francisco José de Goya y Lucientes immortalise a knife sharpener and water carrier, ordinary people who resisted Napoleon’s invading army in Goya’s home town of Saragossa. In his portrait of the actor Manuela Camas y de las Heras an intelligent woman looks up from her embroidery, meeting our gaze with a smile.

Edouard Manet’s portrait of Jeanne Duval, the Creole mistress whom Baudelaire called his black Venus, hangs near the Goyas, to emphasise the profound influence of Spanish art on the great French painter. Duval seems to float, Ophelia-like in her white dress, on a dark green sofa. Her stiff leg protrudes blatantly from under her skirt, the central motif in a sea of ruffles.

Although it lacks the grace of Manet’s famous Balcony, painted six years later, there are striking similarities, including the fan held by his sitter. In realist mode, Manet portrayed Duval as she was, no longer beautiful, no longer living with Baudelaire, though still supported by him. She is more strange than beautiful, a sad, fading beauty with dark-shadowed eyes.

The Budapest masterpieces on show in Paris include works by Cézanne, Gauguin, Monet and van Gogh. Exquisite though they are, their style will be instantly recognisable to museumgoers. The real discovery is what Hungarian artists made of impressionism, symbolism and modernism.

In Károly Ferenczy’s Woman Painter a slender woman in a long dress and apron, coiffed with a straw hat, clutches paintbrushes and palette while studying her easel in a sun-dappled garden. The canvas would have been perfectly in place at a French impressionist exhibition.

Mihály Munkácsy lived in Paris for 24 years. He and his wife entertained lavishly, receiving the cream of European society at their Thursday-afternoon salon. With its black and earth tones, Munkácsy’s Man in a Cape could have been painted by Manet.

During Franz Liszt’s visit, in March 1886, to Paris, Munkácsy painted the portrait of Liszt best known to his fellow Hungarians, just months before the pianist and composer’s death.

Works by Arnold Böcklin, Oskar Kokoschka, Egon Schiele and Franz von Stuck in the last room show that for Hungarian artists the pull of Munich and Vienna were as strong as that of Paris.

But József Rippl-Rónai, whose symbolist masterpiece Woman with a Cage is the signature painting for the exhibition, and the last in the show, was, like Munkácsy, most influenced by Paris.

During his years in France, from 1887 until 1900, Rippl-Rónai exhibited with the avant-garde, post-impressionist group called the Nabis. The painter and sculptor Aristide Maillol and the American painter James Whistler were his friends.

The subject of Woman with a Cage holds up a cage, leaning back slightly to contemplate an imprisoned yellow bird. The blue-green background and the woman’s burgundy-brown hat and dress are simple and dark, soft and and peaceful.

The woman’s face and graceful hands seem lit from within, as does the bird and its phosophorescent cage. The effect is ineffable, spellbinding. And although Woman with a Cage was painted in Paris, it too speaks to us of central Europe.

Masterpieces of Budapest: Dürer, Greco, Tiepolo, Manet, Rippl-Rónai is at the Musée du Luxembourg, in Paris, until July 10th