The new owners of Hazelwood, a Palladian manor in Co Sligo, have turned an old textile plant in the grounds into a venue for a huge contemporary art exhibition 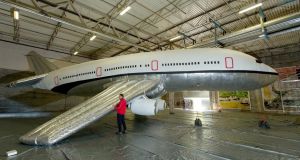 Plane Landing in Sligo by Aleksandra Mir, which is one of the pieces on display at the old Snia/Saehan factory in the grounds of Hazelwood House in Sligo. Photograph: James Connolly 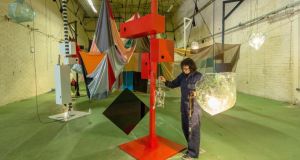 Mikala Dwyer with her piece, Square Cloud Compound (2015) which is one of the pieces on display on the grounds of Hazelwood House in Sligo. Photograph: James Connolly 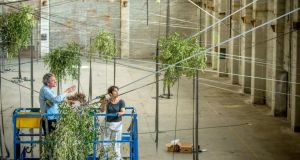 Siobhan Hapaska and her untitled piece which consists of eleven olive trees hanging horizontally as part of the Magnetism exhibition on the grounds of Hazelwood House in Sligo. Photograph: James Connolly 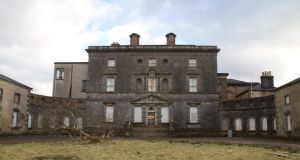 Hazelwood in Co Sligo, Ireland’s first Palladian mansion by Richard Cassels, before the Raethornes bought it

‘It is a ‘what are you doing for the rest of your life?’ kind of project,” says Sue Raethorne. In late June she threw probably the biggest, and certainly the most electronically themed, party that Hazelwood has hosted over the past three centuries.

Since purchasing the Hazelwood estate and its showpiece, a celebrated if neglected 18th-century house on the outskirts of Sligo town and on the shores of Lough Gill, the Raethornes have breathed new life into one of the strangest and most striking architectural contrasts anyone could imagine. Hazelwood came, like it or not, with a vast red-brick factory built by an Italian textile firm in 1969 that has lain dormant for the past decade.

The factory was built with what seems like indecent proximity to the rear of the original house, which was the first Irish Palladian mansion designed and supervised, in 1731, by Richard Cassels, whose future designs would include Leinster House and Powerscourt House. The factory is as vast as an airport hangar and as functional in aspect as the former Wynne family home is ornate and fabulous.

The buildings clash, but when they visited Hazelwood last winter the Raethornes came up with a vision to make companion pieces out of them. They plan to transform the factory into a whiskey distillery and are hosting the estate’s first art exhibition, Magnetism. The distillery and the ongoing exhibitions will, in theory, help to meet the financial demands of restoring the house to its original splendour.

Raethorne says. “It is not somewhere we are going to live. We will have some museum rooms and some rooms to give a history of the Wynne family and their involvement in politics and the military. And we will have a whiskey-tasting room in the basement.

“How it first came about was that David and I sold two businesses last year, and we were looking to invest. We had been thinking about a whiskey distillery and about where you might locate it. And we came upon Hazelwood. And it is idyllic: the climate, and it is an area of conservation, so it will always have a purity about it, and it is surrounded by water, so the temperature will be mild, which will help us to distil a very smooth whiskey. Everything fit.

“And to have that house, the first that Richard Cassells designed here in Ireland . . . It is a place that we keep finding these jewels. So we are very passionate about it.”

It is a brave and bold idea and has rescued Hazelwood from a long, uncertain period when it teetered between slow ruination and the threat of outright demolition. More than 600 people gathered on Saturday for the opening of Magnetism, featuring big artworks from across Europe.

As it happens the interior of the factory is designed as if to host such an exhibition: Downfall, the work of the Belfast-born artist Siobhán Hapaska, is showing in a room 65m long and 20m high. It features 11 olive trees suspended horizontally from steel cables and trembling continuously. Despite its scale, visitors still have a walk in order to view it properly.

Igor Grubic’s Monument, which documents the destruction of thousands of anti-fascist artefacts and statues in his native Croatia, is showing in another wing. Aleksander Mir’s Plane Landing is a vast helium balloon shaped like a jet aeroplane and suspended above ground, in a perpetual state of landing.

Perhaps the most spectacular piece in the exhibition came about by accident, when Lucy Andrews, the Dublin-based artist, saw reams and reams of videotape left scattered on the factory floor since the last occupant, the Korean firm Saehan Media, vacated the building. Andrews spread the lengths of tape across the factory floor and then painstakingly threaded them together and suspended them from ceiling to floor, so that they hang in front of visitors when they walk into that section of the factory. The effect is like seeing an ethereal, endless tree trunk.

“Big reels of videotape are called pancakes, which was news to us,” says Vaari Claffey, the curator of the exhibition. “They are extraordinarily long, and when Lucy saw them, that was that. It was incredibly demanding work. Each pancake is 5,000m long. So very labour intensive, with cherry pickers at the top of the building to hang them from the roof. All of this is unrecorded tape. It fans out with the wind, so it moves, and when the natural light changes it glitters and changes. Lucy has an incredible mind for material. It is all based on how things behave.”

The restoration of Hazelwood House is a project that will easily span the next decade, but the potential for the factory is immediate. “It is staggeringly big, but it is absolutely beautifully built,” Claffey says. “Some people do consider it to be an eyesore, but hopefully when it is housing the distillery it will be seen in a new light.”

It will remain the primary focus of Hazelwood in the immediate years ahead. Planning was granted for emergency restoration work required for the roof of the west wing, but the interior work will be phased out. The Raethornes have already begun to consult Hazelwood Heritage Society, which has gathered early photographs and much information about the Wynne family, the owners, from the original design by Cassells through to the death of Owen Wynne VI, in 1910.

The local connection to Hazelwood remains intense. SNIA, the Italian textile manufacturer, employed 500 people in the factory here, and for them the estate, and the spectre of the empty house, became the workplace. Beatrice McDonald, the chairwoman of the society, is a granddaughter of the gamekeeper who worked on the estate.

The house was last occupied as a private dwelling in 1927, when it was turned over to the Land Commission. It came perilously close to demolition and was later used as a psychiatric hospital, by the Army and by the HSE.

During the Celtic Tiger years the estate was acquired by a development company whose vision featured houses and apartments – and the demolition of the old SNIA factory. The property crash put paid to that. David and Sue Raethorne bought the estate for €550,000 or so last December – a modest sum for such a historic property but a pittance in comparison with the investment that will be required to renovate the house. As Vaari Claffey says, they ransacked the house for copper and fire places when it lay derelict. “ ‘They’ being vandals.”

Already the place has begun to reveal itself in ways the couple never expected. An old ice house has been uncovered. A 300-year-old well that had been bricked in has been relocated. The couple was shown a windmill base at the water’s edge with its piping still intact. The parent company is still operational in the United States; the windmill has been added to the overall project. “Little extra beauties keep throwing themselves up,” Raethorne says. “It is like a fantasy landscape, and it is utterly beautiful.”

The estate does seem to exist slightly outside of time. The front door of Hazelwood contains a perfectly framed view of Benbulbin. It has been a long time since anyone has been able to stand there and enjoy it, but, at some unspecified date, the front door will be open again. In the meantime two of the largest copper stills in Europe will be installed in the factory once the warehouse has been properly bound. There is no absolute decision on what the whiskey will be called when production begins.

“We are kind of spoiled for choice,” Raethorne says. “All I’ll say is that Hazelwood is a very beautiful name and very evocative. And so is Garavogue. It is the smallest river in Ireland and runs down the line of the property. And there is Garavogue water coming into the well. But Hazelwood itself is a beautiful name, and my hunch is that it will certainly be well considered.”

Magnetism is at the Hazelwood estate until September 27th

50 Irish graves to visit before you die
5

Is it not time we celebrate Ireland and Britain’s closely intertwined culture?
9