Room with a view: How David Hockney created digital art for a lockdown 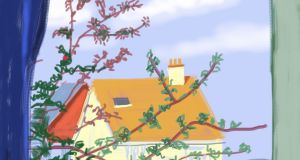 There are many ways in which David Hockney is a prescient genius, but how could he have predicted lockdown? Hockney has been mainly famous for his portraits, photomontages, and paintings of sunlit swimming pools and beguiling forests. But in 2009 he began experimenting with making art on an iPhone. This was greeted with dismay from some critics and delight from others; a core subject was the view from his bedroom window in Bridlington, East Yorkshire.

Now, a book from fine art publishers Taschen, My Window, collects 120 images made by Hockney, on iPhone and later iPad, between 2009 and 2012. Arranged in chronological order, they catalogue the passing of time, seasons and also emotional states. Seen in 2020, as our worlds open up, and also as the threat of possible future isolation lingers, they create a poignant document of that sense we have all recently experienced: of containment and expanse, interior and exterior life, and time passing by as we remain in a strange sort of suspension.

The project takes further the idea explored, to darker intent, in Alfred Hitchcock’s 1954 film Rear Window (itself based on a short story by Cornell Woolrich). That enforced focus, and a reduction of scope, paradoxically opens up new horizons. And what better way to make sense of being housebound than through the eyes of an artist who has made it his life’s work to understand the crux of the balance between looking, seeing and feeling?

Hockney began his explorations with digital art back in 1985, working with an early computer programme, Quantel Paintbox. He switched to iPhone in 2009, using his thumbs to make the drawings, usually of bouquets of flowers, which he would send to his friends. Recalling the reaction at the time, Hockney said, “People from the village come up and tease me: ‘We hear you’ve started drawing on your telephone’” […] “And I tell them, ‘Well, no, actually, it’s just that occasionally I speak on my sketch pad.’”

When the iPad came out, Hockney moved on, swapping thumbs for a stylus, and adding detail to the resulting drawings, which are printed out on a high-definition inkjet printer. Commenting on a 2012 exhibition of these works at London’s Royal Academy, the Guardian’s Adrian Searle wrote: “There’s something inescapably dead and bland and gutless about them,” adding, “openness to technical innovation is one thing, art another”.

Even a casual glance through My Window gives the lie to this opinion. Writing in his preface to the book, Hockney says that “there was a great advantage in this medium because it’s backlit and I could draw in the dark. I didn’t ever have to get out of bed. Everything I needed was on the iPhone.” He describes learning to leave his blinds and curtains open, to allow the sun to waken him. “I would never have thought to do a sunrise without the iPhone.”

In the book, the earlier iPhone drawings are about colour, gesture, light and dark, and it is fascinating to see nuance emerge, as the artist’s eye adjusts to the medium, but also as the medium itself evolves. Lines become more subtle, details emerge, but so too does Hockney’s familiarity with the constraints of his chosen view. A crane appears over a neighbouring house; rain falls; details of the window frame take up a stronger significance; flowers come and go; a coffee pot gleams. It’s like we’re witnessing the progression of a meditation.

Hockney long had a fascination with lenses before the iPhone and iPad. In 2001, his book Secret Knowledge caused waves in the art world as it put forward the persuasive thesis that artists, including Caravaggio and Vermeer, must have used lenses, whether camera obscura or other arrangements of mirrors and a light source, to create projections through which they achieved the extraordinary depth of detail in their works.

There is an interesting layer to this. Painters who insist that one must paint from life in order to maintain the three-dimensional nature of their subject, even as they translate it to the two-dimensional canvas, now have to consider how these artists tackled problems of depth and perspective with this dual approach.

Looked at that way, painting and photography is always a lie: the lie of the idea of a flat image, the lie of a single perspective, the lie of a frozen microsecond of a moment in time. Hockney has explored all these too. His photomontages offer the possibility of multiple viewpoints, and here his gently relentless depiction of the same view opens up the idea of evolving time.

For some in the art world, Hockney’s popularity, and his desire to experiment, has been a sort of reverse proof of his seriousness, or lack thereof. He is definitely popular – on many fronts. Exhibitions such as the Royal Academy’s are blockbuster. For a time he and Jeff Koons played tag with one another as the World’s Most Expensive Living Artist at Auction. In 2018, Hockney’s 1972 Portrait of an Artist (Pool with Two Figures) sold at Christie’s for $90 million, dislodging Koons’s Balloon Dog (Orange). The record held for six months, until Koons took it back when his Rabbit sold for $91 million, again at Christie’s.

For some reason, I have a feeling that the idea of being sandwiched between a dog and a rabbit in the annals of auction house fame would delight Hockney, who, while being an exceptionally serious artist, has always eschewed studied seriousness as a mode of being.

Born in Bradford, England in 1937, Hockney studied at the Royal College of Art. He was always something of an iconoclast, and the authorities at the Royal College were so impressed by his talent, they changed their rules in order to award him a diploma – he had refused to write a thesis for his finals, insisting he be assessed solely for his work.

Looking at the works in My Window, and the critical reaction such as the Guardian critic’s, it is tempting to wonder if it may have been similar in Paris in the 1860s, when the art establishment rejected the work of Manet, Pissaro, Cézanne and their colleagues, earning it the derogatory title of “Impressionism”.

What are we to make of something so new, so different and sometimes so seemingly simple? Perhaps a better way to see it is an invitation to stretch our own minds and to see again, but differently.

The world has since caught on. Mostly. In 2018, Hockney’s iPad design for a new window at Westminster Abbey was unveiled. The window, a bright, almost naive country scene, was commissioned to celebrate the reign of Queen Elizabeth II. Speaking at the window’s inauguration, John Hall, the dean of Westminster Abbey, said that the queen had seen a sketch of the window, but it was hard to assess her enthusiasm. “The queen very often doesn’t give you a very strong reaction,” he said; a model of ecclesiastical tact.

Hockney no longer lives in the house with the view through the frame of the streetlamp, occasional crane, neighbouring roofs, trees and vases of flowers that come and go. A year after the My Window series concluded, his 23-year-old assistant, Dominic Elliott, died on the premises, the inquest recording an intake of alcohol, drugs and drain cleaner, and pronouncing death by misadventure. Two years later, Hockney sold the house and moved on.

Many of his most famous works have been influenced by the intense sunshine and swimming pools of California, where he has had homes since the 1960s.

Looking at the days and nights, recorded from the viewpoint of this otherwise very ordinary bedroom window in Yorkshire, there’s a different kind of intensity at play: the intensity of the passing of time, the changing light, the fluctuating emotional registers, and all the minor (and major) triumphs and tragedies that take place within a house, within a life, within a single room.

My Window by David Hockney is published by Taschen as a limited Collectors Edition of 1,000, signed by the artist for £1,750. Two further Art Editions, including a print, signed by Hockney, are available in editions of 250, for £8,500 and £10,000 respectively. taschen.com