Mapping the State: Ireland as you’ve never seen it

In a country full of quangos, State boards and semi-State bodies, it can be hard to get to grips with the sheer scale of the State’s agencies. A new map aims to change that

‘We didn’t call it ‘the state we’re in’, or ‘look at the state of us’. It’s Mapping the State. And it’s very deliberately meant to be nonpolemical,” says JP O’Malley of Zero-G, a Dublin design agency.

He was part of the team that has created a new visual aid to help people understand and navigate Ireland’s legislative, judicial, executive and local-government structures.

It has been done using a map, but not in a way that resembles any country we know. Instead this map of the Irish State is made up of parts of countries and islands around the world – including some choice selections, such as the Cayman Islands to represent AIB.

The map is sectioned off by borders and seas into four neat areas: the courts, the House of the Oireachtas, Government ministries, and city and county councils.

Ministries make up the bulk of the map. They occupy the largest land mass, with borders dividing them. Ferry routes lead from departments on the mainland to the islands that represent particular State agencies.

The size on the map of each Government department is determined by its budget allocation for 2015 and by its proximity to the centre of power: the Taoiseach. On the full map his office sits on the highest contour. (The simplified version on this page lacks contours and the ferry routes, among other features, to make it easier to read in a newspaper. The original, in all its glory, is about two metres wide.)

Although the budget allocations came from the Department of Public Expenditure’s 2014 figures, each ministry’s proximity to power was determined by Zero-G. Its choices will spark much discussion – or so it hopes. 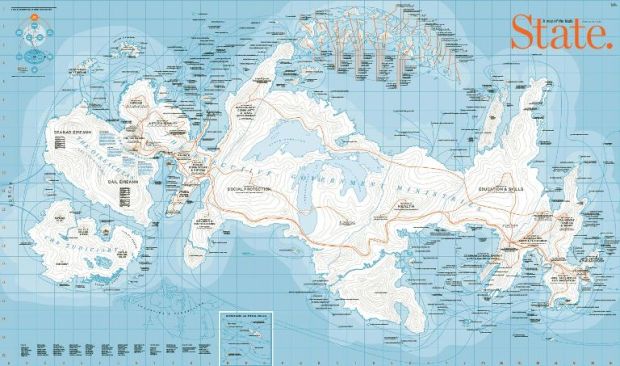 “These are placements based on our gut feeling . . . and what we’ve seen over the past few years,” says O’Malley. “Our gut feeling would be that Justice and Equality has a lot of power.”

The same could not be said, he adds, for the Department of Arts, Heritage and the Gaeltacht. “Even though it’s really important in terms of national profile, in terms of funding, the drop since the recession might suggest that is not as important as other aspects.”

“Local government is placed further away,” he says, “because would you think that local government, in terms of the State, has a lot of power? This is just opinion. We’re not stating it as fact; we are stating it to start a conversation.

“We’re not political scientists, but we wanted to engage people in thinking about the State more completely and coherently, and to debate with us and to ask us to shift things. So people might vehemently disagree with us – and they might change our minds.”

The core Zero-G team of O’Malley, Ciarán ÓGaora and Stephen Ledwidge all have an interest in current affairs. They worked on the map during their spare time after being invited to create the project as part of ID2015 Year of Irish Design.

The budget allocations, along with Zero-G’s perception of power, weren’t the only factors in deciding where to place departments. Making the map visually appealing and accessible was one of the most important elements in putting it together.

“More of the thought would have been on the construct, and on the connections and clusters,” O’Malley says. “There’s a visual beauty for what we are trying to achieve with the map, so it needs to have a natural stretch to it.

“It needs to have that type of shape to look interesting and look engaging. Otherwise it’d just be a circle with lots of pie slices. The devil is in the detail of the map.”

The map is rich in detail, including explainers on the structure of the judicial system and the role of the Government.

“We found that no one had mapped the State,” O’Malley says, “but there was a body called the Irish State Administration Database at the UCD Geary Institute for Public Policy. They had listed all the parts of the State and had developed a set of criteria, which was what we were looking for, because we needed to figure out what’s in and what’s out.

“So we based it primarily on their criteria. We included everything they have and a bit more, such as the names of Ministers or the names of CEOs or the various secretary generals, which we researched ourselves.”

Several academics fed into the construction of the map, which Zero-G says is like the State and will be “a living, ever-changing thing”, updated regularly.

With so many sources involved, the designers say there is sometimes a time lag in updating changes. Mapping the Court of Criminal Appeal instead of the newly incorporated Court of Appeal, for example, will be updated by the team – and is exactly the type of omission they want the public to contact them about.

Along with informing the public and encouraging debate, O’Malley is proud that the map is also a snapshot of Ireland’s priorities. “You can see from this that we are very high on social issues: health, education and social welfare are large areas of funding. But if you matched this with the UK or US, defence, for example, would be a much larger piece. It’s really interesting that you know how the state of Ireland is perceived.”

Pop artists Warhol and Haring in Dublin and Belfast exhibitions