Joe Wilson will bring the mountain to you

Visual Art: The Twelve Bens are vividly captured in Wilson’s picture book; plus reviews of Kevin Cosgrove and selected works from the collection of Pat and Antoinette Murphy 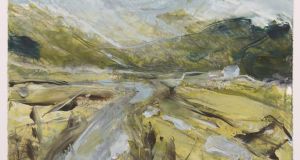 From Joe Wilson’s book ‘Into the Mountains: Images from the Twelve Bens’ 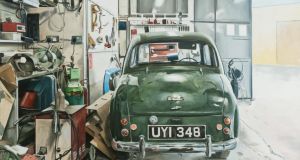 Occasional Press was established by artists David Lilburn and Jim Savage with the aim of doing art-related publishing projects that particularly appeal to them. Over the years they’ve worked with a succession of artists and poets, including Dorothy Cross, Tony Curtis, Peter Fallon, Sue Hubbard and Donald Teskey. They’ve also anthologised John Berger’s writings on drawing, something of a publishing coup.

Many of their publications are produced in collaboration with Ballynahinch Castle in Connemara, as is the case with one of their more recent publications, Joe Wilson’s Into the Mountains: Images from the Twelve Bens, with an essay by Colm Tóibín. Works in the book made up an exhibition during Clifden Arts Week.

The book is linked to an informal residency at Ballynahinch, which is propitiously located on the mountains’ doorstep. For Wilson, who has a wiry frame and a rugged, weather-beaten look, hill walking is as significant an undertaking as making art. It’s inextricably enmeshed with his art. It’s often said of an artist that he or she conveys the feeling of being in the landscape, but it’s hard to think of an example as extreme as that represented by Wilson.

On occasion he gives up entirely on describing what a piece of terrain looks like, least of all in any conventionally picturesque sense, and concentrates on what might be termed “the weather”. You feel the slippery wet rock, the running water, the soggy peat, feel the chill of the air and perhaps glimpse a promising path through the enveloping mist and cloud. You wouldn’t recognise the mountain if you saw it on a picture postcard, but you know what it feels like to be two hours into an arduous walk along its spine.

It’s a working process that is well suited to making a picture book, because you experience the mountains in instalments, as a series of sketches. Each piece, whether monochrome or in colour, is comfortably self-contained and complete. But Wilson is reluctant to pin down a process, making monoprints, sometimes painting on to monoprints, ink drawings and pencil drawings. They are all in a sense sketches, because none claim to be a definitive overview; all are moments caught during a walk. Willem de Kooning coined the phrase “slipping glimpses” for his landscape compositions, and that seems particularly appropriate to Wilson.

Wilson was born in England in 1947 and taught in art schools before moving to Ireland. He was a lecturer at NCAD from 1983 until he retired. Early on, his work took a different direction, bringing conceptual structure and archaeological method to documentations of garden allotments and a farm in Co Limerick. His own wild garden in Co Wicklow spurred a significant transition towards dealing with the sprawl of nature encountered in the moment. He subsequently made three-dimensional paintings in his pursuit of capturing the immediate reality of the landscape. Into the Mountains is a pure expression of this aim, and an invigorating work of art caught between two covers.

Selected works from the collection of Pat and Antoinette Murphy

Pat Murphy has been integral to modern Irish art through his roles as chairman of ROSC and the Arts Council, and arts adviser to the President of Ireland and the Office of Public Works. He and his wife, Antoinette, have also been exceptionally active as collectors. This exhibition gives an idea of the breadth and quality of their collection. The roll call is impressive, from Blackshaw to Warhol (Blackshaw may have won that one on points). It also reflects a personal passion, with fine pieces by Barrie Cooke, Albert Irvine, Sam Francis and many more. The Clifden Arts festival audience was appreciative.

Workshops featured prominently in Kevin Cosgrove’s standout NCAD graduation show in 2007, just as they have in his work since. Remake, his third solo exhibition at Mother’s Tankstation, focuses on several kinds of workshop, from the relatively neat and institutional Museum Workshop with Coats to the personalised clutter of Radiator Repair Workshop. Cosgrove clearly likes the idea of a space where things are made, repaired or restored, as in the title work, featuring a vintage Austin A35. The feeling of potential and possibility is increased by the absence of people. All the elements are poised, awaiting their return.

Ideas of labour, skill, attentiveness, aesthetics, knowledge, order and chaos are bound up in subject and treatment. Technically adept and assiduous as a painter, Cosgrove is on the side of Manet and Velázquez. Like them, he only uses as much of anything – pigment, colour, detail – as it takes to get the job done. Look closely at the paint surface and it’s surprising how little is there, physically, given the textural richness and conviction of the images. In Workshop with Mirror (You Are) it’s as if he adroitly pays homage to Manet’s masterpiece A Bar at the Folies-Bergère, recasting it as, of course, a workshop.

Since 2007, he has become increasingly and rewardingly absorbed by the question of how to paint light, as seen in the paintings in Remake. Until Nov 1, motherstankstation.com