Pieces were made for churches in Ireland, Wales and New Zealand but never installed 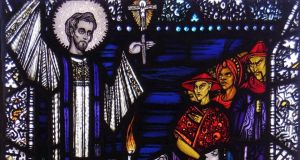 A collection of stained glass windows from the Harry Clarke Studios has come to light and is to be sold at auction. Photographs supplied by Fonsie Mealy Auctioneers. 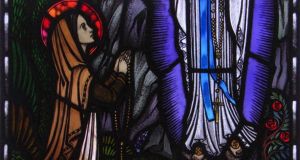 A collection of stained glass windows from the Harry Clarke Studios has come to light and is to be sold at auction. Photographs supplied by Fonsie Mealy Auctioneers.

A collection of stained glass church windows from Dublin’s renowned Harry Clarke studio has come to light and is to be sold at auction later this month.

The windows were made for churches in Ireland, Wales and New Zealand but were never installed.

They were inherited by the late David Clarke – son of the studio’s founder, Harry Clarke – and are now being sold by his family.

But the collection – valued at up to €25,000 – is to be broken up and the windows sold individually.

Fonsie Mealy Auctioneers said the windows “for one reason or another” had not gone to the church or institution for which they had been commissioned. They will be sold in the firm’s fine art auction on July 21st.

He personally created 160 windows, including The Eve of St Agnes – which is now in the Hugh Lane gallery – and six windows for Bewley’s cafe on Grafton Street.

The master craftsmen in his studio, which closed in 1973, also made windows by commission for churches throughout Ireland and worldwide.

Auctioneer George F Mealy said the collection had been in storage for safekeeping since the 1970s in Drumcondra’s All Hallows College, the former seminary, which has now closed.

“There is no explanation as to why these windows never left the studios,” he said.

Some of the windows are unsigned but some are known to be the work of particular craftsmen.

Among the collection are two windows depicting St Francis Xavier which were commissioned for an unknown church in Co Kilkenny but never collected.

The largest, a three-panelled piece measuring about 8ft by 2ft, has a pre-auction estimate of €7,000-€9,000. A beautifully exotic image entitled Saint Francis Xavier preaching in the Orient has an estimate of €2,500-€3,500.

A companion window depicting St Francis Loyola has already been sold from the collection to Carlow College, where it is installed in the library.

Two of the windows – God the Father and Adam and Eve – were designed for a church in New Zealand but, again, never dispatched. Each is estimated to sell for between €3,000 and €4,000.

It was originally commissioned, and paid for, by a church in Fishguard, Wales, during the second World War but never delivered after the parish priest there apparently baulked at the shipping costs.

The windows will go on public view at Fonsie Mealy Auctioneers’ saleroom in Castlecomer, Co Kilkenny, from Sunday, July 19th.

Anne Enright: ‘Nuala O’Faolain was an impossible person, to whom we owe so much’
9 The passionate psychologist
10