Local youngsters are being recruited to help out on ‘Our Nation’s Sons’ project, which aims to display murals in six cities across the country this summer 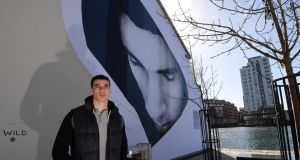 Jordan photographed standing in front of a mural of himself by Joe Caslin on the gable wall of a house in Grand Canal Dock. Photograph: Brenda Fitzsimons 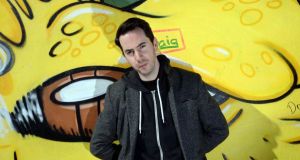 A group of hooded young men staring down from a wall tends to make passersby feel uneasy, suspicious of intimidation or potential aggression. But an art teacher in Tullamore, Co Offaly is trying to change such perceptions and make people think more reflectively about young men in Ireland today.

Our Nation’s Sons is a project by art teacher and illustrator Joe Caslin in conjunction with local youngsters, and this year they are erecting huge portraits of young men across Ireland. The impetus for the project is twofold, he explains.

At the coalface
“Being a teacher, you see these kids day in, day out. So you’re at the coalface really. You see them walk through your door into the classroom, and for a lot of them it’s not really a great place to be the last five or six years.

“Unemployment is massive, and emigration is massive. We did a survey in the school where six in 10 pupils knew someone unemployed in their family, so that’s brothers and sisters and parents.”

The second thread of inspiration was Caslin’s own experience. “I’ve gone through the boom and the bust. I’m 30 now, and my mates would have had great jobs; now some of them are back in their parents’, or they’ve emigrated.”

The portraits have been interpreted as a commentary on the social isolation of young men, issues surrounding suicide, how society perceives young men as a menace, and more.

The rate of suicide among men aged up to 19 is 2½ times that of women of the same age.

Despite these figures, there is no national strategy for the prevention of suicide or self-harm in Ireland.

“People can read loads of different things into it. But it’s to do with the potential in a community, because they don’t really have an outlet,” Caslin said.

“Instead of going home and playing PlayStation for six hours, and killing 96 lads in a game, this is that they’re doing something positive in their community.”

Caslin has pasted portraits on Achill-Henge, the stone structure erected by disgruntled property developer Joe McNamara. He previously worked in conjunction with Edinburgh City Council and Heritage Scotland on a similar project across Edinburgh.

“I recruit a bunch of lads from the area, then we do the drawings and when the drawings are ready, we blow them up massive. And then the kids are part of the work, so they’re part of an apprenticeship.”

Caslin films his projects and makes sure that the young men are involved in that process. “They might be working with the director, or with the sound engineer. I don’t just go up and stick up a picture. It’s more of a legacy thing.”

A documentary he made on Our Nation’s Sons will premiere at the Galway Film Fleadh this year.

This summer, he is hoping to activate the project across several Irish locations.

“It could have been a small project, but we’re putting up stuff in Dublin, Limerick, Waterford, Cork, Galway, Belfast. It’ll be a six-city project. We’re trying to get six cities during the summer and get stuff up, so every corner of Ireland will be able to reflect on it.”

The latest portrait is on the gable wall of developer Harry Crosbie’s house in Grand Canal Dock.

Caslin financed the project himself until receiving an award from the Arthur Guinness Projects fund last year, allowing him to expand.

“It’s difficult for young lads. And what you hear is not representative of what’s happening,” Caslin said.

‘Hoodies, gangs’
“You know the kids who were out for Paddy’s Day and that video of that lad hitting the guy in the face? That’s the perception: hoodies, gangs. When a group of kids are walking down the street there’s a sense of fear or panic, or not wanting to engage.

“But that wasn’t the sense when I was a kid. When you go in and talk to them, encourage them, motivate them, you get a community back together.

“It’s a really difficult time. There’s no jobs at the minute. How many thousands of people are we losing to emigration? You go straight from college and then you’re gone.

“There’s no way around it. But these kids are willing to engage. I went into the school in Pearse Street and explained to the principal what I was doing. The school said ‘fair play to you, if you can get them to do it, go ahead’.

“And every single one of those kids who is involved is completely involved. They’re actively turning up.”

‘North Dakota, nul points’: Why the American Song Contest can never be as bizarre as Eurovision
8