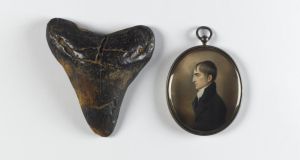 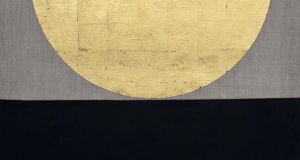 A detail from Patrick Scott’s Meditation Painting 28 (2007). Collection Imma and courtesy the artist and the artist estate

There’s a quote, attributed to Manfred Eicher of ECM Records, that goes like this: “There’s no such thing as new music, there’s only new old music.”

In a similar spirit, you could say that in Trove, her selection of works and objects from seven national galleries and museums (Imma, Crawford Art Gallery, National Gallery of Ireland and sections of the National Museum of Ireland), Dorothy Cross sets out to make some new old art.

She is entirely personal in her curatorial approach, calling up the instincts she uses in creating her own work and letting them roam freely through the nation’s galleries and storage rooms.

The resulting exhibition is a cabinet of curiosities, with groups of pieces carefully sited in the many rooms of Imma’s Garden Galleries. It is a collection of pre-existing pieces but, in the way it’s put together as a series of quirky juxtapositions, it’s also close to being a work by Dorothy Cross, a sort of museum remix. Very close, in fact, because in her habitual way of working she is drawn to found objects, acquires them, lives with them, teases out what it is about them that fascinates her and then uses them sculpturally, generally without altering them materially, but in altered contexts (indeed, one of her own finds may have found its way into the show).

Because her work is steeped in the use of found materials and in natural history, she’s the ideal artist to take on the challenge of looking outside the conventional parameters of fine art. It’s refreshing to see three stunning fossilised ammonites from England’s Jurassic coast in an art museum. Equally the báinin jacket, drár bán, pampooties and Halloween masks. There’s animal architecture in the form of birds’ nests.

Her attention to detail is impressive. Each room is conceived as a self-contained unit of connections and relationships. Often the links are primarily visual or literal, but then open up other layers of meaning. The bald pate of Jan Lievensz’s Head of an Old Man is juxtaposed with a disconcertingly large elephant bird egg from Madagascar and a penguin egg picked up on an island near Antarctica in 1950.

A ring of late Bronze Age globular gold beads, pure abstract forms, from Tumna in Co Roscommon, are displayed next to one of Patrick Scott’s gold leaf Meditation Paintings and an intricate model of the solar system with a golden sun at its centre. In the basement, a number of portrait miniatures are displayed in a case. On the opposite wall, Thomas Ruff’s Portrait 2001 (A Rooters) is a larger-than-life, frighteningly sharp head-and-shoulders photograph of a young woman. Miniature and enlargement depart from our normal mode of vision in opposite directions.

There’s a recurrent sense of work in progress, with sketchbooks and fragments recovered from the storerooms, packing crates used as plinths and wooden braces left in place. That’s appropriate for a show that invites us to do our own detective work, to figure things out for ourselves.

Rather than implying that there’s one big truth governing her selection, Cross gives us lots of little truths, and that works really well. Her one misstep is a procession that alternates whale skulls with marble busts, making a kind of spine. A nice idea, but perhaps a bit cumbersome in its execution. Until Mar 8, imma.ie

In outline, Damir Ocko’s Studies on Shivering might sound a little pretentious. It is part of a larger project that proposes “the shivering body as a metaphor for resistance and unrest”. The title of the 20-minute film at the centre of the show, TK, derives from the phonetic sound of chattering teeth or stones clattering on to the ground. In the film, Ocko situates a performer, then performers, in a bleakly beautiful frosty, freezing, misty landscape. They wear only underpants. Sequences of the sturdily built young men standing shivering in the palpable cold (there’s a certain erotic frisson) are intercut with close-ups of a trembling hand trying to write words on paper. The hand is that of an older man, named as Giuseppe Ianuzzi, who, Ocko intimates, has Parkinson’s.

That simple alternation, between shivering, semi-naked standing figures and the effortful writing, form the film’s structure, but its audio elements, poetry and music for strings, are integral. The eight-part poem is evocative and free-ranging in its imagery. It’s hard to get an handle on it at first, but the artist helpfully notes that the essential progression is from “a morning song” suggestive of routine, order, stability and familiarity to increasing loss of control and unrest.

The same logic applies to the film overall. The young, healthy bodies gradually succumb to the teeth-chattering cold despite their efforts to remain calm and serene in the landscape. The writer clings to the vestiges of control. The film exudes a melancholy, elegiac quality. The metaphor might sound forced, or schematic, but in the event it doesn’t come across that way and the work is quite touching.

Ianuzzi’s writings on paper are exhibited, as are the sheets of the film’s score. At least, that’s the description given to them. They do feature the text of the poem and instructions for the music, but they’re something more: complex collaged drawings, made with precision and flair, expressive works in themselves. TK asks for a leap of faith on the part of the viewer, and more than rewards it. Until Jan 24, templebargallery.com

Paschal Donohoe on The Economics of Belonging: Crisp analysis of discontent
10

So what is the meaning of Lowery’s existential fable ‘A Ghost Story’?
Real news has value SUBSCRIBE