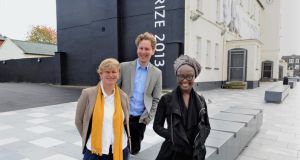 The most surprising thing about this year’s Turner Prize exhibition, which opened last night, is that it’s taking place in Derry. It’s a far-flung venue for what has been, until recent years, a London-centric affair.

Now Tate Britain alternates with other locations year on year. Liverpool and Gateshead have hosted it but this is the prize’s first offshore excursion.

In fact, Derry has form when it comes to the Turner.

The city is closely associated with two of those who were shortlisted in the past: curator Declan McGonagle, who ran the internationally respected Orchard Gallery there; and the artist Willie Doherty, who is the subject of a major survey exhibition in the city at the moment.

Working closely with Tate, Derry has made a great job of hosting the Turner in part of the refurbished and remodelled complex at the former barracks at Ebrington. Two of this year’s five jurors are Irish. They are Dutch-based curator Annie Fletcher and Declan Long, a lecturer at the National College of Art and Design. They and their companions, with Tate Britain director Penelope Curtis in the chair, have come up with a shortlist that sets great store by audience involvement.

Two of the four featured artists ask us to roll up our sleeves and get involved.

The versatile David Shrigley invites us to join in a life drawing class. The model is a comically misshapen, oddly proportioned, animatronic male mannequin who occasionally pees in a bucket. Visitors’ drawings of the figure line the walls.

Given the nature of the subject, the images are bound to look off-kilter, and part of Shrigley’s point is that there is no right or wrong way to draw.

Tino Sehgal, who featured at IMMA to great effect earlier this year, deploys “interpreters” who engage visitors in conversations about “what kind of society we would like to live in”.

That may sound a little dry and abstruse but it’s not – and experiencing his work has proved to be phenomenally popular and rewarding for many hundreds of participants.

“How will you react?” ask posters all over town, recalling the Turner’s reputation for courting controversy. In the event there’s little that should prove controversial but a lot to think about.

‘You can’t but conclude, the least safe place for any of us this weather is in our homes’
6

What the Irish did for – and to – the Choctaw tribe
10

Careless whispers: how the German public used and abused the Gestapo
Real news has value SUBSCRIBE